[Review] ‘It Ends With Us’ is an empowering, yet heartbreaking novel that everyone should read 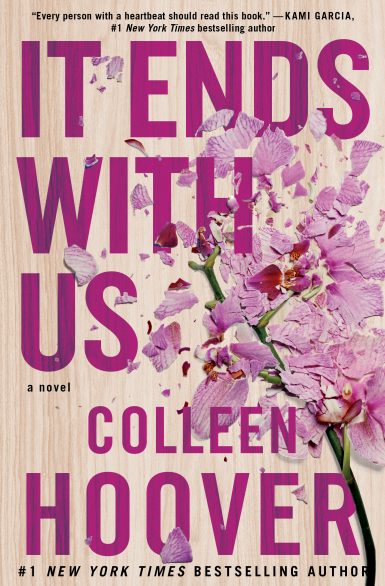 It Ends With Us by Colleen Hoover is a wonderful book about love and heartbreak.

After scrolling on TikTok, a popular social media platform, for all of five minutes, I had seen nearly 10 book recommendation videos. Of all the videos, there was one book that was repeatedly a top pick from readers all around the world. “It Ends With Us” by Colleen Hoover, a New York Times #1 Best Selling Author, is presumably one of the most popular books on the internet right now, despite the fact that it was published in 2016.

With no prior knowledge of the plot of the story, I finally caved in and read the book in a total of two days.

The novel follows the life of Lily Bloom, a 23-year-old, red-headed woman living in Boston with a dream of opening up her own flower shop. She meets Ryle, a handsome neurosurgeon who is strongly against serious relationships.

When Lily buys the storefront for her floral shop “Lily Bloom’s,” an overly generous housewife by the name of Allyssa volunteers herself to aid in setting up the store. They quickly become best friends. Coincidentally, Allyssa is Ryle’s older sister, which forces Lily and Ryle to be more connected than they intended.

Lily can not seem to get Ryle out of her head, and Ryle is crazy about Lily. After months of flirtatious conversation and occasionally sneaking in passionate kisses, the pair start dating and sparks fly. Their relationship is stronger than ever until Lily runs into her teenage flame.

Throughout the story, Lily reads her old journals filled with letters, more so diary entries, that were humorously addressed to Ellen DeGeneres. Being a superfan of The Ellen Show, Lily was convinced DeGeneres would love her if she got to know her, despite never sending any letters in. In these letters, 15-year-old Lily talks about meeting and falling in love with Atlas, a homeless boy who was living in the abandoned house behind her own home.

She would sneak him into her house and provide him with food, water and clean clothes. Even though she seemed to have acted as his protector, the boy was her savior from her father, who physically abused her mother. The unofficial couple separated when Atlas moved to Boston to live with his uncle in a real home, but they promised to find their way back to each other.

The book highlights abusive relationships in both Lily’s past and present life. The heartbreaking story pushes the theme that the people that love us the most can be the ones that hurt us the most. This theme relates to the abuse Lily’s mother endured from her father and the physical and psychological abuse Lily faces from the person that I least expected, Ryle.

The raw emotions Hoover excellently wrote and embedded into her characters make the story extremely powerful, sad and painfully truthful. There is an overwhelming amount of cleverly placed details in the beginning that connect to the end of the book. My favorite symbolic object is a refrigerator magnet that Atlas gave Lily as a teenager, which shows up in her and Ryle’s apartment. The moment Ryle discovered where the magnet came from shifted the story from a sappy romance to a dark and complicated heartbreak.

I dove into the book thinking it was going to be a simple love story or a cheesy romance novel at best. I was embarrassingly mistaken when I found myself crying in my room after reading the incredibly personal and vulnerable author’s note Hoover had left for her readers.

The novel had me audibly gasping at the plot twists. Hoover’s incredibly honest writing style made me fall in love with and feel the heartbreak of the characters all at once.

“There is no such thing as bad people, we’re all just people who sometimes do bad things,” is my favorite quote from the book and is something that I think people should take into deep consideration.

The strong messages about making difficult choices in the most complicated of situations are of great importance to young women everywhere, especially those who are in committed relationships. Although fictional, ‘It End With Us’ is a novel that shows that, sometimes, walking away is the right thing to do.

Hoover geniously made me fall in love with and hate characters within a span of 367 pages. The book has definitely left a permanent mark on my mind and heart. I hope other readers found this book as empowering as I did and find how the relevancy of this story could be helpful to women currently.