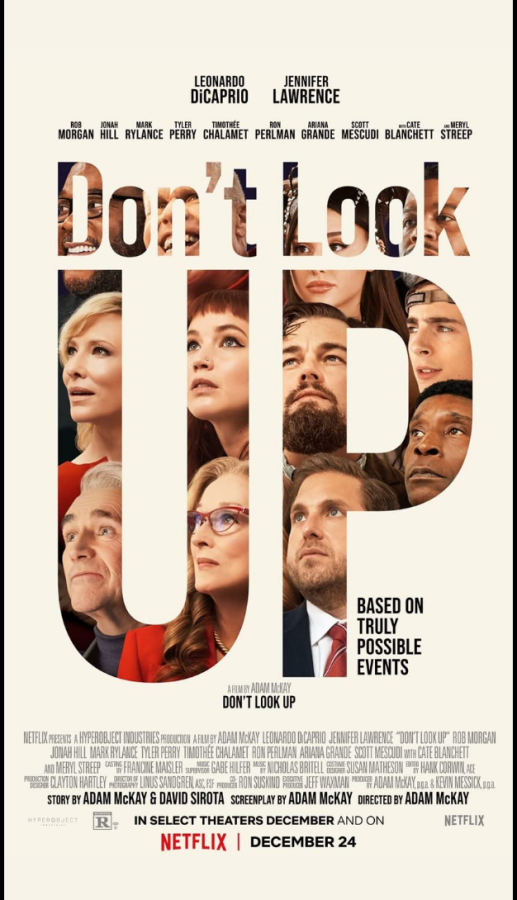 'Don't Look Up' is a satirical comedy that was released Sunday, Dec. 5 on Netflix. The film has a star-studded cast including Meryl Streep, Leonardo DiCaprio, Jennifer Lawrence and Timothée Chalamet. Photo courtesy of IMDb

On Sunday, Dec. 5, the movie “Don’t Look Up” was released to the popular online streaming platform Netflix. Garnering a score of 56 percent on Rotten Tomatoes, the movie received both positive and negative acclaim from its viewers.

“Don’t Look Up” has elements of satire, comedy, drama and science-fiction. The film, although long with a run time of two hours and 25 minutes, seemed to go by very quickly.

At the beginning of the film, we are introduced to a world similar to our own, where people are glued to social media and too fixated on tabloid news to be concerned about real-world issues.

This movie opens with Michigan State University astronomy Ph.D. candidate Kate Diabasky, played by Jennifer Lawrence, examining the sky through a telescope. While studying the stars, she discovers a previously unknown comet located just outside of Jupiter.

At first, Diabasky and her professor Dr. Randall Mindy, played by Leonardo DiCaprio, are excited about their findings. However, the celebrations soon turn somber as he calculates the future path of the comet, only to realize that it will impact Earth in approximately six months and 14 days. Moreover, the comet is large enough to start a set of chain reactions that will result in a worldwide extinction event.

The comet and the crisis surrounding it are used as an effective metaphor by McKay to critique current trends in our society, such as being obsessed with technology and pop culture. He also takes aim at the media and how they sensationalize even the most trivial of stories.

The film, similar in style to Saturday Night Live sketches, was satirical and comedic. The various and strategic jokes throughout the movie helped the audience laugh, even when the bigger plot was much more frightening.

Feeling discouraged from the lack of interest from the president, Dibiasky and Mindy leak the news to the media, but the hosts treat the topic frivolously and the actual news about the comet’s threat receives barely any public attention.

As the comet continues to move closer to Earth, people debate over what the proper action to take is, or if the comet even exists.

With characters alluding to a range of figures from Elon Musk, Jeff Bezos and Mark Zuckerberg, to Donald Trump, Ivanka Trump and Megan Kelly, no one escapes McKay’s wrath as he sets out to ridicule current events in America.

While the film is clearly satire, it does provide a scarily accurate portrayal of our current society’s tendency to push away difficult-to-swallow truths. Through displaying a world where people heavily rely on social media rather than science, the film is relatable to our lives today. The movie also touches on climate change, an event scientists have warned us about for years.

Overall, I thought that this movie was very entertaining and thought-provoking. Throughout the movie, I caught myself noticing parallels to our own society and jokes that referenced current events. I thoroughly enjoyed this film and would recommend it to others.