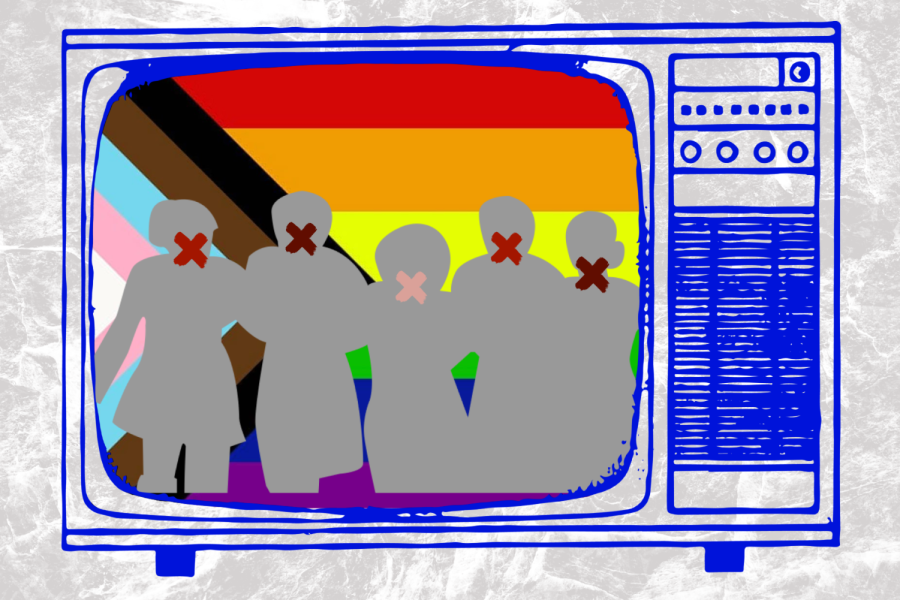 Queer voices have been silenced throughout media platforms, which is very detrimental to the LGBTQ+ community.

While in recent years society has made great progress in welcoming open dialogue regarding LGBTQ+ issues, we still have a long way to go in terms of complete acceptance. With the rise of new positive discussions, such as the recent normalization of non-binary and gender fluid pronouns (they/them, she/they, he/they, etc.), it may seem easy to overlook existing problems. However, it is beyond important that we do not.

Lately, many LGTBQ+ artists and influencers have noticed a persisting issue involving the censorship of their voices in the media. The most prevalent example is Kidz Bop’s disgraceful rendition of openly gay artist Lil Nas X’s revolutionary song “Montero (Call Me By Your Name).”

Kidz Bop, an organization that makes family-friendly parodies of today’s top hits, attempted to make the song “Montero” more “appropriate” by eradicating all queer references. As the lyrics make it extremely clear the song is sung by a gay man, Kidz Bop removed and replaced all language implying a queer relationship.

For example, the word “boy” is striked from the line, “You live in the dark, boy, I cannot pretend.”

This conveys to young listeners that a man singing romantically about another man is taboo and should not be accepted openly in society. By eliminating gendered language, Kidz Bop is actively aiming to erase Lil Nas X’s queerness in hopes of presenting him as a straight man to their listeners.

This is not the first time Kidz Bop has exemplified homophobic behaviors. Another prominent example is Lady Gaga’s single “Born This Way,” which encourages listeners to love themselves no matter what their sexual orientation may be. This song was deconstructed to disregard lyrics, such as “No matter gay, straight, or bi, lesbian, transgendered life, I’m on the right track baby…”

It is clear that Kidz Bop aims to teach children that any behavior that is not heteronormative is wrong and inappropriate. However, there are several other examples of the media attempting to suppress queer voices.

This censorship is displayed on TikTok as well. Having been noticed by several TikTok users, users have taken it upon themselves to post videos demonstrating that TikTok’s text-to-speech feature, in the voice of Disney’s Rocket the Raccoon, would not translate words like “gay,” “lesbian” or “queer” into speech. Instead, these words were censored and skipped over completely as if they were considered profane.

For many LGBTQ+ youth who may be struggling to come to terms with their sexuality, mainstream media can regard their identity as wrong or inappropriate. This is extremely detrimental to their health and causes them to develop feelings of internalized homophobia.

According to The Rainbow Project, internalized homophobia consists of feelings of low-self esteem developed by those “who have learned and been taught that heterosexuality is the norm and correct way to be.” This can cause individuals to suffer from mental distress including anxiety, depression and suicidal thoughts.

This phenomenon can also be observed on the platform YouTube, with the flagging and demonetization of videos containing LGBTQ+ related content.

A group of YouTube users who noticed this pattern conducted an experiment in which they posted various videos containing LGBTQ-friendly words to see how they fared.

The group tested 15,000 key words posted within Nerd City’s videos and concluded that YouTube automatically flagged videos that contained certain words in their titles, which included appropriate queer terms such as “gay” and “lesbian.”

In another study conducted on queer vocabulary, the researchers found that 33 percent of the videos they tested with queer terms in the titles were automatically demonetized.

These titles included “LGBT Tik Tok Compilation in Honor of Pride Month,” “Top 10 Lesbian Couples in Hollywood Who Got Married” and “Lesbian daughters with mom.”

For many struggling to find acceptance within their own communities, the media is a very important outlet for LGBTQ+ members to openly express themselves. By muting the voices of queer artists and influencers, we are teaching generations to come that they must censor who they really are in order to conform and fit in. Instead, we should emphasize and elevate these voices in order to give the LGBTQ+ community the positive recognition it deserves.