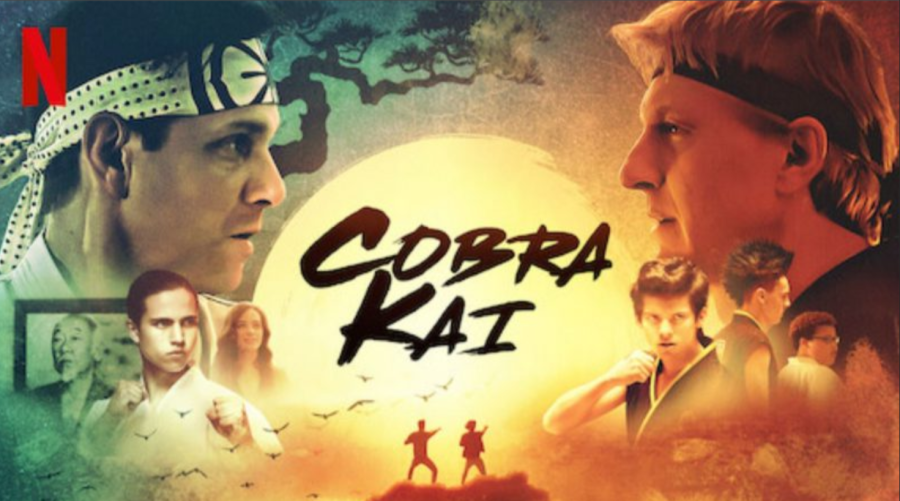 Season four of "Cobra Kai," based on events after the 1984 film “The Karate Kid,” aired on Netflix recently. The show became a massive success and tells the story of a rivalry between two dojos.

To kick off the new year, the fourth season of “Cobra Kai” was released on Friday, Dec. 31, 2021 on Netflix, a popular videostreaming service. This show is perfect for all ages, as it caters to people who have seen the “Karate Kid” movies as well as those who are new to the franchise.

This series is meant to reflect Johnny’s side of the story, showing why he was painted out to be the “villain” in the “Karate Kid” movies. Not only do we see Lawrence’s side to the story, but we see LaRusso’s side too. They both express how they feel about their “rivalry,” which remains the main plot throughout the seasons.

Season four is mainly about the dojos–Cobra Kai, Eagle Fang and Miyagi Do–getting ready to compete in the All Valley Karate Tournament.

This series is filled with flashbacks from prior “Karate Kid” movies, and even flashbacks that we haven’t seen before. For example, we see the memories of John Kreese, played by Martin Kove, when he was serving in the military, along with scenes from Lawrence’s childhood, which bring a sense of his broken home life.

This show is great at diving deeper into aspects of the characters that we have never seen in the previous “Karate Kid” movies. In season four, Lawrence reflects back on his life when his father was not around.

In this new season, we get introduced to several new characters that I believe will make an impact if there are upcoming seasons. These fresh new faces include Kenny, played by Dallas Dupree, Devon, played by Oona O’ Brien and Piper, played by Selah Austria, who each join a different dojo.

“Cobra Kai” is great with its parallels. For instance, Lawrence’s son Robby Keene, played by Tanner Buchanan, experiences the same situations that Johnny went through as a kid. In season four, LaRusso actually relates and compares himself to Miguel Diaz, played by Xolo Mariduena, by saying he’s used to his mom dating people that are not actually his dad. I see Miguel as the “Daniel LaRusso” of this show.

Throughout season four, we see LaRusso become more of a mentor to Diaz. This is the complete opposite from previous seasons, since we saw Lawrence as the mentor for him. One side of me thinks he’s only doing this because he is dating his daughter, but the other side of me thinks he is doing it because he genuinely cares about others, and mainly because Miguel reminds him of his younger self.

“Cobra Kai” has been great at building momentum throughout the series. They constantly leave each season on cliffhangers, which leaves the viewers begging for more. This season was especially left on a huge cliffhanger that will make you crave more.

I really enjoyed this season because there was never a dull moment in any of the scenes. The plot was executed well and the fight scenes looked authentic compared to prior seasons.

Season five has not been confirmed, but there is a likely chance that the show will be renewed.