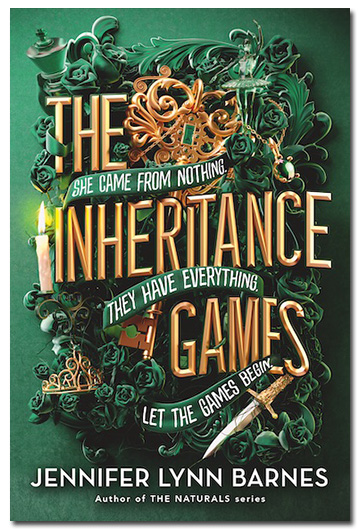 "The Inheritance Games" by Jennifer Lynn Barnes is a thrilling read full of romance, drama and secrets.

The trending book “The Inheritance Games,” published in 2020 by Jennifer Lynn Barnes, is a fast-paced read. After seeing the book numerous times on TikTok, its intricately designed cover and unique description drew me in. In the span of just 384 pages, Barnes takes readers down a layered path filled with romance, drama and secrets surrounding the Hawthorne inheritance of billions of dollars.

The plot of this story felt similar to a combination of the “Knives Out” movie and a simple Cinderella “rags-to-riches” theme. The chapters of this book were not lengthy, but were still able to keep me easily engaged to get to the bottom of each riddle, code and clue.

In the first chapters of the book, we are introduced to the main character–Avery Grambs, a recently orphaned high school student who lives in her car. Despite her circumstances, Avery strives to earn a scholarship, graduate high school and become less dependent on her half-sister Libby, which demonstrates her strong-willed character.

However, these aspirations soon become irrelevant after Avery is summoned to the Hawthorne residence for the reading of billionaire Tobias Hawthorne’s will.

Due to the persistent urging of Grayson Hawthorne, the grandson of Tobias Hawthorne, Avery attends the reading of the will at the Hawthrone Mansion despite the fact that she has no recollection of ever meeting him. At this event, it is revealed that most of his inheritance will go to Avery. This leaves almost nothing for Grayson and his three brothers–Nash, Jameson and Xander, who were expected to be the heirs.

For Avery, being the heir of the Hawthorne inheritance comes with one stipulation that was created by Tobias before his death: the requirement to live in the mansion for at least a year and to not kick any member of the Hawthorne family out. Almost overnight, Avery is whisked into the world of the rich and famous and is assigned a personal lawyer and bodyguard.

Her relationship with each of the brothers is a key part of the story. They disclose anecdotes about how their grandfather was obsessed with puzzles and how he shared that obsession with them while they were children through competitions. As readers delve into the suspicious circumstances surrounding Avery’s sudden inheritance, secrets are revealed about their family dynamic.

To begin with, each of Tobias Hawthorne’s four grandsons have distinct personality types. Starting with Nash, he is the oldest and protective brother that never wanted anything to do with his grandfather’s money. On the other hand, Grayson appears to be the original heir and is convinced Avery has somehow conned her way into the family.

Additionally, Jameson and Xander view Avery as the last puzzle their grandfather left them. The tense brotherhood between Grayson and Jameson intrigued me since it was apparent that there was an underlying conflict between them that was being expressed through their opposing views on Avery.

As the story progresses, Avery and the brothers find clues in the will, leading them down secret passages and dangerous situations, especially when Avery narrowly misses an arrow aimed at her. The adventures spark a budding romance between Jameson and Avery, but it quickly dissolves as Jameson continues to obsess over the clues his grandfather left.

During this time, Avery becomes more involved in the Hawthorne family, all the while still feeling like an outsider. Internally, she struggles with grasping on to her new life which seems to have more downfalls than perks.

The climax occurs towards the end of this book in a dramatic way. Tobias Hawthorne’s last clue opens the door to the next addition in this trilogy, “The Hawthorne Legacy.”

Overall, “The Inheritance Games” felt like a giant game of Clue and as a reader, I was determined to solve this mystery along with the characters. As one secret was revealed, there seemed to be 10 more that would appear, and the cliffhanger left me wanting more.