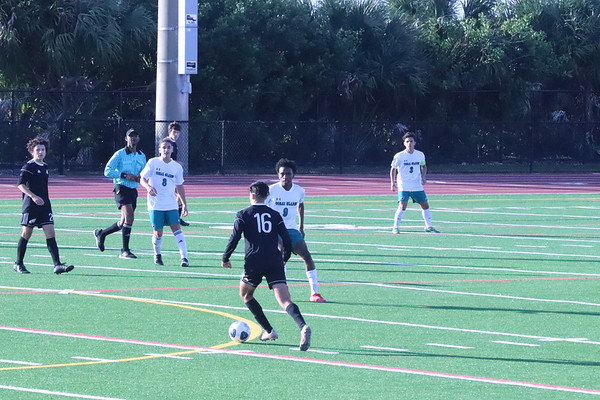 Midfielder Tomer Yair (16) takes the ball upfield against the opposing Coral Glades defense. The Eagles went on to lose in a penalty kickoff by a score of 4-3.

On Wednesday, Jan. 12, the Marjory Stoneman Douglas men’s varsity soccer Eagles took on the Coral Glades Jaguars in a district match that would give the Eagles their fifth consecutive victory.

With eight days of rest prior to the game against Coral Glades, the Eagles were in strong shape for what would be an important week of games.

After the kickoff at 7 p.m, there was a clear lack of in-game repetitions as MSD had only played one game in the past month. The Eagles were playing at a slower pace than usual and made several mistakes with the ball at the start.

The Eagles were eventually able to push past the slow start and create chances against a strong Coral Glades defense. 15 minutes in, forward Mauricio Jimenez (11) received a pass and was able to score a header into the bottom corner, giving the Eagles a 1-0 lead. Jimenez gave an all-out performance for MSD, being present on both offense and defense for his team.

“I was just trying to give my teammates energy and telling them to keep their heads up after a mistake,” Jimenez said.

Once the first goal was found, MSD maintained a steady control of the ball for the rest of the first half. The Jaguars struggled to string together an attack due to an impressive defensive display by the Eagles.

At the end of the first half, midfielder Danny Gaviria (6) got on the end of a corner kick and scored from a difficult angle to increase the Eagles lead to 2-0.

The second half changed very little, as the Eagles maintained their comfortable lead and rarely had to face a shot from the opposition. The final whistle confirmed a 2-0 victory for MSD, a fifth-consecutive win going into the Eagles’ toughest challenge of the season.

Going in with a record of 7-1, the Eagles felt prepared for the difficulty of a game against St. Thomas Aquinas Raiders. The Raiders went into the game with a record of 11 wins, four losses and three draws.

“We know that St. Thomas is a big rival, they’re a really good private school and we hope that we can go there and beat them,” Gaviria said prior to the game.

Traveling to St. Thomas for the game on Friday, Jan. 14, the Eagles sought to extend their winning streak to six games and beat a team who had gotten the better of MSD in previous years.

Having a difficult time defending the talented Raiders team, the Eagles lost their goalkeeper Bruno de Falco (1) to a red card early on and were never able to recover.

St. Thomas eventually led by a score of 2-0 and were able to control the Eagles’ attackers throughout the second half. By the end, MSD had lost by a score of 2-1 and saw the end of their winning run.

The Eagles come back home with a 7-2 record, preparing to face Cooper City on Tuesday, Jan. 18 at 7 p.m.