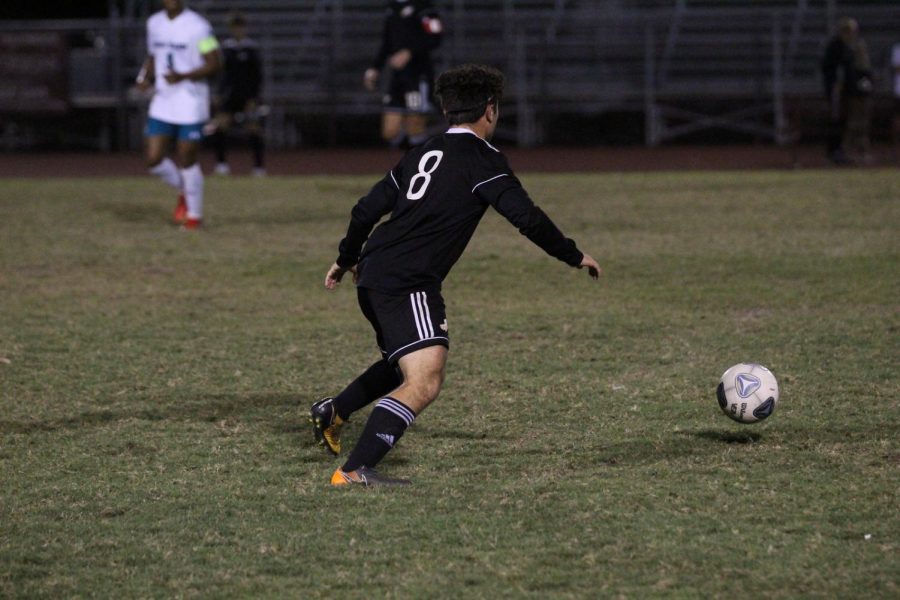 MSD midfielder Robbie Alhadeff (8) settles the ball before making a pass. Alhadeff assisted in a goal for the Eagles' 2-0 victory over Coral Glades.

On Wednesday, Jan. 19, the Marjory Stoneman Douglas High School’s men’s varsity soccer team played the Park Vista High School Cobras. Their last game of the season came off of a 2-1 win over Cooper City High School on Tuesday, Jan. 18. This game would be their second straight win.

Kickoff was at 7 p.m., and the boys were prepared and ready to play. They knew it would be a tough game as they played just the day before and may have been slightly fatigued. This would be the last game of their regular season.

The Eagles started off with the ball and began passing very well, ultimately leading to great chemistry throughout the game.
The ball got back to the MSD goalie, who kicked it up the right side. A right forward player dribbled far down the sideline but eventually lost the ball.

The Cobras had an amazing throw in and had their first possession of the game as they were very aggressive and attacked quickly. However, they were too aggressive as they took a very far shot.

“We felt we forced them to take longer shots because they could not get in the box as our defense was stellar,” defender Robbie Alhadeff (8) said.

The game was very neutral the whole game as both teams had around three shots within the first 15 minutes of the game. Moreover, forward Geordan Yuan (9) was playing a great game as he was making good passes. He is only one of several great leaders of the team.
“Having Robbie on the team for advice and someone to go to is great as I develop my game,” midfielder Coby Alhadeff (31) said.

Going into the first half, the score was 0-0. The game was expected to be a great soccer game, especially since both teams were skillful and experienced.

The first five minutes of the second half led to the Cobras scoring a goal, which was a shot in the left corner of the goal almost impossible to block.

The score was 1-0 and MSD was still in the game, just down by one. With better teamwork, the MSD team could push themselves to win. MSD made a hard push and took a great shot, but missed as they ran back on defense.

The Eagles again made a goal when Yuan took a shot and scored. He ran back and celebrated with his teamates as the score was tied at one.

The last ten minutes of the game consisted of a lot of hard fought defensive stops, and the game ended in a tie with a score of 1-1.

The MSD Eagles will head into the playoffs from now on out, rested and ready to play. The date of their first playoff game is yet to be determined.