Marvel plans releases for new shows and movies in 2022 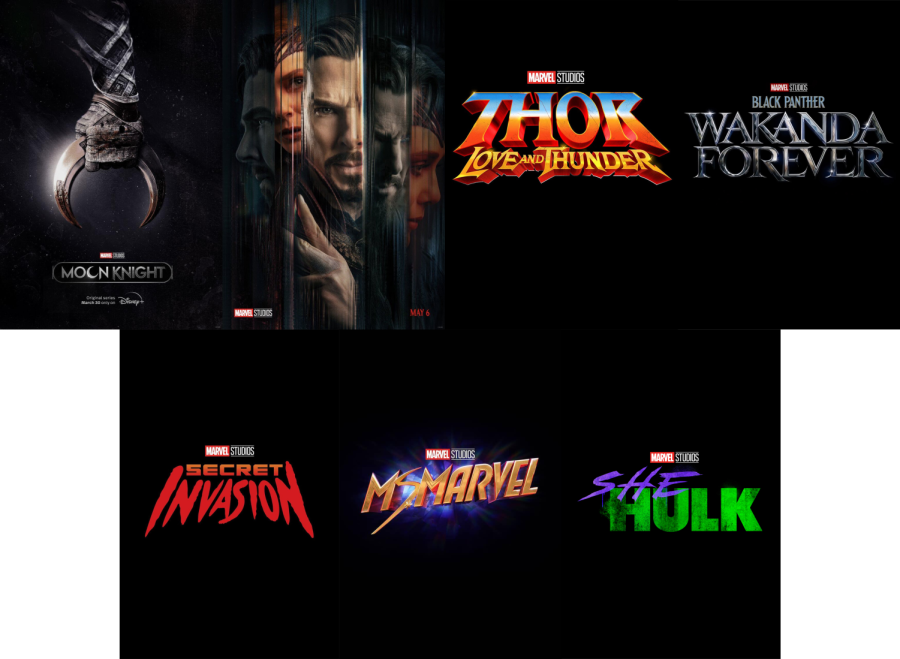 Marvel Movies. Marvel announced new shows and movies, along with their posters.

2022 is going to be filled with lots of miniseries and television shows for Marvel fans new and old, featuring over three new television shows, and four new movies, this year will be an exciting year for all fans.

“Moon Knight” will premiere on March 30. The trailer was released on Jan. 17. The show is expected to release on March 30 and will have about six episodes, with one coming out each week.

Moon Knight will be played by Oscar Isaac, who has appeared in past movies like “Dune,” “Spider-Man: Into the Spider-Verse,” “The Card Counter” and a few “Star Wars” films. This show will be based around the Moon Knight comics written by Doug Moench and illustrated by Don Perlin. Moon Knight is known as the soldier of fortune and can be seen as a guest in several Spider-Man comics. The first trailer features one of rapper Kid Cudi’s most famous songs, “Day N’ Nite,” and is expected to become a very popular show upon release.

Up next is “Ms. Marvel,” which had its exclusive first look uploaded to YouTube on Nov. 12. The miniseries is going to be the first Marvel show featuring this iconic Marvel Cinematic Universe comic book character. Ms. Marvel is a comic book character who got her powers at a younger age and learned to live with them. This show is yet to receive a release date, but it is expected to come out in mid-2022 with approximately six episodes. Playing Ms. Marvel, or Kamala Khan, is actress Iman Vellani.

Another show fans are expecting is none other than “She-Hulk,” which is suspected to be one of Marvel’s best 2022 shows. Although the release date is unknown, much like most of the other shows, it is most likely to be released in mid-2022. Fans will see Mark Ruffalo continue his role as the Hulk and act as a mentor to the main character, Jennifer Walters. Playing this role is Tatiana Maslany who also appears in past shows like “Orphan Black” and movies like “The Vow.” This show is going to have a total of 10 episodes.

Additionally, actor Samuel L. Jackson is returning to the MCU since “Avengers: Endgame” in his new show “Secret Invasion.” This show will center around Jackson’s character, Nick Fury, and his past role in the movie “Captain Marvel.” This show will likely go into deep detail about who the Skrulls, aliens who fought alongside Fury, were. It is unknown if Captain Marvel herself, played by Brie Larson, will make an appearance. The release date has not been revealed yet. but this show is suspected to be released around late 2022 with about 6 episodes.

Three Marvel movies will be released in 2022: “Doctor Strange in the Multiverse of Madness,” releasing on May 6, “Thor: Love and Thunder,” releasing on July 8 and “Black Panther: Wakanda Forever” releasing on Nov. 11.

“Doctor Strange in the Multiverse of Madness” was first teased greatly during Marvel’s “WandaVision.” It showed lots of hints as to how Wanda Maximoff (Elizabeth Olsen) will be joining forces with Doctor Stephen Strange (Benedict Cumberbatch) to explore the multiverse and defeat whatever faces them.

With the last Thor movie being released a few years ago, Thor is making a return with “Thor: Love and Thunder.” Thor was last seen in “Avengers: Endgame,” and there is speculation that Dr. Jane Foster, last seen in “Thor: A Dark World,” will be able to wield godly power and hold Mjolnir (Thor’s hammer) herself. Christian Bale will be the villain in this movie playing Gorr the God Butcher, and it will be directed by Taika Waititi who also directed the past movie “Thor Ragnarok.”

Lastly, “Black Panther: Wakanda Forever,” will bring the world of Wakanda back to the theaters with a new Black Panther. After Chadwick Boseman’s passing, there is the possibility of Marvel deciding to bring King T’Challa’s sister, Shuri, onto the throne as the new Black Panther.

These movies are going to take place post-“Spider-Man: No-Way Home” and are expected to be a great addition to the MCU.

This year is going to be one of the biggest years for not just Marvel, but also for the fans that are planning to watch these shows. Fans are excited to see such a large release of combined movies and shows in just one year as more content expands the MCU.