[Opinion] Three of the best podcasts to listen to 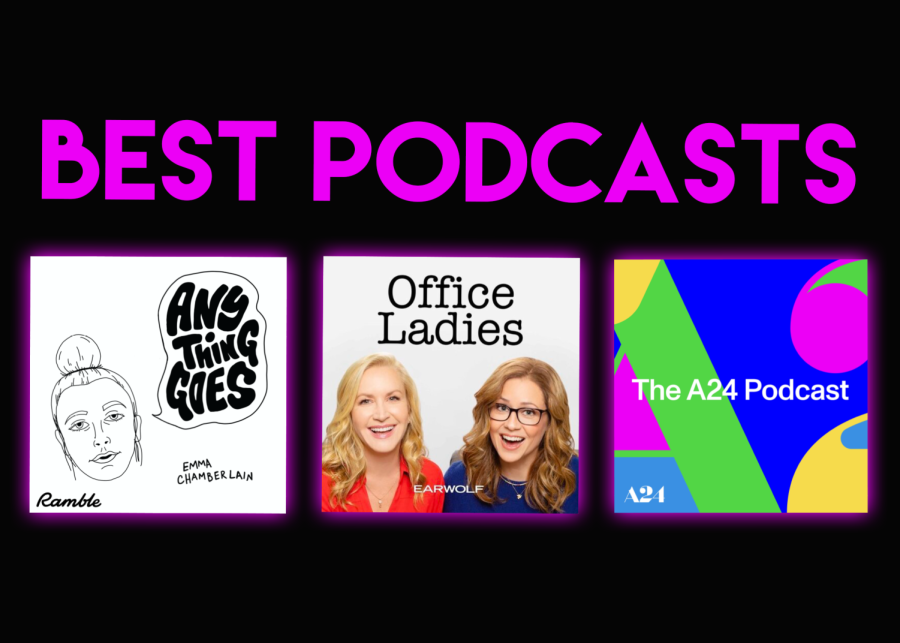 Podcasts are an effective way to consume media in busy schedules.

Whether it be working out or driving to school, podcasts are a great way to keep the mind busy and entertained. Podcasts are audio recordings in the form of episodes where a person, or multiple people, talk about any topic. They typically pertain to a certain area of interest, like crime or comedy. However, some consist of someone rambling about their inner thoughts.

Over the last decade, the art of podcasting has risen in popularity and became a mainstream listening platform as an expressive outlet. While many individuals resort to television as their main source of entertainment, there are an unlimited amount of topics to explore through podcasting.

As someone with a short attention span and a very specific taste in entertainment options, here are the top three podcasts to listen to that had me hooked in the first 30 minutes and impatiently waiting for the next episode.

“Anything Goes” with Emma Chamberlain

Emma Chamberlain, an internet sensation that emerged on YouTube, hosts the trending podcast “Anything Goes.” The baseline of her episodes is literally, “Anything goes,” as she talks directly to her listeners about anything on her mind. She often reflects on past relationships and Los Angeles celebrity experiences, and gives advice to people who ask her questions.

In my favorite episode, titled “Why do I hate myself?,” Chamberlain talks about self-hatred and how it affects the people around her. She advises her audience, especially those who relate to this issue, to turn off their negative thoughts and reflect on the positive aspects of their lives.

“It’s not charming to be around someone who self-deprecates all the time,” Chamberlain said in the podcast. “You are more fun to be around when you feel good about yourself.”

I could listen to her podcast for hours on end. Aside from being a generous and kind person, Chamberlain is extremely funny and entertaining. During more serious discussions that resemble a therapy session, she will let out a small joke or even a burp to help break the tension and make her listeners laugh.

The extremely raw and intimate episodes make me feel as though Chamberlain is speaking to my feelings directly. By expressing her emotions in such a vulnerable, and sometimes funny, manner, she provides a comfortable and safe environment for her listeners. By delivering her thoughts in a relatable way for young adult listeners, the audience is able to effectively feel connected with Chamberlain.

A24 is an American entertainment company that produces films and television shows. For instance, they are associated with the Academy Award-winning movie “Moonlight” and the Gen Z top-rated show “Euphoria.” Dipping into the world of podcasting, their unique episodes do not have hosts. Instead, every episode has two public figures that discuss anything on their minds. There are no rules for what the two part-time hosts can talk about. With different people every episode, like actors and musicians, the variety of topics are endless.

In the newest episode, which is my current favorite, worldwide popstar Lorde and “Euphoria” star Hunter Schafer cover the topics of star signs, transgender portrayal in television and personal boundaries in work. They also address how the pandemic affected their writing in television and music. Through the soft-spoken exchange of views and giggles, Lorde and Schafer go through their experiences and give listeners a chance to learn more about their backgrounds.

The freestyle structure of “The A24 Podcast” makes each episode more intriguing than a podcast with a set topic. Two people with different lives and interests make the podcast unpredictable in the sense that a listener will have no idea what they are listening to until they press play.

Angela Kinsey and Jenna Fisher, former co-stars of the highly rated sitcom show “The Office,” host a podcast called “Office Ladies.” They rewatch and break down each episode of “The Office,” revealing behind-the-scenes information on the production.

Kinsey and Fisher share their experiences from filming, like hilarious stories about themselves, the cast and the writers, along with messages from former cast members who sometimes join the podcast to recount their favorite memories.

One of the most beloved and brilliantly funny episodes from “The Office,” titled “Dinner Party,” had a special podcast episode where Kinsey and Fisher included audio clips from writers, producers and actors who shared hidden details. They revealed that Kinsey was extremely pregnant when taping the episode and, if you look closely, you can see her cover her stomach with strange objects throughout the episode.

Kinsey and Fisher reminisce on their hit show in an engaging, informative and funny manner. The lighthearted show is great for “The Office” fans, like myself, to learn more about the show and their favorite moments throughout the nine seasons.

Although there are countless podcasts to stream on Spotify and Apple Podcasts, “Anything Goes,” “The A24 Podcast” and “Office Ladies” are, without a doubt, the best ones. Great for all ages, these three podcasts will immediately put a smile on your face and possibly a couple tears. I recommend the three podcasts listed to any individual looking for a way to occupy their minds with someone else’s thoughts.