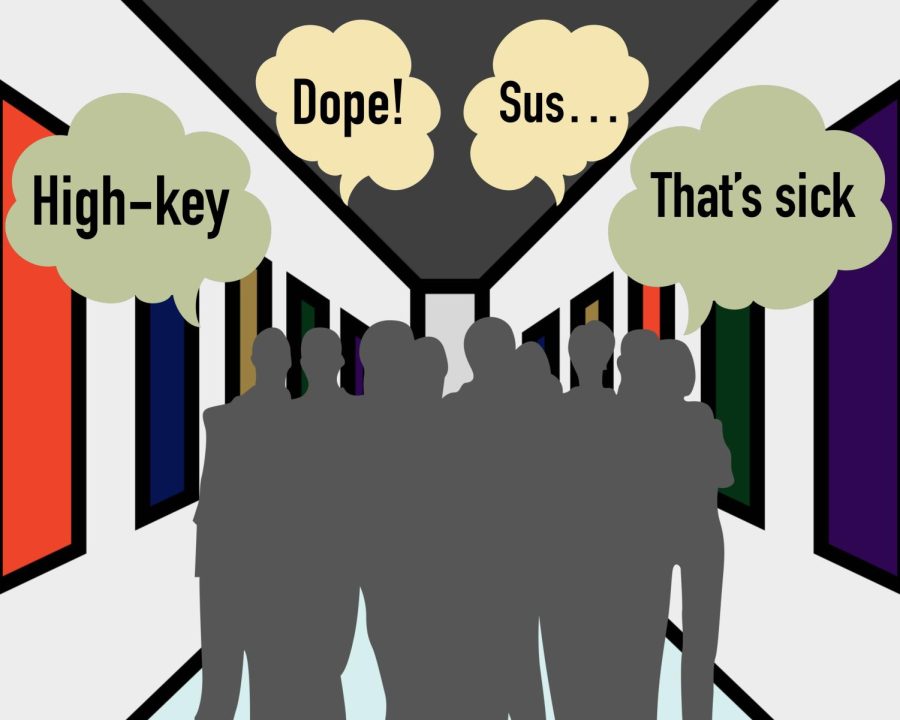 Students continue to use slang terms in their everyday lives, which can be potentially fatal in their future activities.

Boomers, Gen X and Millennials grew up in a different time where technology was not the main talk, nor as advanced as it is today. Having unlimited access to the internet or having the ability to communicate with others by a click of a button are luxuries the newest generation have that older generations did not. This realization seems to create miscommunications between the two groups when talking about modern trends.

Modern-day slang is often interpreted as words that should only be used in an informal setting because they are not all considered “official” words in the dictionary.

Students don’t usually think twice when messaging one of their friends using slang words such as “dope,” “sick,” “GOAT,” “high-key” and “sus,” but in reality, the improper verbiage could lead to larger problems in the future or even in the present when emailing a teacher.

Due to the fact that older generations did not grow up with slang, many refer to slang as rude and demeaning because they do not understand its usage. When applying to jobs, if someone uses an unfamiliar or unproper word in their interview or application, the employer may think of them as unprofessional for not using proper vocabulary.

The main reason why many individuals from earlier generations aren’t aware of slang is because most of it is produced on social media platforms, specifically the app TikTok, which is mostly catered to teenagers.

The TikTok app is responsible for the spread of most of the slang we hear today, like “POV,” which means point of view, “heather,” which refers to a person who is idolized and “no cap,” which means true or not a lie. In addition, “W” represents a win and “cheugy” represents lifestyle trends from the early 2000s. These words create confusion between younger and older individuals.

Older generations see these words as inappropriate because they are not standard vocabulary words students should be practicing. Additionally, new slang words often trend on the internet.

With teenagers spending so much time on various social media platforms, the use of slang words has become a habit and sooner rather than later, they will become standard words or expressions in their everyday speech.

Slang sets students up for failure because it creates an unprofessional perception of them, especially when they are looking for a job in the future. It would be improper if, for example, a student becomes a lawyer who goes to defend a client in court using a word like “dope” when talking since it sounds impolite and informal.

Students need to start becoming more aware of their slang habits because if they include certain words in their vocabulary too frequently, it can become a habit that could be extremely harmful in the future.