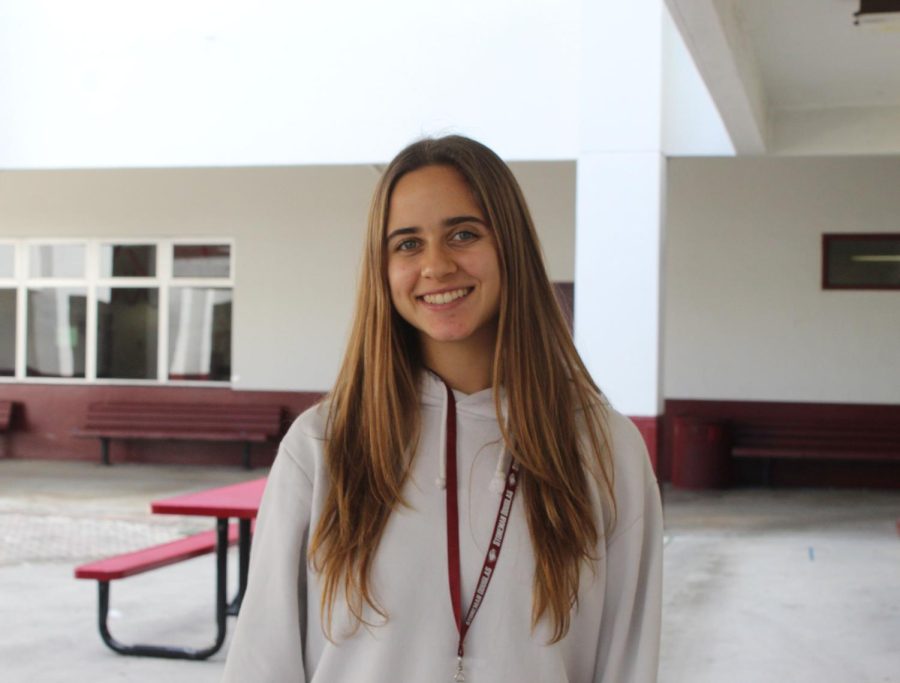 Michellle Berndt is a senior at MSD. She recently committed to John Hopkins University on a four-year Army ROTC scholarship and is an avid soccer player.

Senior Michelle Berndt is an outside back and defensive center mid for Florida United and the U20 Puerto Rican soccer teams. She was born in Everett, Washington, and moved to Coral Springs, Florida at the age of 4.

In her early years, Berndt tried out dance, cheerleading and gymnastics, but at age 6 she began playing soccer.

“I found those boring, tried out soccer and fell in love with the sport,” Berndt said.

Berndt was devoted to her sport. When she first began playing, Berndt competed against boys and girls and even matched-up against older kids. Later on, Berndt played for FC Florida for two years, which is a National Premier League team, and was able to showcase her talent on a national level. She then moved to Florida United and played well enough to earn herself multiple scholarships.

Berndt recently committed to John Hopkins University on a four-year Army ROTC
scholarship and is playing soccer for the school. Berndt considers this her greatest accomplishment, being that all the work she put into the classroom and on the field paid off.

“I am beyond blessed to be able to play the sport I love for one of the best schools in the country,” Berndt said.

When Berndt was younger, she admired women olympic soccer players like Alex Morgan and Julie Ertz. As Berndt got older, she put their skillset into her own.

“I try to motivate myself and make myself better everyday,” Berndt said.

Additionally, Berndt has many influential people that directly interact and inspire her every day. She sees her parents as role models and looks up to them. According to Berndt, her parents taught her everything she knows and the mindset that is needed to be great.

“My father has always told me to work hard now and have fun later, so I grew up with that mentality,” Berndt said.

When Berndt is not playing soccer, she is doing homework or participating in many clubs.

“I participate in several extracurriculars and clubs since I love being involved with my school and community,” Berndt said.

Moreover, Berndt is a member of Mu Alpha Theta, volunteers for Lights4Hope and is a part of a nationwide organization called the MyVote Project.

When Berndt isn’t helping in the community or on the field, she is working out or taking up hobbies like art or playing an instrument.

“In my freetime I enjoy art, guitar, cooking, biking and going to the gym,” Berndt said.

Berndt is not only great on the soccer field, but also a great help in the community, as she helps in countless projects to help make her community better.