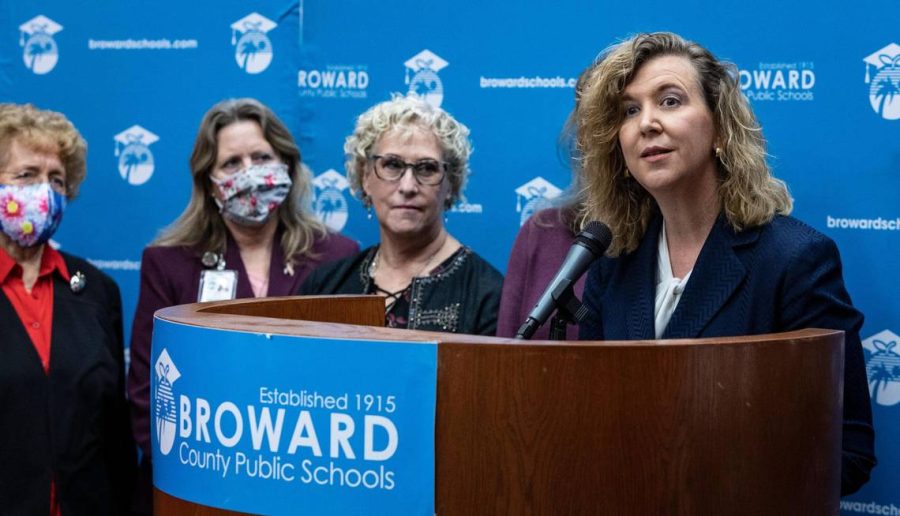 Cartwright was chosen to be an interim superintendent over the 2021 summer after former superintendent Robert Runcie’s departure. Speaking to board members during a public interview on Wednesday Feb. 9. Cartwright said she’s proven herself in her six months on the job, but she also hopes to be more effective in the permanent role.

She has been married to Dr. Carl Cartwright for 30 years and has a son, Dylan, who recently graduated from college, according to her school board biography.

Cartwright has been an educator all her life, serving as classroom music teacher, an associate superintendent and a superintendent of Oshkosh Area Schools, a smaller school district, in Wisconsin from 2018 until mid-2021.

Cartwright has also worked in Orlando County Public Schools in Florida for 17 years, last serving as Associate Superintendent for Exceptional Students Education, where she oversaw the department with responsibilities for supporting students and leading principals, office administrators, instructional personnel and classified staff.

Cartwright and Michael Gaal were the two candidates the board was considering for the top position.

Gaal is a former Air Force flight instructor who has been an administrator in Washington, D.C., public schools as a Deputy Chancellor, Innovation and Systems Improvement for the District of Columbia Public Schools. He also worked as a chief of staff for Oakland Unified School District and Network Leader and operating chief officer for the (K-8) Education Achievement Authority of Michigan.
The school board voted 8 to 1 in favor of Cartwright to take the role as superintendent on Wednesday Feb. 9. Board member Lori Alhadeff was the single board member who did not vote in favor of Cartwright. During the meeting Alhadeff said she felt Gaal could fix deep problems within the district.

Dropping the interim title she has held for several months, Cartwright is now the first female to be appointed as superintedent to Broward Couty Public Schools. Terms are still being reached regarding Cartwright’s contract about the length of her term as well as her salary.

“As a student and resident of BCPS, I am very happy to finally see a woman take over the superintendent position and I’m even more happy to see that the position was overtaken by Vickie Cartwright,” junior Alexandra Senior said.

As superintendent, Cartwright said her first order of business will be to fill key leadership positions that have been open for a while, since she wasn’t able to do so as the interim schools chief.

“One of my initial interests at this point is really going out and recruiting the best-qualified candidates for those positions,” Cartwright said to local 10 news during a press conference after the vote. “The role of a superintendent is one where you want to know that you have somebody who will be successful in that role, you also want to know that you have someone in that role that will lead the district in a positive direction and a unifying direction and always keep students as their primary focus.”

Vickie also says she will focus on counteracting the negative impacts the COVID-19 pandemic has had on students and teachers, including dealing with the emotional side of the two-year turmoil.

“Vickie Cartwright seems to be a good fit for the superintendent position and I think it’s a good idea to try and fill the important leadership jobs because there is a teacher shortage everywhere,” World history and economics teacher Sofia Capezza said.

The Broward Teachers Union has supported Cartwright’s candidature since she announced her intention to pursue the permanent position. During her six-month term, serving as interim superintendent, she has proven to be an intelligent and excellent leader with an ability to listen to and work with all constituencies.