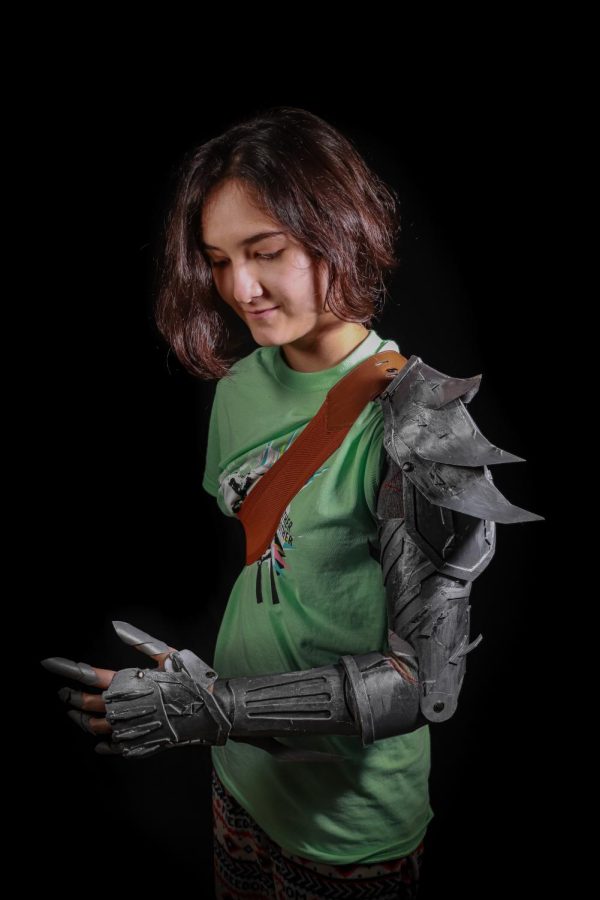 Suiting Up. Senior Angela Guiso models a prop arm from the anime “Fullmetal Alchemist.“ To make it, she molded it to the shape of her arm and attached craft foam on top.

Sealing, sewing, woodwork, painting and sculpting are some of the skills adults struggle to acquire. However, these are only some of the many skills senior Angela Guiso possesses. She assembles costumes as a hobby or when she gets stressed with school.

Guiso has created fantasy costumes and accessories, such as dragon masks, angels, bird wings and swords. She has also made a mechanical automail arm from the anime series “Fullmetal Alchemist.”

“The process of figuring out how to bring a concept from a piece of media into reality makes the whole experience more tangible and immersive,” Guiso said.

Guiso has acquired multiple hobbies over the years, like drawing, reading, writing, playing piano, sculpting clay and painting. The scale and quality of her projects grew as her skills improved, so making costumes was a natural escalation from where she started.

Her interest in costume-making began roughly six years ago, where she assembled a life-size pair of articulated wings. Guiso’s projects emerge when she feels inspired, usually from whatever fandom she has interest in at any given moment.

When Guiso was younger, she struggled with low self-esteem. Her first big project was life-size, wearable and movable bird wings to prove to herself that she had valuable traits. The wings were inspired by a web comic called “Homestuck,” an internet fiction series created by American author and artist Andrew Hussie. This project motivated Guiso to continue making costumes, slowly improving them as her skills grew.

Guiso uses costume making as a stress reliever when she is feeling tired or overwhelmed. When she begins to experience exhaustion from studying she reverts to crafting to take a break.

“I live life to accomplish my goals and work hard, so both school and my personal projects exist for this purpose,” Guiso stated. “I live to create.”

Even though Guiso engages herself into costume making, she does not sell them. She has expressed that she will never make art professionally or put them up for sale.

“I put a lot of my soul into my projects, so putting a material value on them to sell would strip me of this act of loving self-indulgence,” Guiso said.

To make costumes, Guiso first chooses a reasonable concept and searches up others’ attempts at the project in the past. Then, she drafts the idea on paper to better conceptualize it, tweaks her plan of action and prepares for any issues that may arise. Once Guiso chooses and acquires the materials she needs, she gets right to making the costume and responding to the various challenges that arise.

Guiso has also developed many skills on the fly, such as sealing, woodworking, sewing and general engineering. These skills are very important for the art of costume making so she has progressed in her skill set.

Even though Guiso enjoys costume-making, there are still many struggles that come with it. Part of the challenge is balancing price, beauty and practicality in her creations. She uses materials from around her house, like used clothes, paints, clay, plastic scraps and cardboard containers as it’s cheaper and more sustainable. However, if needed, Guiso purchases materials from stores.

Guiso aspires to create costumes incorporate Thai culture as she is half-Thai and half-Italian. She appreciates her heritage and engages in celebrating its cultural components on a daily basis.

“Since my home is my cultural touchstone, it is the hearth to my traditions,” Guiso said.

At her house, her mother speaks Thai, cooks Thai food and practices the religion of Buddhism, which is predominant in Thailand. She has also traveled to Thailand and visited many Buddhist temples.

Thailand is known for its diverse foods, martial arts and selection of temples. However, Guiso believes that the culture is not portrayed and talked about in American media. She feels alienated because she feels other Asian cultures have a greater representation in American society.

She hopes to change this view of individuals in the future and teach them about her unique culture and identity.

Although Guiso loves costume-making, she does not plan to make it a career option in the future. Rather, she plans on becoming a biomedical engineer when she is older and have her costume-making remain a hobby. She is working to incorporate her various interests and skills into researching and creating medical technology. She is hoping to change the world with whatever she does.