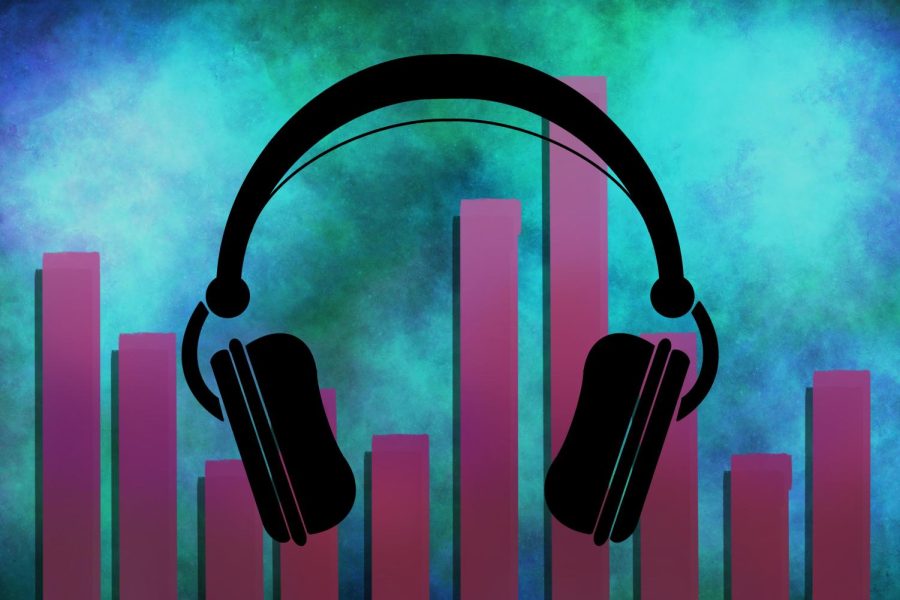 The beats and rhythm of music are becoming more popular than the lyrics of songs in the new generation. Illustration by Madison Lenard

When turning on one’s playlist, you are most likely to find all music with fast uplifting beats rather than slower music that tells a story. Many artists use songwriting as a form of journaling about something significant within their lives.

Numerous singers like Taylor Swift, Adele, Ariana Grande, Justin Bieber and others tell stories in their songs. A lot of artists tend to write about break-ups, losing a loved one or just overall hard times in their life because it comes from deep emotions.

Sometimes people even joke that if an artist is going through a break-up they are going to release a very good album soon because they have time to examine new rising emotions.

For example, Taylor Swift wrote the song “All Too Well” to describe her feelings during the hard breakup with Jake Gyllenhaal because that relationship took a piece of her youth since she was very young when they dated. Obviously this break-up caused deep emotions to rise which is why so many people ended up loving the song. Swift was able to really express her emotions and some say that it’s almost like you can feel what she went through just by the lyrics.

But today all you hear when you turn the radio on is songs that have not much meaning because people in today’s new generation only care about the beat of the music. There are many faster or uplifting songs that tell a story, but slower songs are able to break down a singer’s feelings more clearly.

Artists who take time to explore deep emotions while writing music usually get underappreciated. Most of the time they end up making the beats slower and then people think that slow music puts them in a sad mood but that’s not really the case if you just listen closely to what the song is really saying. A song may be slower with a down vibe to it, but that song could be about overcoming a hard challenge in life or getting to love a certain person which are all sweet and good things.

A musician having to process and put feelings down on a piece of paper to make a song can be an emotional experience for them though, especially if they do a live performance of it. It may even make them feel as if they are going through it again, but this can also help people who may be dealing with similar things because they have the ability to relate their feelings to someone else’s just by putting on a song, this is why it’s important to not just rely on the beat of a song to judge it.

Another thing that artists sometimes do is make up stories about fictional characters. It can feel as if you are reading a story just without a book in this case, which is why paying more attention to the lyrics of a song than just the beats can take your mind to different places.

Overall, society should just listen to lyrics of a song more because it can be a very interesting experience rather than just judging a song based on how fast paced the beats are which does not accurately portray the real art of the song.