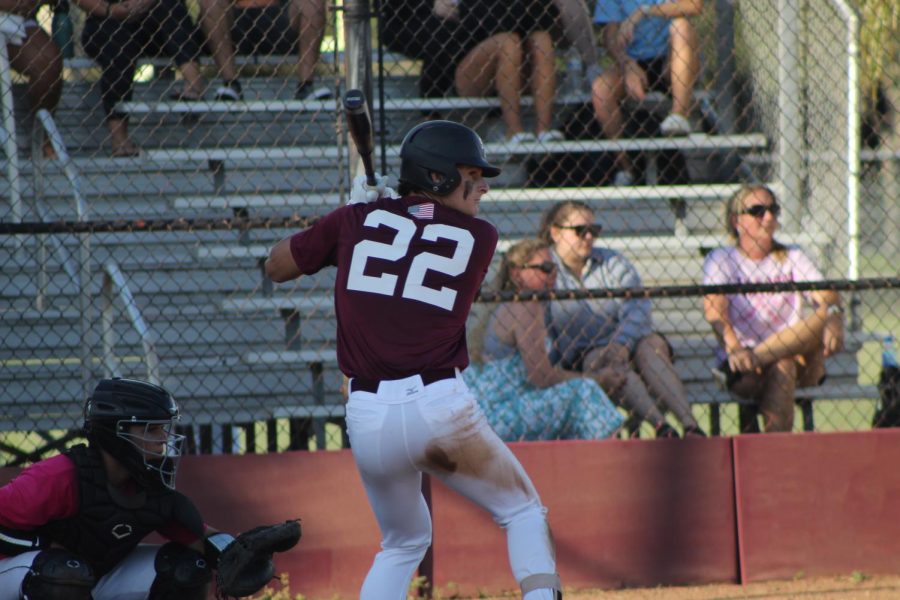 Outfielder Roman Anthony (22) prepares to strike a ball at a home game.

On Thursday, Feb. 17, the MSD men’s varsity baseball team stole a late win in their game against the Doral Academy Firebirds.

“We felt good going into the game and confident,” pitcher Chris Arroyo (23) said.

The game started out slow, with both teams striking out to end the inning. In the second inning, both teams’ offenses started to make an impact; it started with a lead off double by Doral.

After two outs, the Firebirds’ offense came through to score a run off of an RBI, or “run batted in,” single. The Eagles finally put the Firebirds away with a strikeout.

With the Eagles up to bat, the team came up strong and drove in a run off of a couple of singles. They then had their momentum stop at a halt with two pop outs to end the inning 1-1.

The third inning went by quickly as Doral Academy scored a quick run and then struck out to end the inning for them. The Eagles still tried to push their inning to score a run, but the Doral defense kept them scoreless.

The fourth inning began with the Doral offense pushing to score in the inning, but they once again struck out early.

The sixth inning began with the Firebirds starting out slow with two straight outs. They got a single but it did not matter as the next batter struck out. Then came the Eagles, down 2-1 with only 6 outs until the game was over for them. Outfielder Grant McDonald (8) hit one into foul territory, but a Doral infielder ran it down for the first out.

Next, infielder/outfielder Alex Lazar (2) stepped up to the plate and hit a single. After that. he stole a base, leading to a runner on second with only one out.

“I just feel like we came up clutch and we played well late in the game when we needed to,” infielder Eric Torres (5) said.

On the first pitch of the next at bat, the batter hit an RBI double to tie the game at two. The Eagles could not do anything in the inning after the run, as the next two batters stuck out.

Doral started the seventh and final inning strong, hitting a single, but MSD came back determined to win. The Eagles seized momentum and struck out the side, as they went into the bottom of the seventh with renewed energy. They flew out and then caught fire as they hit two singles to get a runner in scoring position to end the game.

Shortstop and second baseman Devin Fitz-Gerald (1) hit a double to end the game as the Eagles came back to win on a walkoff.