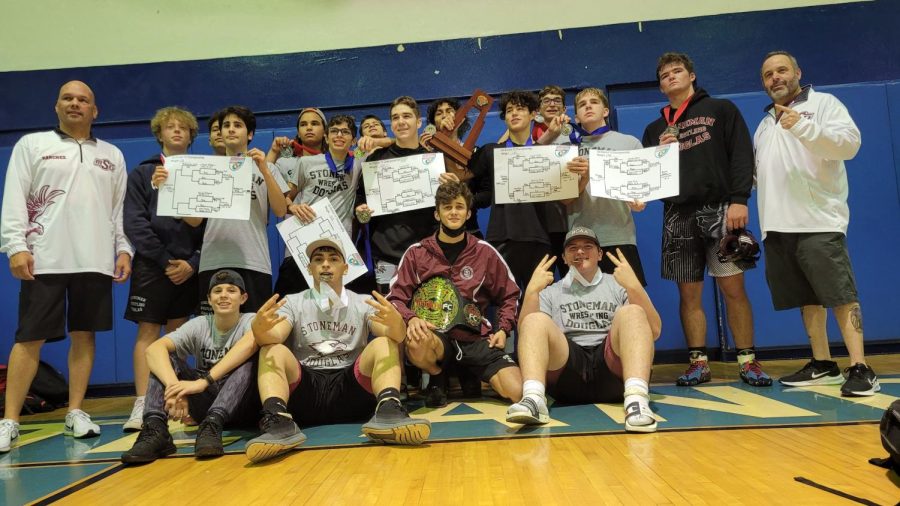 After their win in the district tournament, the MSD wrestling team gathers with their winning brackets and medals to celebrate the victory.

To prepare for the tournament, the Eagles conducted several practices and team meetings, ultimately setting their goals for the tournament while improving their skill sets. As a result, the team was able to approach their district matchups dedicated to achieving first place.

“[We] stayed focused and set individual and team goals. We had a team meeting before leaving, and we set a team goal that all 14 wrestlers would qualify for regionals. Technically, all 15 made it, with Gaby Caro qualifying for the regional in the girl’s division last week,” Coach Ken Gendason said.

As the tournament began, wrestlers of the MSD team competed within their respective weight-class brackets, eventually making their way up the ladder.

With their skills honed in, the MSD wrestlers were able to all contribute towards the team’s advancement. By the end of the tournament, every MSD wrestler placed at least in their bracket’s final four, ultimately allowing for them to all be selected for the later regional competition.

Placing fourth in their brackets were Caleb Hebert, Lucas Siqueria and Christian Moncoya. After putting in a lot of hard work all season long, these wrestlers were able to step up when it mattered most, especially after the MSD team had lost some players due to injuries.

Hebert would end up rising in the elimination rounds of his bracket in dramatic fashion, as he re-rolled an opponent from Deerfield High School in a comeback-style pin to advance past one of his matches.

Xander Kooby and Aris Skarecki placed third in their brackets, also showing their great efforts and contribution towards the team’s advancement, including a tremendous comeback in the tournament from Skarecki.

“As mentioned, Hebert was nearly pinned and eliminated, and heavyweight Aris Skarecki was upset and pinned in the first round and had to win a close match over his Deerfield opponent to make the regionals,” Gendason said.

However, the team’s greatest contributors were the five champions: David Leiva, Lorenzo Pelligrini, Lenny Cipolla, Vincent Dion and Charles Dion. Due to their victories, MSD was crowned district champions, a title that had not been won since 2011.

“This is an incredible accomplishment. This is the first time as a coach for me. It is not easy to do. I couldn’t be any prouder of what this team has accomplished. They have exceeded so many expectations,” Gendason said.

Moving forward, the team looks towards achieving a victory at the regional championship at Miami Braddock High School on Friday, Feb. 25, and Saturday, Feb. 26. Despite the expected difficult task, the MSD team is set to dedicate their efforts to become regional champions.

Gendason believes advancing to a higher level will be more challenging this year because MSD was reassigned to 3A Region 4, also known as the ‘Region of Doom’ because it is the hardest region in all of Florida, in all of the classifications.

“If we can get several wrestlers to day two and push as many wrestlers close to making states, that would be a big accomplishment,” Gendason said. “Most of the wrestlers that place in [3A Region 4] go on to win or place at states. Region 4 has several national champions and All-Americans in it, so it will be exciting to see our team compete in this region and give them the chance to see how hard they will have to work in the off-season to compete in this region.”

As the team prepares for the regional championship, they look to make the 2021-2022 wrestling season an overall success, ultimately seeking to claim first place in the competitions they enter.