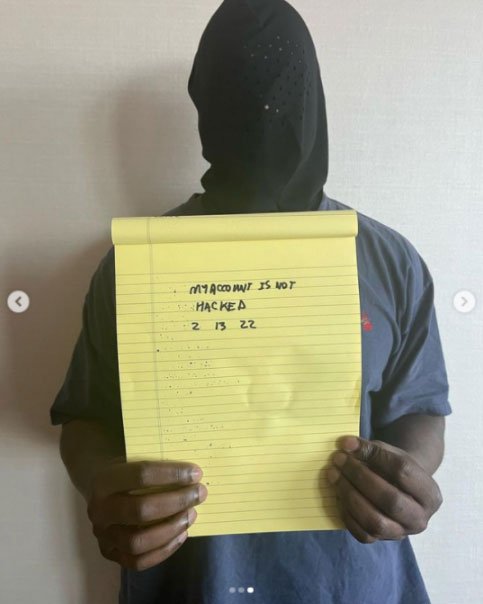 Kanye West posts a picture of himself to Instagram holding a note clarifying "MY ACCOUNT IS NOT HACKED" and a cryptic date.

Kanye West, a prominent rap prodigy and business mogul, has been a figure of public eye since the early 2000s. With 22 Grammys, 11 solo studio albums and a popular clothing and footwear line, it is obvious that West is talented. However, his talents are often overshadowed by his ridiculous publicity stunts and embarrassing actions. Someone needs to put a stop to Kanye’s outrage.

West is well-known for being brutally honest. He has been in both positive and negative lights for his opinions. However, his honesty has shown in attacks on multiple people, as well as companies whom he thinks crossed him. Specifically, West recently called out Apple, stating that he turned down a hundred million dollar deal with them because he would not be able to earn money from the company.

His inability to keep personal issues out of the public causes problems not only for himself but the people on the receiving side of the verbal and digital assaults. Over the past ten years, West has started arguments with over twenty celebrities, ranging from pop singer Taylor Swift to comedian Pete Davidson and his ex-wife Kim Kardashian.

The superstar’s most recent outburst is publicized on Instagram. In short words, he accuses Davidson of being a homewrecker to his marriage and making a mockery of West’s mental illnesses on Saturday Night Live (SNL). From ranting about Davidson, and even calling him “Skete,” West went on to warn Lorne Michaels, the head of SNL, that he is up next in his series of posts intended for payback.

More times than once, West has demonstrated his celebrity power and superiority through his egoistic personality. At previous shows where he showed up late, his fans were let down yet continued to support him. The power put in his hands by dedicated and faithful fans has been taken too far to the point where West thinks that he can make the rules.

He has taken his power and turned it into a God complex. In interviews and songs, West has referred to himself as a genius, a God and even Jesus. On his album “Yeezus” he even has a song called “I Am A God.” West may think he is a God but he comes across as a narcissistic egomaniac.

Despite his absurd social media posts and self-absorbed personality, West is very talented in his songwriting and producing. He worked his way up from the bottom of the industry to one of the most well-known rappers of all time. However, his chart-topping albums cannot erase or make up for his actions, which have caused havoc in his family and on the internet.

West needs a new publicist to help regulate what he says to the public. His loyal fans should be able to realize his mistakes and hold him accountable. By doing this, he would gain the respect of more people, new fans and myself included.