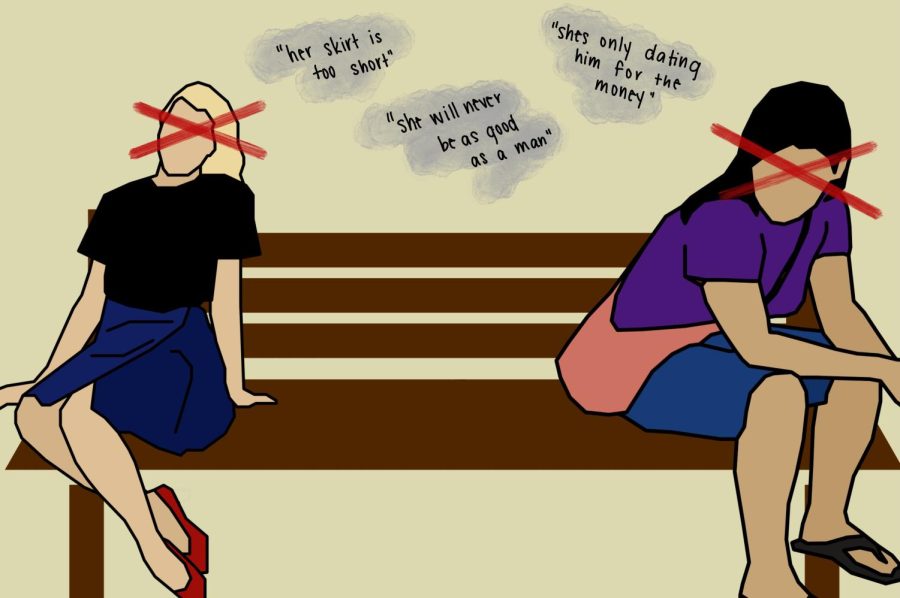 Many female MSD students have reported experiencing misogyny, both directly and indirectly, throughout the 2021-2022 school year. During the start of the year, the primary focus for many students was dress-coding, which critics say discriminates against female students and contributes to rape culture.

Misogyny is prejudice or discrimination against women. Rape culture is the idea of which, in our society, rape is pervasive and normalized. Victim-blaming, slut-shaming, objectification, the trivialization of rape and denial of widespread rape are all examples of what contributes to rape culture.

“When I was scared that I would get dress-coded, I either used a jacket to cover my shoulders and chest, or I pulled my skirt down a little,” freshman Tam-an Nguyen said.

Nguyen’s experience is a common one, with 55.9% of high schools reporting they enforced a strict dress code in 2017-2018 data.

Administration maintains that girls are only dress-coded more because current fashion trends for women typically show more of their body. While dress-coding has appeared to lessen in recent months, female students still express concerns about other instances of misogyny they have faced on campus.

Mansplaining is a term that rose in usage over the last decade, meaning “to explain something to a woman in a condescending way that assumes she has no knowledge about the topic.”

*Jane describes being mansplained by an MSD teacher, where the teacher was condescendingly explaining to the anonymous student about AP classes, although the student made it clear they were aware of the information.

“I felt really mad because he was explaining things to me that I didn’t ask him for nor did I need explaining,” freshman *Jane said. “He was taking over [the conversation], making me feel like I didn’t have a say in the conversation and embarrassed.”

*Jane felt silenced, but confident that the teacher would have not done the same with a male student.

A chart by Kim Goodwin went viral in 2018, showing what mansplaining was, essentially explaining the term in a simple chart. The chart starts with “Did she ask you to explain it?” If the answer is “yes,” it’s not mansplaining. The chart continues if the answer is “No,” asking if you have more relevant experience, if most men with her education and experience already know this and if you asked if she needed it explained.

Misogynistic situations are not only fueled by teachers, as freshman Melanie Anaya describes an incident during a group discussion activity by students. The question, “Do you think women have equal rights as men?” was asked. Several boys in her class ranted about how most women marry men for their money, make false sexual harassment accusations to people they don’t like and said it was unfair that women get more child support in divorces.

“It made me feel frustrated that guys these days still think this way,” Anaya said. “I respect people’s points of views, but I hate arguing about my own rights to someone who [does not know] what it is like to be a woman.”

Anaya noticed that several other female students in her class were uncomfortable or angry.

“In some classes, if the boys are being rowdy or loud, they usually don’t have any consequences and just get reassigned to sit in between girls,” freshman Aesha Bhavsar said. “When the girls do the same thing, they usually do have [more serious] consequences.”

Bhavsar feels there is a significant double-standard in the punishments between girls and boys, as boys simply get a moved-seat; she notes that many girls get detention or snarky comments. Some attribute this to the common phrase, “boys will be boys,” which dismisses behaviors of boys, while holding girls to a higher standard of behavior.

While the experiences of these students are not unique, the frustration and concern by many female students leads critics to believe these issues need to be discussed.

*Names indicated were changed to protect the student’s anonymity