[Opinion] Dark humor should not be used to excuse insensitive jokes 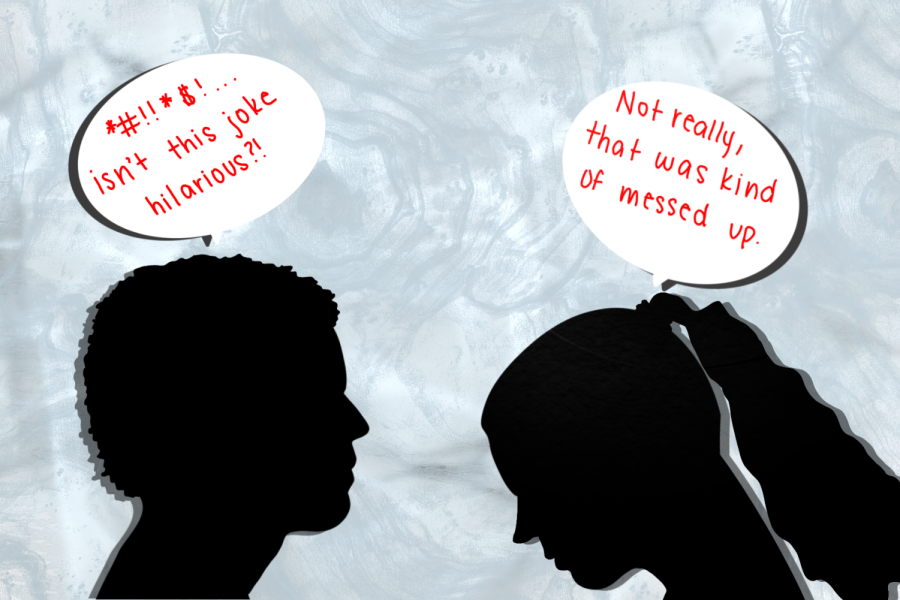 Dark humor can be perceived as insensitive by others. Not only can these comments be offensive, they are often unjustified.

In today’s world, an individual’s humor plays a unique role in his or her life. Whether it’s using comedy to cope with or lighten up a serious situation, every person has their own sense of humor. One particular sense of humor, called “dark humor,” has created controversy among people who witness and use it.

According to dictionary.com, dark humor can be defined as “a form of humor that regards human suffering as absurd rather than pitiable, or that considers human existence as ironic and pointless but somehow comic.” Typically, these jokes have cruel and morbid meanings that appear somewhat humorous. However, dark humor has gradually normalized both controversial and sensitive topics.

Recently, people have misinterpreted dark humor, leaving them unable to distinguish dark humor from an insensitive joke. Society has shaped this humor into excusing misogyny, racism, abelism and homophobic jokes by passing it off as “dark humor.”

If you were to actually look up “dark humor jokes,” chances are you can find hundreds of websites consisting of multiple categories of these jokes. You will find a common theme in these jokes, which is chaotic but also lighthearted. Dark humor did not originally contain inconsiderate and ignorant meanings against a person like they currently do.

The problem is not dark humor itself, but rather people excusing their highly inappropriate jokes by labeling it as “dark humor.” This allows people to easily get away with offending others and breaking a vulnerable person down in a very derogatory manner. If individuals know they can get away with it, they will only continue to make these disrespectful jokes.

When people are called out if they make harsh jokes in a belittling manner, they will attempt to make claims that “it’s just a joke” or “it’s dark humor, you don’t get it.” People will defend themselves by insisting their actions are okay just because their jokes are considered “dark humor.” It is unfortunate that people will try so hard to excuse their unacceptable behavior.

As time goes on, dark humor has been constantly normalized to include and excuse degrading jokes. Originally, this type of humor was never intended to cover controversial and sensitive topics, but society has allowed dark humor to be portrayed and accepted in this light.

It is about time people stop using misogyny, racism, ableism and homophobia as the root of their unacceptable jokes. It is better to just avoid dark humor in general because it has been modernized and adjusted to break people down as a consequence.