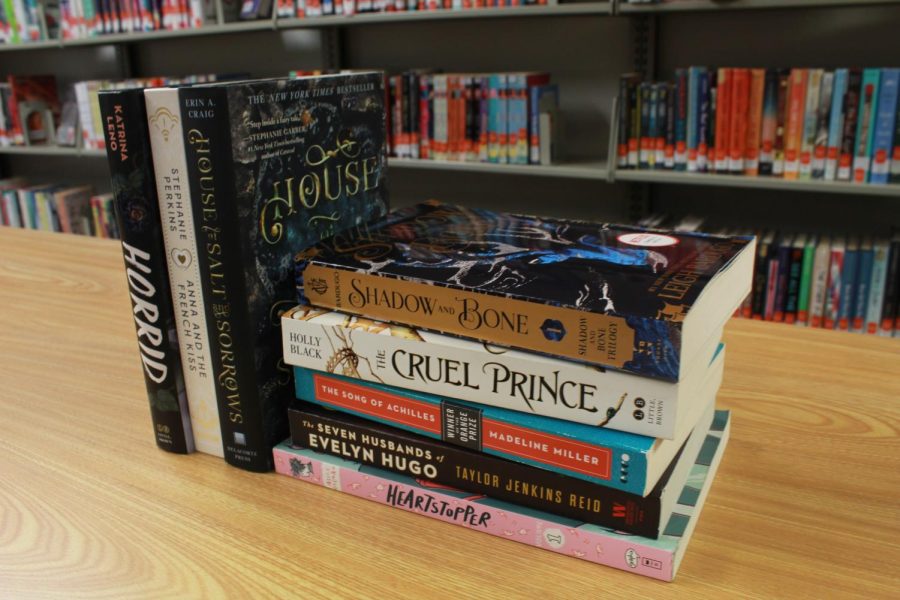 The Top 8 books for teen readers come from various genres. ranging from romance to historical fiction.

From what genre and tropes to pick and what authors write the best, it could be challenging to find a starting place when it comes to what book you should read. Since the process of choosing a book could be difficult, here’s a list of great books to read.

“Shadow and Bone” by Leigh Bardugo

“Shadow and Bone” is the first book in a Young Adult fantasy trilogy by Leigh Bardugo. It follows main characters Alina Starkov and Mal Orestev who have been best friends since they were kids. However, Alina discovers that she has rare ablities that separates them from each other and plunges her world into darkness.

A Netflix adaptation of the series was released on April 23, 2021, and many fans of the book enjoyed the adaptation for its accuracy. The world-building and creation of the universe in “Shadow and Bone” is incredibly easy to understand and has a plot twist that will keep you on your toes.

This series is perfect for teenagers who want a good introduction to fantasy.

“Horrid” is a young adult thriller about teenager Jane North-Robinson who moves into her mother’s childhood home after her father dies. What she doesn’t know or doesn’t remember is that the house has a very dark history that she was involved in when she was just a toddler.

Jane’s curiosity soon got the better of her, which prompted her to pick the lock to the “storage room” her mother told her not to enter, in which she learns that it’s not a “storage room” at all.

This book is perfect for teenagers that are into Stephen King and Agatha Christie’s books with a chilling twist, a haunted house and a classic mean-girl trope.

“The Cruel Prince” by Holly Black

“The Cruel Prince” is a young adult fantasy novel about a human girl, Jude Duarte, whose parents were murdered 10 years before the start of the book. She, along with her two sisters, was taken to live in the High Court or Royal Court of Faerie. Duarte wants to belong in Faerie (the city where fae, Redcaps which is a goblin-like species, nymphs and water sprites reside) and find a place in the royal court.

The book is mainly political, with its focus on war. It is also about the Faerie Court drama with a small romance subplot as the series progresses. This series is perfect for teenagers who want more of a storyline over plain romance.

“The Seven Husbands of Evelyn Hugo” by Taylor Jenkins Reid

“The Seven Husbands of Evelyn Hugo” is a historical fiction about a woman named Monique Grant who was selected to write a biography on the interesting life of the old Hollywood star, Evelyn Hugo. Hugo’s true-life story was kept hidden until this moment, and Grant is shocked to discover all the big secrets that the star has kept throughout the years.

The book is filled with an overall thrilling story and insane twists and turns.

“The Seven Husbands of Evelyn Hugo” is perfect for teenagers who enjoy reading about the ups and downs of romance and drama.

“House of Salt and Sorrows” by Erin A. Craig

“House of Salt and Sorrows” is a twisted and dark retelling of the Brothers Grimms’ “12 Dancing Princess’” story, with a seafront setting and a lineup of sea gods. Once, there were 12 sisters, but slowly, some of them started to die from the plague and drowning incidents. Annaleigh, the main character, starts getting strange dreams and visions of ghosts, and about her sister’s deaths.

With her remaining sisters sneaking off every night to go dancing, Annaleigh isn’t sure if she should join them due to their dreams.

This book is perfect for teenagers who love the original “12 Dancing Princesses” storyline and a dark, thrilling twist to the traditional fairy tale.

“The Song of Achilles” by Madeline Miller

“The Song of Achilles” is a partial retelling of the Iliad, an ancient Greek poem by Greek author Homer. The book is narrated by Patroclus, a young boy that was exiled from his home due to severe acts of violence. He meets Achilles, a highly respected and admired warrior.

The Warrior Centaur Chiron trains them in the acts of war and medicine. The main plot begins when Helen of Sparta is kidnapped and the Greeks must fight and lay siege on Troy. Achilles joins the cause because he is promised glory from the battle. Patroclus is torn between his love, attraction for Achilies and fear for his life.

The beautiful lyrical retelling is perfect for teenagers who are fans of the “Percy Jackson” series by Rick Riorden. “The Song of Achilles” has many content warnings that should be read before picking up the book.

“Anna and The French Kiss” by Stephanie Perkins

“Anna and The French Kiss” is a young adult contemporary romance. Anna’s dad ships her off to boarding school in Paris for her senior year, as he is an author and is constantly traveling and does not want to leave her home alone.

In France, Anna meets new friends and experiences new adventures. She also meets Étienne, the boy who introduces her to Paris and its Parisian lifestyle. Étienne is everything Anna could want in a boyfriend, except he has a very serious girlfriend.

This book is a light-hearted, realistic and fun romance for teenagers.

“Heartstopper” is an LGBTQ+ romance graphic novel about two boys at an all-boys school who catch feelings for each other. Charlie, a high-strung over-thinker, and Nick, a cheerful rugby player, are the main characters of the story about love and friendship.

The novel started out as a WEBTOON, a type of online comic, and became published due to its popularity. There are currently four volumes released, with the highly anticipated fifth volume set to arrive on Feb. 2, 2023. There is also a Netflix series projected to be released in 2022, based on the novel.

This series is perfect for those who enjoy a light-hearted and sweet romance.