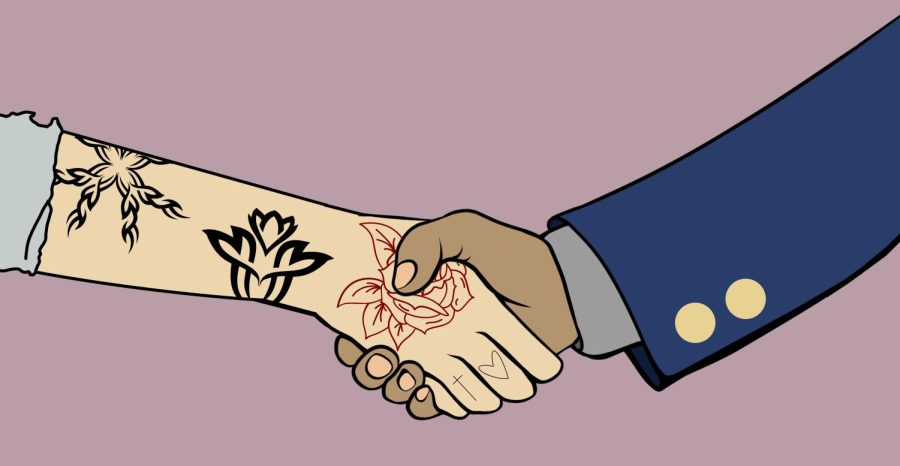 Expressing one’s tattoos are becoming more popular in a work settings despite past stigmas.

Since the beginning of time, people have gotten tattoos for various reasons. Whether it be symbolic of personal life experiences, religious affiliation or for the sake of art, tattoos have been a significant part of our history that each have their own unique story to tell.

Despite the staggering change in public opinion on tattoo acceptance over the past few decades, diverse reasons for engaging in the art of tattoos are often ignored and assumed to be synonymous for having gang or prison affiliation, leading to less employment amongst those with visible tattoos.

At some point in a tattooed person’s life, they are destined to hear “is that tattoo going to limit your job opportunities?” or “how will you find a job?” While this ideology is seen as outdated to younger generations, unfortunately, this difficulty finding jobs is not as outlandish to employers as it may seem.

Under the Equal Employment Opportunity Commission, an employer has the right to set dress codes and define what a violation of this policy is as long as they do not discriminate based on race, sex, age, religion or disability. Through this legal loophole, employers reserve the right to turn away applicants that have visible tattoos, whether outright said or not.

Although employers may reject applicants that do not meet their visual standards, what they do not understand is that not all tattoos have particularly inappropriate or vulgar meanings.

While tattoos can still be associated with gang/prison affiliation, such as the Russian cat or barbed wire tattoos, the percentage of all tattoos that are solely gang/prison related in present day are very slim compared to the vast amount of other meanings associated with getting inked.

In fact, the amount of non-traditional tattoo methods that have surfaced in the 21st century have become far more common than employers may think. Some of these include cosmetic tattooing, microblading, scar coverage, henna, hair tattoos, Native American tribal facial tattoos, etc.

Cosmetic tattooing can range from permanent makeup to scalp micropigmentation to post-mastectomy scar coverage, none of which are seen as unprofessional. Yet those with more traditional tattoos suffer the stigmas attached to being unprofessional in the workforce.

No matter the reason, tattoos signify different expressions for every person, most of which do not have violent or gang affiliated meanings.

The ideology that tattoos make a person unprofessional or unworthy to be in the traditional workforce is severely outdated and ignorant, leading to a less unified and more discriminated society at large. It is time that employers become more open-minded to tattoos, traditional or not, and see their potential employees for their qualities, rather than their physical expressions.