MSD hosts Relay For Life to raise money for cancer 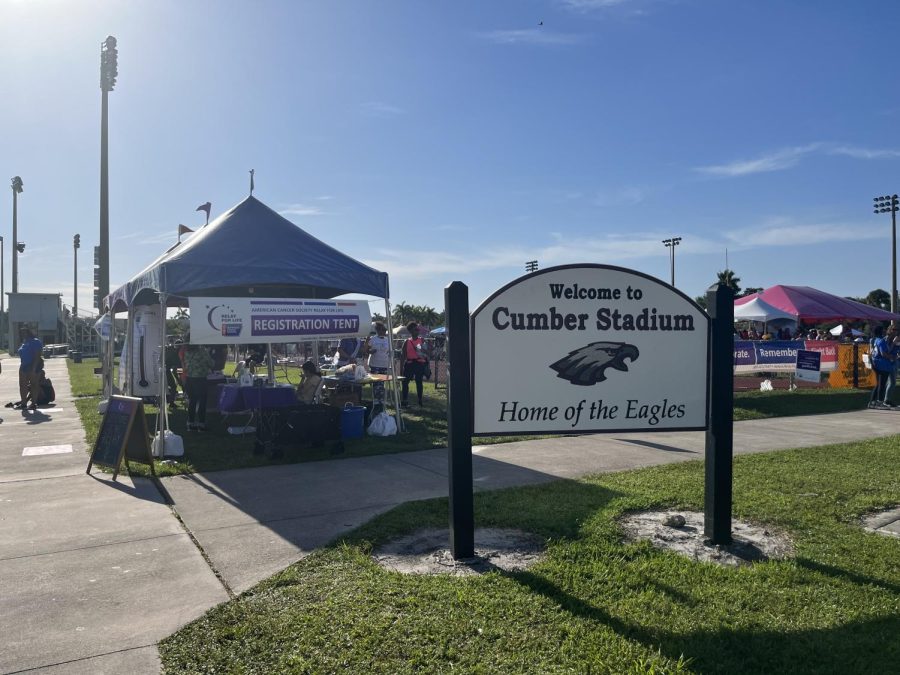 One of the many branches of Relay for Life was held at MSD's Cumber Stadium on Saturday, April 9 from 4 to 9 p.m. Several clubs set up booths around the field to help raise money for the American Cancer Society.

Relay for Life is a fundraiser created by the American Cancer Society to save the lives of people diagnosed with cancer. The organization and the event celebrates the hard work individuals put in when fighting cancer and remembers those who have struggled following their diagnosis.

With nearly 10 million deaths in 2020 alone, cancer is a leading cause of death worldwide.
There are an estimated 16.9 million cancer survivors in the United States, according to the National Cancer Institute as of 2019.

In addition to the ceremonial speakers, musical performances and cancer survivors spoke at the event.

MSD clubs and other sponsors set up tents to sell food and give away items. One such club was DECA, who held a booth and sent out a team to raise money for the American Cancer Society.

“One of DECA’s aspects is participating in community events and philanthropy,” freshman and DECA member Lindsay Rogalla said. “I believe Relay For Life is a really good event to participate in, so I’m happy that [DECA] held a booth and encouraged members to join the team to donate and raise money for the cause.”

DECA was not the only club participating, Key Club also encouraged its members via Remind to volunteer at the event.

“Key Club fundraises year-round for the event and we were able to earn $500 for our team,” senior and Key Club President Elaine Chen said. “In years past, we’ve been able to earn a couple thousand dollars for the event. This year, we provided almost 90 volunteers throughout the day that signed up to help with set-up, operation and clean-up after the event.”

To honor the survivors and remember those who have passed away, participants lit luminaries after sunset. The Luminaria bags were decorated a day prior to the event by students and staff with the theme “Not All Superheroes Wear Capes.” Students were also encouraged to donate refreshments for one service hour per donated item.

People could dedicate a Luminaria to a loved one lost to cancer, someone currently battling cancer or anyone who has overcome cancer. The lighting of the Luminarias after sunset was accompanied by a moment of silence to remember the loved ones to which the bags were dedicated to.

The Luminaria tradition to close out the Relay For Life started in 1985, when Dr. Gordon Klatt walked and ran for 24 hours around a track in Tacoma, Washington in order to raise money to help the American Cancer Society. Since then, Relay for Life has become a global fundraising event to honor and raise money for those affected by cancer.

Participating in the event is a simple process. To get involved, the participant must sign up for a Relay on the American Cancer Society’s website, then choose either to lead a team, join an existing team or participate solo.

Afterward, he or she is able to recruit friends and family to join the Relay and raise money using the resources the Relay for Life platform provides. After collecting donations, participants typically come together to honor survivors and support their community in an in-person or virtual Relay event.

Any individual can get involved in Relay for Life or donate to the initiative by visiting the American Cancer Society’s website.