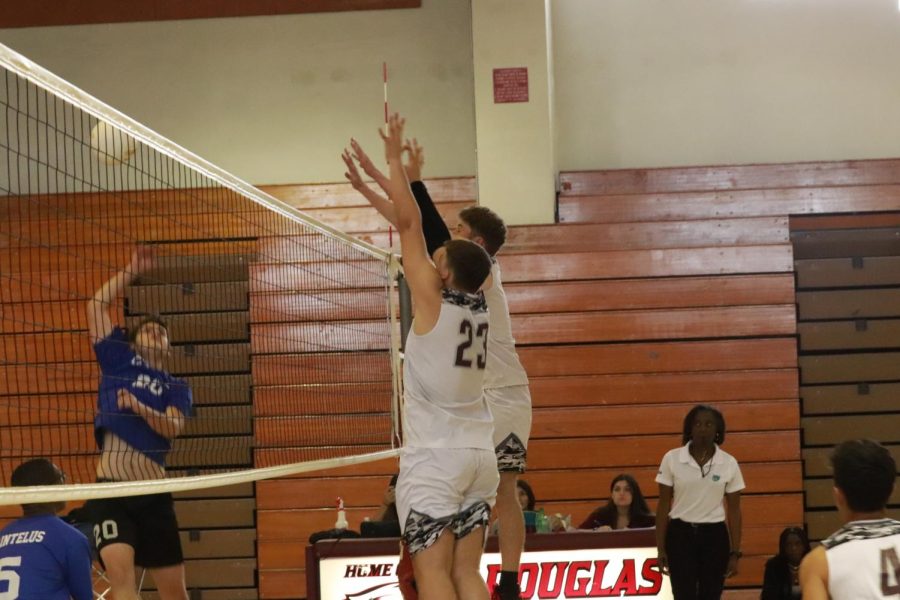 Blocking Balls. Two Douglas seniors jump up and make a block in the game against the Colts.

Wednesday was senior night and it meant a lot for the seniors. Senior night signifies an end to their highschool volleyball career at home.

“Senior night means so much to us seniors,” senior center Tom Heffner said. “We get to leave our legacy and highschool career on the court.”

“I never imagined playing my last game at home,” senior right side hitter Santiago Gerardi said. “It has been so fun playing for this team and I will never forget the memories I had playing volleyball.”

In the first set, the Colts came out punching with a 4-0 lead to start the game. With the improvement on attacking and blocking, the Eagles quickly got back into the game and had a 13-7 after the first timeout.

The Eagles did not slow down in this set and continued to grow their lead. By the second timeout of the set, the score was 18-10 and the Eagles eventually won 25-13.

“We started off slow, but quickly got rid of the jitters of senior night and got a hang of the game,” Gerardi said.

MSD had the same energy to begin the second set as they got off to a quick start. Coral Springs did not help themselves either, due to miscommunication and mistakes on the ball. The Colts eventually picked up their play and came back in the set.

Coral Springs closed the gap quickly and tied the game up at 19. The Colts tightened up and did not make a lot of mistakes late in the set, which led them to winning the set 25-23.

“We got outplayed late in the second set,” libero Jase Perkins said. “We made some mistakes and that really screwed us.”

In the third set, the Eagles came out on fire as they quickly took a commanding 8-4 lead, which led to an early Colts time out. The Eagles kept landing all of their spikes and that helped then come from behind to cut the lead down to two. MSD went on a quick run and had full momentum to take the lead in the set 21-17. Both teams played excellent defense and the set was still open for either team to win. Unforced errors by the Eagles lead to a 25-22 win for the Colts, resulting in another dropped set for MSD.

“Our errors late in the game really killed our chances of winning,” Perkins said. We need to clean those up to win games.”

At the start of the fourth set, MSD came out with great hustle. Both teams were making great plays and showing elite hustle.

“We wanted to win badly, and that brings out the best of all of us,” Gerardi said.

The set was very evenly coated with both teams taking leads. Both teams were tied with a score of 19, and the Eagles needed to win the set to force the deciding set. Douglas was unable to come out strong in the fourth set with many errors that handed Coral Springs the victory. The final score of the last set of the match was 25-20.

Douglas plans to take on Deerfield Beach High School on Wednesday, April 27. They look to pull off an upset in the first playoff game as Deerfield is 6-7.