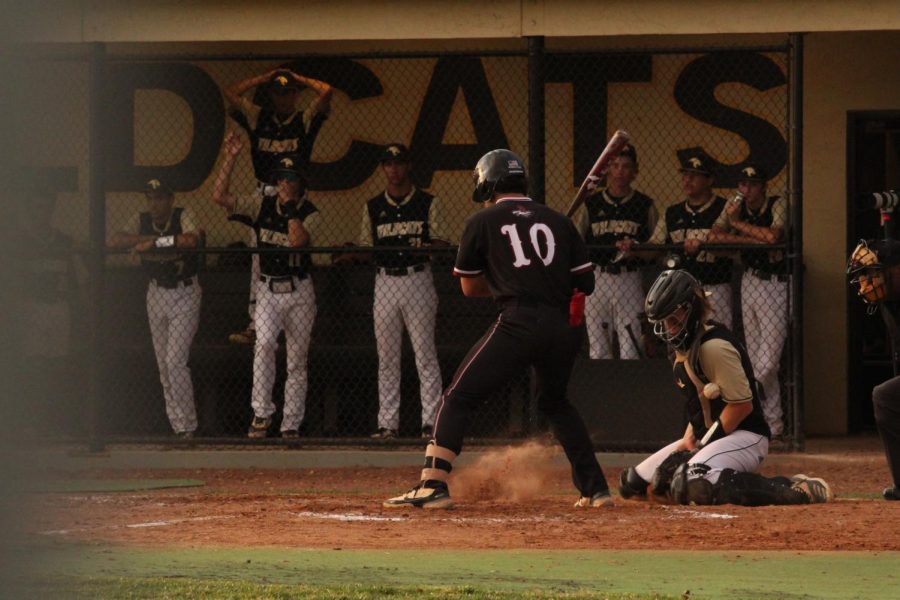 First baseman Christian Rodriguez (10) loads out of his batting stance to let the grounded pitch by. Rodriguez grabbed two hits during the game, contributing towards the Eagles' 14-8 victory.

On Wednesday, April 21, the Marjory Stoneman Douglas varsity baseball team made their way to Western High School for their 22nd game of the season, looking to improve upon their successful 20-2 record.

Coming off a recent victory at the National High School Invitation tournament in Cary, North Carolina and four non-district wins against Archbishop McCarthy, Western Branch, West Boca Raton and Coral Glades, the Eagles looked to capitalize off their growing momentum.

“We have been playing together and not focusing on ourselves as individuals,” infielder Jacob Herzberg (4) said. “When we come together as a team and play together is when we play best. We have trust in everyone in the lineup and if one person doesn’t do the job we have trust in the guy behind him to come through.”

However, the Eagles would not have as easy of a fight in the match, as the 17-3 Western Wildcats were looking to improve their successful record as well, that of which contrasted with the many mercy-ruled teams that the Eagles had recently faced.

After the first pitch was thrown at 6:30 pm, the Eagles got an early lead to start their away match. Catcher Santiago Ordonez (12) led the Eagles to get ahead quickly, hitting a single that brought in two runs. Soon after, infielder Chris Harris (6) hit a sacrifice fly ball to left field, scoring center fielder Alex Rodriguez (13). With the Eagles already leading by 3, they continued to show offensive dominance as pitcher/outfielder Jake Clemente (24) hit a home run, ultimately bringing the Eagles to a 4-0 lead exiting the first half of the first inning.

To combat the Eagles’ scoring however, the Wildcats homered for two runs early in their offensive effort, making the score 4-2.

In the second inning, the competitive spirit of both teams was evident, as both teams brought in one run on their respective sides. For the Eagles, Ordonez singled on a line drive, bringing in outfielder Roman Anthony (22). On the Wildcats side, an Eagles wild pitch allowed for a runner to score, bringing the game to 5-3.

The third inning brought the game’s score to a closer margin as a scoreless Eagles offense, followed by an RBI double for the Wildcats, allowed for a 5-4 score.

However, the Eagles retaliated and earned their runs back, ultimately gaining a larger lead in the fourth inning. With a home run from Arroyo, single from first baseman Christian Rodriguez (10) and double from Harris, the Eagles scored four runs to increase their lead to 8-4.

While the Eagles seemed to pull away with the win, the Wildcats followed a scoreless fifth inning with a rousing sixth, scoring four runs. Heading into the seventh and final inning of regulation, the Eagles found themselves in a competitive struggle as the game was tied at eight.

Both the Eagles and Wildcats went on to hold off their opponent in the seventh inning, pushing the game into extra innings. This tight competition carried over into the eighth inning as well, leaving both teams tied for yet another inning.

It wasn’t until the ninth inning in which the Eagles displayed their true skill and team chemistry, as the Eagles’ offense built off one another in order to score multiple runs at a crucial point in the game.

With runners scoring on multiple occasions including a double from pitcher Rylan Lujo (14), home run from Anthony, single from Harris and stolen base from C. Rodriguez, the Eagles pulled away with the late lead.

As the Wildcats were unable to return a score, the Eagles pulled away with a 14-8 win to end the game.

Throughout the game, the Eagles showed off their dominant offensive skills that have led to success throughout the season, and the team looks to advance their hitting abilities as the season closes in.

“The team’s hitting was great, we scored 14 runs with just 15 hits,” Ordonez said. “Additionally, my hitting was the best part of my game as I was 3-4 at the plate.”

The team’s chemistry, skills and commitment have allowed for a successful 21-2 record thus far in the season, and they will continue to strive for greatness as playoffs approach towards the near end of the season.

Moving forward, the Eagles look to claim a victory against the American Heritage Delray Beach Stallions on Wednesday, April 27, at 7 pm.