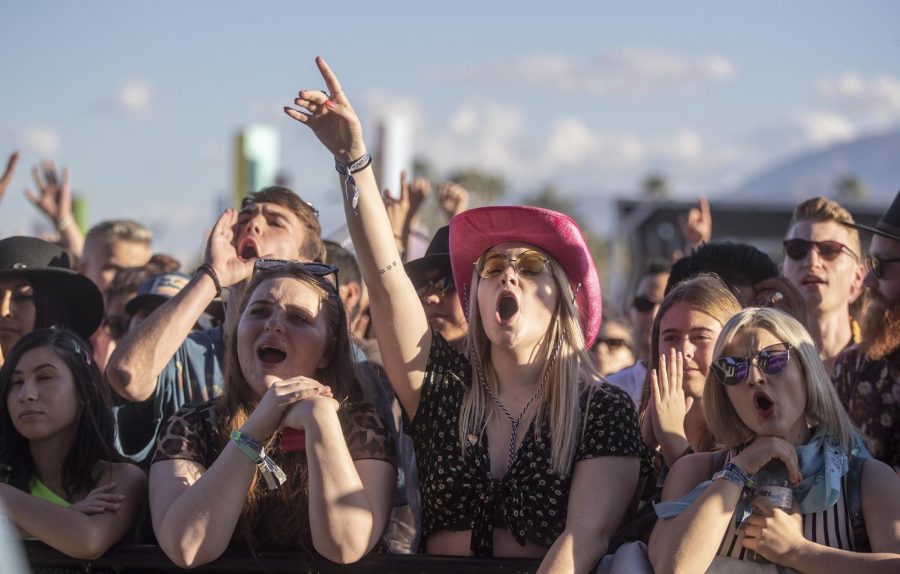 Fans cheer at a music festival called Coachella where they watch celebrities perform sets of their music.

Every year, a six-day music festival called Coachella takes place in Indio, CA. It is a place where celebrities and influencers gather to watch a wide variety of musicians perform a set of songs. The festival does not stop at just music though, as it also has become a place to wear elaborate outfits and show off personal style. The outfits vary from flashy fashion statements to ones that make viewers cringe, so here are the ratings of the best and worst Coachella outfits:

Year after year, beauty influencer James Charles attends Coachella in outrageous outfits. He is not one to shy away from clothes that expose a lot of skin, considering in the past he has worn chaps and thongs to the music festival. This year, the public was shocked to see him in a full bodysuit.

The mesh catsuit, which is thermal-printed and custom made, shows off Charles’ curvaceous body. Though the outfit is more modest for the influencer, he still chose to cover his pelvic area with blue shorts due to the worry of it being too inappropriate. The look was completed with eye makeup that resembled the thermal pattern shown on his body.

Overall, the look was absolutely atrocious. With a strange style and an unfavorable mix of colors, his outfit has become a joke spread across the entire internet. Since his outfit so closely resembles a colorful thermal weather radar, some people have even decided to make videos spoofing a weather report using Charles’ outfit. Maybe at the next Coachella, Charles will learn that looking like he just jumped out of Weather Channel Headquarters is not a good look. I give his outfit a 3/10.

Billie Eilish is a pop singer known for her soft vocals and hit songs that have won her seven grammys. At Coachella, she showed off her unique performance style through her presentation of “Lovely” and an acoustic version of her hit song “I Love You.” Eilish’s singing was delightful as always, but it is hard to say the same for her outfit.

At the festival, Eilish sported a baggy, beige t-shirt and biker shorts that were both covered in graffiti. In addition to the simple, yet sporty outfit, she wore knee-pads, wrist covers, and an assortment of chunky necklaces. Personally, I was disappointed with how boring the outfit was for an event where the status quo is to wear something more extravagant.

Another critique of the outfit is the knee-pads. Though they are protection for if she falls during her performances, it still looked quite odd and could have been executed better. Overall, Eilish’s outfit looks like she is about to play volleyball in a prison which just does not work for an event like Coachella. She could have done so much more with her unique sense of style, yet decided to do the bare minimum. I give this outfit a 5/10.

Doja Cat is an incredibly talented pop-rap artist who is adored by fans across the world. This year at Coachella, she performed some of her most popular songs such as “Say So” and “Kiss Me More,” wowing the crowds at the festival. During her set, Doja wore a custom made Caroline Reznik dress with blue sequins, which complemented her body amazingly.

The unraveled dress looked spectacular, being unique enough to capture the eyes of viewers without making it look tacky. The deconstructed dress looked absolutely extraordinary on her, despite it being an out of the box choice. It matched the overall vibe of the music festival and really set the singer apart from the rest.

The blue sequins that adorn the dress are another bold choice, but they worked in Doja’s favor nonetheless. They were spread out nicely and decorated the fabric of the dress attractively. This is definitely one of my favorite looks from the festival so far. I rate this outfit a 10/10.

R&B singer Giveon had an amazing performance, singing his famous songs including “HeartBreak Anniversary” and “Stuck On You.” Not only is his singing always comforting, his clothes are too. He showed up in a cotton mint green button up top with white and black speckled Chanel trousers. He complimented this outfit with Tiffany & Co. Jewelry and black boots.

Giveon never disappoints with his fashionable street wear. This look was perfect for him, considering he produces inspiring and relatable music that touches people’s souls. His voice is angelic and soft, and the light tones and simple look nicely represent that.

Kendall Jenner showed up to Coachella in one of the most basic, yet stunning outfits of the event. She wore a cropped white tank top, white cargo pants, and a petite black shoulder bag. To finish off her look, she wore braided pigtails and topped it all off with square-framed sunglasses.

Jenner has shown up to Coachella in more basic outfits over the years, and keeps proving that simple does not mean boring. She had a soft, natural makeup look which really made for a pure and authentic image she was going for. The reality TV star was also seen representing her tequila brand, 818.

A lot of people expected the Kardashian-Jenner clan to show up in crazy attire, but they surprised us the most with their subtle outfits. So many people forget that you are standing in a desert-like area for hours on end in the burning sun, so it is better to be safe than sorry. I rate Kendall Jenner’s outfit a 8/10.

Differing from the light tones that were seen from the other celebrities, actor and singer/songwriter Sabrina Carpenter showed up in a classier outfit. She wore a glittery, black and gray patterned dress with silver heels to match her large silver hoops. Carpenter also had light makeup on and her hair put up in a messy bun to give off a more “messy hair, don’t care” look.

She finished the look with a handbag that had silver sequins all over it. The overall look was very simple and carried the same theme throughout each item, which really tied it all together. However, she could have worn something that was more unique. The dress seemed like something that was laying around in her closet.. She could have done a better job at dressing up the outfit with jewelry that could have made her outfit stand out.

Carpenter joined many of the celebrities that had the more simple looks at Coachella. The whole look overall did not really stand out and I think there are so many more outfits that she could have worn. I rate Sabrina Carpenter’s outfit a 6/10.

Justin Beiber is a seasoned pop singer, who has been working in the music industry for nearly 15 years. Although he was not a headliner for this year’s Coachella music festival, Beiber made an appearance during Daniel Caesar’s set for his portion of their hit song “Peaches.” Being in the spotlight for many years, Beiber has experience under his belt, or shoelace, with dressing well for performances. However, his outfit at Coachella did his “well-dressed” reputation no justice.

Bieber wore half an outfit, meaning he was shirtless with a pair of baggy Balenciaga jeans and sneakers, as well as Calvin Klein boxers, a red baseball cap, and a shoelace to tie the outfit together. Literally. Although I understand Beiber’s attempt to stay on brand with his new “skater-boy” aesthetic, which consists of baggy clothes, I was disappointed with the blandness of the outfit.

I think Bieber could have been more adventurous with his outfit, while remaining within the bounds of his desired aesthetic appearance. One of my biggest criticisms that threw Beiber’s outfit off the deep end for me was the shoelace belt and his visible underwear, as the look was dwindled down to more of a comfortable feel, failing to meet the high standards of Coachella.

Overall, Beiber’s outfit goes to show that expensive brands can appear cheap, and even a little musty, depending on the way you style it. Personally, I think there were so many things that could have easily been corrected to salvage some of the greater components of his outfit, such as his Balenciaga jeans. I rate Bieber’s outfit a 3/10.

Pop singer Harry Styles is notorious for stunning crowds with his eccentric outfits, and he certainly did not disappoint at Coachella. He performed his new hit single “As It Was” in a Gucci jumpsuit covered in rainbow sequins and paired with leather boots, chunky rings, and his signature cross necklace. The suit dips down near the sternum area, revealing much of his tattooed chest. To add some suspense to his style, Styles came out on stage in a giant black feathered coat, revealing his jumpsuit mid-song.

Styles’ jumpsuit fit perfectly with his electric performance, in which two songs from his new album “Harry’s House”were premiered. The sequins on his jumpsuit calls for attention from any source of light, almost resembling a disco-ball. Although there were not many pieces involved in Styles’ outfit, the simplicity of the jumpsuit allowed for the sequins to be more tasteful than tacky.

Overall, Styles’ bold outfit choice worked in his favor, as fans absolutely adored his colorful and shiny outfit, myself included. Personally, I think Styles’ outfit was perfectly appropriate to match with the vibe of his music and the festival. I rate his outfit a 10/10.

Megan Thee Stallion is a renowned female rapper in the Hip Hop Industry with her catalog of risque, but catchy, songs. She made her Coachella debut this past week, rousing the crowd with some of her hit songs, such as “WAP” and “Savage.” During her set, Megan wore a silver Dolce & Gabbana bodysuit encrusted with Swarovski crystals. She completed her ensemble with a full makeup look that complemented her suit’s silvery glow.

Megan’s bodysuit was a great choice to match her music’s spicy theme, as it emphasized her body’s curves as intended. The suit’s silver color paired nicely with her skin tone and the crystals added dimension to her outfit. I think these elements put together made her look stunning.

Overall, I enjoyed the aspects of Megan’s outfit and the correlation to the theme of her music as well as the festival. However, the outfit was simply not eye-catching or bold enough to be considered one of my favorites. Due to the balance between her overall stunning, yet underwhelming appearance, I rate Megan Thee Stallion’s outfit a 7/10.