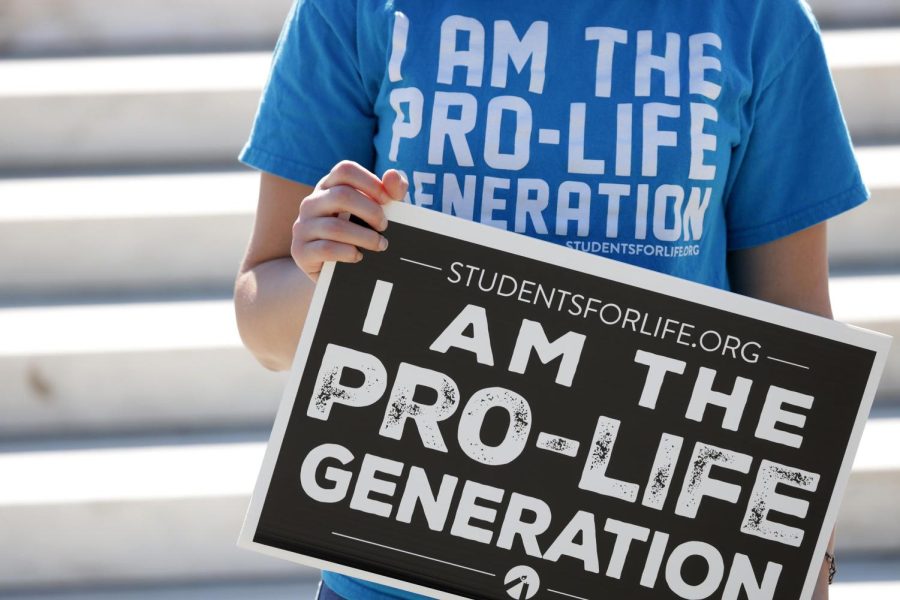 A pro-life activist holds a sign during a demonstration in front of the U.S. Supreme Court on June 29, 2020, in Washington, D.C. Courtesy of Alex Wong/Getty Images/TNS.

Florida’s House Bill 5 bans abortions after 15 weeks of pregnancy. The anti-abortion measure contains exemptions past the first trimester if the abortion were to save the mother’s life, prevent injurious risk or if there is a fetal abnormality. However, HB 5 does not allow exemptions for victims of sexual assault, rape or incest. The bill was passed by the legislature on March 15 and was signed into law by Gov. Ron DeSantis on April 14. The law will go into effect on July 1.

Before this new law, women in Florida could seek abortions for up to 24 weeks.

Florida’s ban is modeled after Mississippi’s law that similarly banned abortions past 15 weeks of pregnancy. The law is currently under review by the Supreme Court.

“The right of women to make decisions about their own bodies is non-negotiable,” Vice President Kamala Harris said in a statement from the White House. “If signed into law, Florida’s bill would violate the constitutional right to abortion that the Supreme Court has recognized for nearly 50 years.”

In light of the rise of anti-abortion laws, some, largely Democrats, fear an end to the controversial Roe v. Wade era, where the landmark 1973 Supreme Court decision stated the constitution protects the right to access was in place. Its repeal is a measure that seems impending as a May 2 leaked draft opinion of Dobbs v. Jackson Women’s Health shows SCOTUS siding with Mississippi’s law.

Although the draft opinion is not final, the draft included details that the right to abortions would be “taken away.” Allegedly, the Supreme Court majority is for the overturn, with Justice Samuel Alito calling Roe v. Wade “egregiously wrong from the start.”

“We are here today to defend those who can’t defend themselves,” DeSantis said on April 14 in an evangelical church. “Of course, these are babies that have heartbeats and that can feel pain and can move.”

DeSantis was surrounded by supporters of the bill, female lawmakers, anti-abortion advocates and children. Advocates from both sides attended to share personal stories regarding abortion, pregnancy and trauma in hopes of swaying DeSantis’ vote. Testimonies shrouded the bill’s passage and signature.

Democratic state Sen. Lauren Book admitted to being a victim of sexual assault in a plea to get exemptions for victims of rape, sexual assault and incest. She shared her experience of being physically, sexually and emotionally abused by her live-in nanny at 11 years old. She endured years of abuse before she spoke up.

“Some rape victims who become pregnant choose to give birth and become loving mothers or give up the baby for adoption,” Book said to the Florida Senate on March 2. “[Others don’t] want to see the face of their rapists every single time they look at their child. And that is their choice. It takes time to make those decisions.”

Book’s statements are not the only objections people have made towards the bill. When asked about their thoughts on the bill, Marjory Stoneman Douglas High School students had strong opinions and some concerns regarding the topic.

“Having a baby could ruin someone’s life, so I think that it’s important to let the individual circumstances speak for themselves,” sophomore Abigail Melamed said.

Melamed, a member of MSD’s Debate Club, brought up the topic of democracy, stating that DeSantis was chosen by the people of the state and represents the people, even if they do not like the legislative bills he is signing.

Other students expressed the need for abortion laws to include exceptions for women who are at fatal risk.

“If they are going to make laws like these, there need to be more extensive exceptions for women, especially since a lot of women don’t even know that they are pregnant at 15 weeks,” sophomore Jane Doe* said. “Women shouldn’t be told who can and can’t get an abortion.”

While some students were strongly against the new ban, others had differing opinions and expressed less concern for the bill.

“I think 15 weeks is a perfect amount of time for a woman to decide if they want an abortion or not,” sophomore John Doe* said. “The baby is less mature and less developed than it would be at 24 weeks.”

Commentary from MSD students corresponds with the statements of the spokespeople at the signing of the bill.

“This is the right to life and to give up life is unconscionable to me,” Republican Rep. Dana Tralsbury said at the passing of the bill last month.

Tralsbury recounted to lawmakers her personal story of a previous abortion procedure and said she, “regretted it every day since,” a commonly cited argument by anti-abortion activists.

Pro-choice supporters often push back against this, citing studies such as the one from the University of California San Francisco that found that 95% of women found that it was the right decision for them.

“I want abortion to be legal, safe and accessible, but I fear this bill moves us in the other direction, forcing women with means to travel out of state and those struggling economically to resort to potentially dangerous options,” Democratic state Senator Lori Berman said at a conference speaking against the 15-week abortion ban.

Florida has the third-highest abortion rate in the country, which is attributed to previously allowing abortions up to 24 weeks. Citizens from other states traveled to Florida to receive abortions.

“In 2017, 71,050 abortions were provided in Florida, though not all abortions that occurred in Florida were provided to state residents: Some patients may have traveled from other states, and some Florida residents may have traveled to another state for an abortion,” a Guttmacher Institute, a leading organization worldwide to promote reproductive and sexual health, fact sheet reports.

Abortion access will continue to change in other states, with states in the south and midwest region predicted to constitute new laws restricting abortion access.

The bans on abortion, including Florida’s new bill, are garnering the attention of elected officials and representatives from across the country. Many are speaking out on the topic, giving their support or their critiques.

“The reality of the [Roe v. Wade] decision is that men on the Supreme Court proclaimed that women, in order to achieve equality with men, must be able to kill their own children,” Republican state Rep. Erin Grall, the bill’s sponsor, said. “As a woman, I refuse to accept such a perverse version of equality.”

Abortion providers in Florida filed a lawsuit on June 1 in an attempt to block the law. At the backbone of this lawsuit is Florida’s privacy amendment. The amendment states that “every natural person has the right to be let alone and free from governmental intrusion into the person’s private life.”

Although the initial Roe v. Wade decision was made due to constitutional privacy laws, it remains unclear whether Florida’s privacy amendment will be enough to block its anti-abortion ban, considering recent court rulings siding with anti-abortion measures. A Tallahassee judge determined Florida’s 24-hour waiting period for getting an abortion, after a seven-year legal battle over the provisions, was allowed to remain in place.

The Supreme Court is expected to announce its decision on Dobbs v. Jackson Women’s Health in June 2022.

*Names were changed to protect the anonymity of students at MSD.