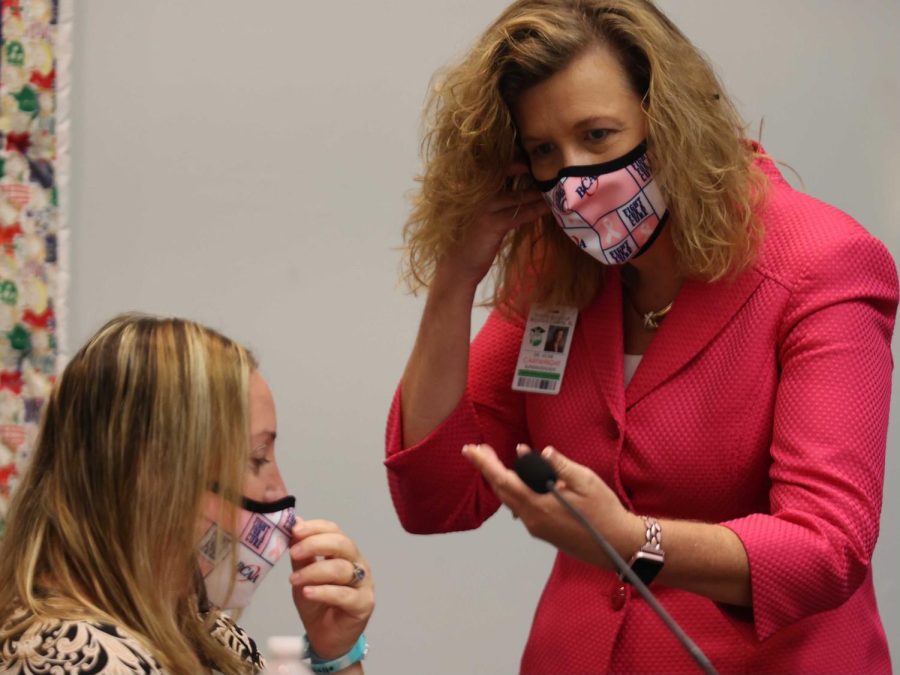 Broward Schools interim superintendent Vickie Cartwright, right, and board member Lori Alhadeff speak before the start of the meeting at the Kathleen C. Wright Administration Building in Fort Lauderdale on Tuesday. Courtesy of Amy Beth Bennett/TNS.

Several school board seats are up this year, including Broward School Board District Four, which includes MSD, and District Eight At-Large. Both incumbents, Lori Alhadeff and Donna Korn, are running for re-election.

Alhadeff, who ran for and was elected to Broward County Public Schools School Board after her daughter Alyssa was murdered in the 2018 shooting, is running against Kimberly Coward.

“I first ran for Broward County School Board to make schools safe, teach our students life skills and ensure teachers have the resources that they need to educate effectively,” Alhadeff’s campaign website said. “I’m proud of all that I have accomplished, but my work is not yet done. I intend to positively represent District 4 on the dais through hard work and relentless dedication to improving Broward County Public Schools.”

One of Coward’s issues is school safety, which she views as not only physical safety but also “address the remaining safety needs of the students, by working collaboratively with staff, teachers, students and their parents” and addressing students’ mental and emotional health concerns. She hopes to make all students the best they can be, regardless of demographic.

“Advancing equity initiatives requires an understanding of the distinction between equality and equity. The former ensures distribution of the same resources and opportunities, whereas the latter focuses on group differences, those likely born from unequal treatment and imbalanced systems,” Coward’s campaign website said. “To address these imbalances, BCPS must be intentional about ensuring that the underserved do not stay underserved. And in so doing, the District must exercise equity and inclusiveness from the bottom up, to include resources, facilities, teachers and staff.”

Other candidates for District Eight At-Large are Raymond Adderly III, Mourice Hylton and Allen Zeman. As with District Four’s race, school security is a big issue.

Adderly hopes to improve pay, something Korn also supports, and working conditions for teachers in an effort to reduce turnover. Hylton emphasizes the importance of quality educators with a greater budget for classrooms.

Other issues important to Adderly are increased community schooling, investments in technical colleges to show students that it is an option and transparency. Transparency is a large issue within BCPS, as they have historically been accused of corruption or incompetence.

“Changing culture is hard, but in this case, it must be done. Transparency needs to start now, before the election. Voters deserve to know what is in latest the grand jury report which was completed 15 months ago. They need full disclosure about who is paying the lawyers to keep it from the public and whether public funds are being used to pay lawyers to keep information from them.””

— Allen Zeman in an interview with the Sun Sentinel

In addition to school board seats, BCPS has a tax referendum on the ballot on Aug. 23 to supply funding. If the referendum is not passed, it can only be reintroduced during a general election year, following the passage of SB 1124.

To learn more about the referendum, people can visit the BCPS website.