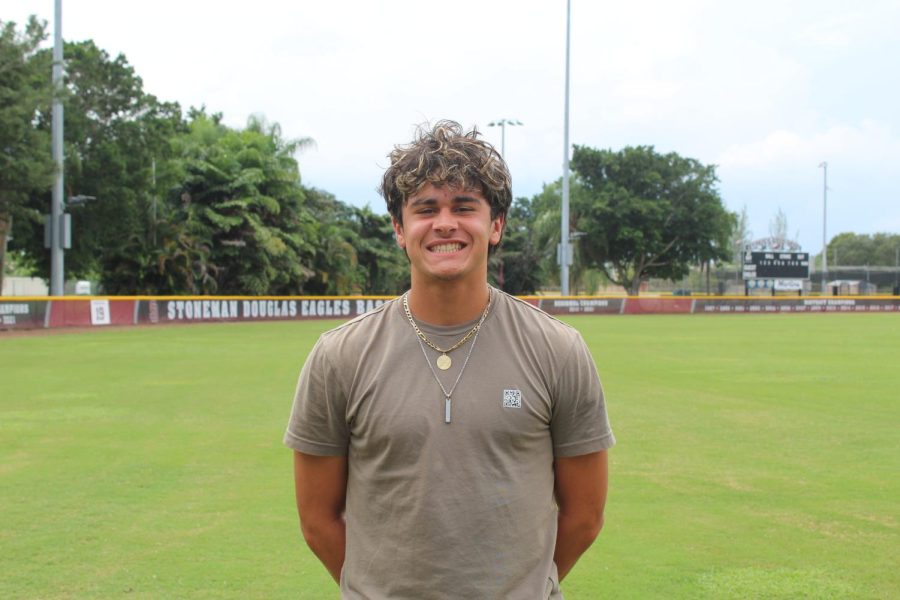 Freshman Lorenzo Laurel looks up into the stands as he is on deck for the Eagles. Numerous college scouts await his at-bat. He steps up to the plate, swings and drives the first pitch fastball into the corner for a double. The nationally ranked player impresses again.

With the Marjory Stoneman Douglas High School varsity baseball season in effect soon, the state champion team is looking for a big impact from outfielder Lorenzo Laurel. As just a freshman, Laurel has gained recognition by many scouts and organizations.

This past Labor Day weekend, high school baseball prospects of the 14 and under division were invited to participate in the Perfect Game Select Festival. Laurel participated and won best outbreak player. Laurel was one of two players selected from the Broward area. Due to this accomplishment, he was ranked first in Florida in the outfielder category for the class of 2026 on Friday, Sept. 9. Not only is Laurel now first in class in Florida but is also ninth overall in the nation for the class of 2026.

Laurel started his baseball career at seven years old when his father signed him up for a little league team. Since then, he has been playing non-stop on multiple travel teams, including BID National, TBT, Florida Pokers and Fivestar. At the age of 14, Laurel had college and professional scouts interested in his performance knowing he has the potential to be something special in the future.

“I hope to work hard this season and continue to be recognized by college scouts,” Laurel said.

His love for baseball comes from his family, especially his father.

“I owe my success to my dad who pushes me to be a better player, train and work out,” Laurel said.

Laurel has dedicated his time to the sport, including his attendance at the tournaments and practices that gained his recognition.

“It feels pretty good to be where I am at right now because I know I worked for it,” Laurel said. “I am excited to see how the rest works out.”

Laurel not only owes his success to his family but to his coaches, who assisted in his athletic development throughout the years.

As a freshman, Laurel has made many achievements and is yet to show the MSD baseball program how he plays. He hopes to show his teammates, whether they be in his grade or older, and his new coaching staff that he belongs to playing consistently at a prominent level. He hopes to start getting some playing time on varsity this year and make a name for himself.

Laurel plans to keep working hard, ultimately succeeding with the Stoneman Douglas Eagles baseball program, an extremely hard program to get consistent playing time in due to the elite level they play at and the lofty standards Coach Todd Fitz-Gerald holds his players to.

Laurel hopes to play out an extensive career, like his highly touted status at Perfect Game predicts, and he has the talent to bring him there as he consistently works towards his dreams.