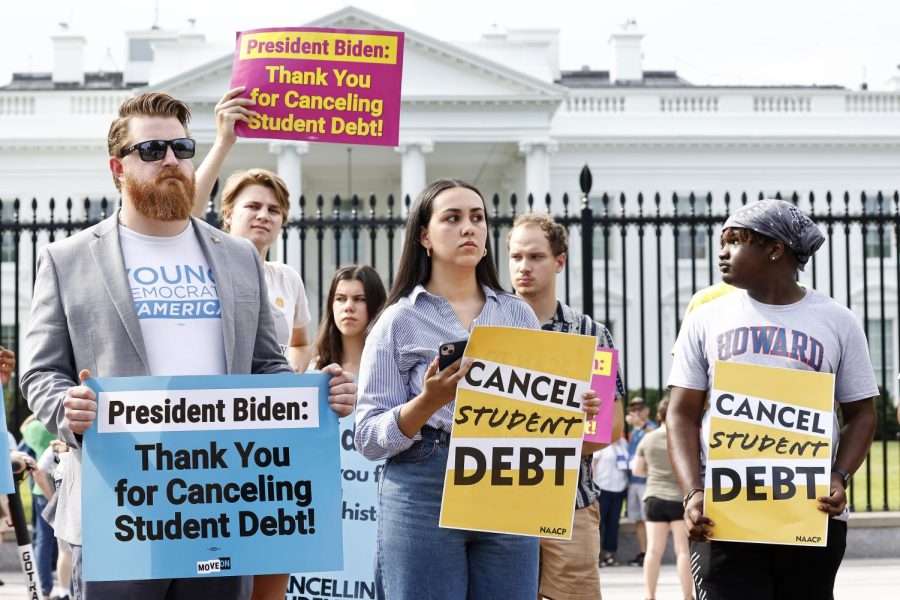 Student loan borrowers stage a rally in front of the White House to celebrate President Joe Biden cancelling student debt and to begin the fight to cancel any remaining debt, on Aug. 25, 2022, in Washington, D.C. Photo courtesy of Paul Morigi/TNS.

President Joe Biden gave many student loan borrowers relief on Wednesday, Aug. 24, when he announced that he would be canceling $10,000 in student loan debt for most borrowers, along with up to $20,000 for those who received Pell Grants, a form of financial aid for undergraduates from the federal government that doesn’t have to be repaid. The president’s plan would apply only to those making under $125,000 annually, and it would also cap repayment of undergraduate loans at 5% of one’s monthly income.

Both teachers and students at Marjory Stoneman Douglas High School hope to benefit from Biden’s plan.

“The people who will benefit the most is anyone with student loan debt, statistically minorities who are more likely to have more debt, because now you have more resources going into education, so everyone will be able to benefit, even if some of those people were already well off,” speech and debate teacher Jacob Abraham said. “So many who might still might be better off than average but still in some debt will be helped.”

There has also been debate around whether or not Biden’s plan would change how students value education.

“People who took out loans and didn’t finish college will probably benefit the most, but on the mortgage side I’ve seen people not be able to afford a home because of how much their monthly student loan payments take up,” personal finance teacher Michael Mauro said. “I see both sides of it, some people will feel frustrated that they’re paying for others’ education with their taxes, but others might be able to see if college is right for them, and for some people that could be life changing.”

Biden’s initiative has been largely supported by Democrats but heavily criticized by Republicans as being unfair and biased towards the wealthy and more educated.

“They keep throwing gas on the fire and so yesterday, they announce this thing to have the taxpayers pick up the student loans, which is going to fuel inflation,” Republican Governor Ron DeSantis said to a group of supporters in Tampa. “You are going to end up in a situation where you could have a truck driver be on the hook for a Ph.D. student who graduated in something like gender studies or something like that.”

Charlie Crist, Democrat nominee for governor of Florida, differs sharply from DeSantis, maintaining that under DeSantis, Florida has become unaffordable.

Although Rep. Val Demings, Democrat nominee for Rubio’s Senate seat, commented that it is still only a band aid solution to the student loan crisis, she has voiced support for Biden’s plan.

“Education is the ladder to the American Dream,” Demings said. “Today’s relief is targeted to the middle class, has new reforms to make it easier to work off loans, and will expand opportunity for everyone.”

Although there is still some uncertainty over whether the president’s plan will go into effect as Republicans are considering suing the administration in an attempt to block the plan, applications for student loan forgiveness open on Oct. 1 and can be found at StudentAid.gov.