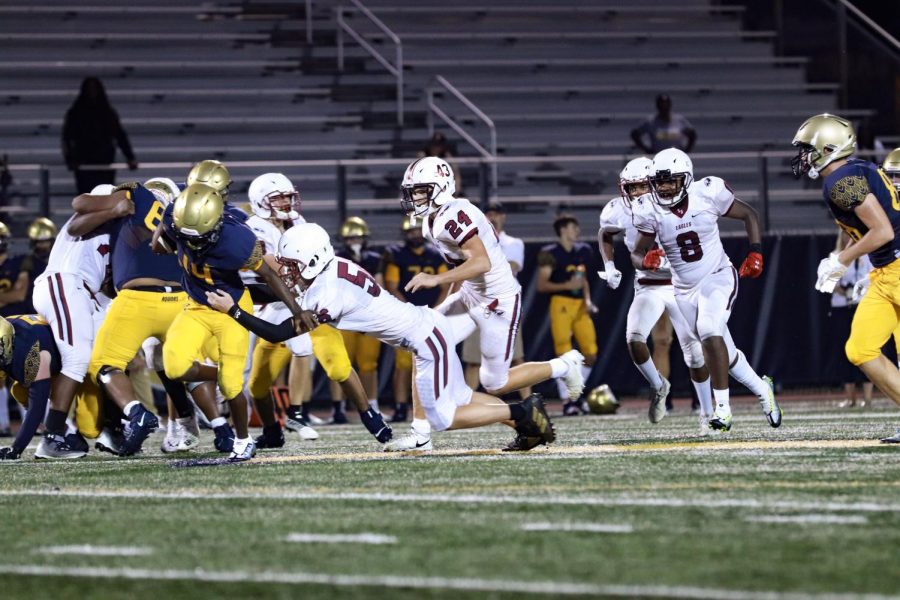 Saint Thomas Aquinas running back (14) is about to score a touchdown. MSD player Marshall Jaillet (56) attempts to tackle him.

On Wednesday, Sept. 14, the Marjory Stoneman Douglas junior varsity football team played against St. Thomas High, kicking off their first game of the season. The JV team played in Fort Lauderdale at the St. Thomas High football field. A tough matchup was expected, being that they were playing against one of the top programs in the country, and the Eagles ended up with a loss by a score of 22-42. The Eagles, being disappointed from their unfortunate loss, are hoping to make a comeback at their next upcoming game. As Marjory Stoneman Douglas JV football team prepares for this season, they are slowly coming back from a 1-2 overall record from last season.

With the team playing an away game as their first game, the MSD JV football team was on edge. They attempted to overcome their nerves but had a couple of ups and downs.

“It felt a lot different than I expected because this was our first real time experiencing a live team,” quarterback Jaxon Anger (18) said.

The Eagles carry on, working with determination and precision. Having their first game being rescheduled, the junior varsity team had almost little to no time to prepare strategies for their upcoming game.

As their game approached, JV football continued with their usual practices.

“We practice five days a week for three hours with a one hour weight lifting period,” safety Trey Francis (10) said.

The practices have been mostly at Marjory Stoneman Douglas on the football field, as well as the use of equipment in the weight room.

“Working on plays and helping everyone get experience and face game-like situations,” quarterback Joshua Espinosa (4) said.

The team plans to continue with these practices as they work throughout the season to perform to the best of their abilities to achieve number one for their division.

Having teammates being injured from recent practices, the JV team hopes to be able to recover quick enough to successfully start this new season. Defensive tackle Jonah Lenamon (54) was caught with an unfortunate hand injury during practice and is expected to play in future games furthur within the season.

Although the team may not have won their first game, they fought hard. Starting the game off with the first play, St. Thomas High scored one of the first points with a kick. The JV Eagles then resumed during the first half to score a point on safety with a following touchdown to end the half. The game began to get very tight with a score of 21-9. St. Thomas then was neck-and-neck with the Eagles during the second half but then the eagles scored another touchdown. Leading towards the end of the game the eagles started to lose their momentum and St. Thomas came back to end the game and take home the win.

“I would say our effort was outstanding and we were going up against one of the best programs in the nation.” Anger said.

The Eagles tried their hardest during the game and will continue to strive for a win in games to come. Their next game is scheduled for another away game on Wednesday, Sept. 21, against Nova High at 6:30 pm.