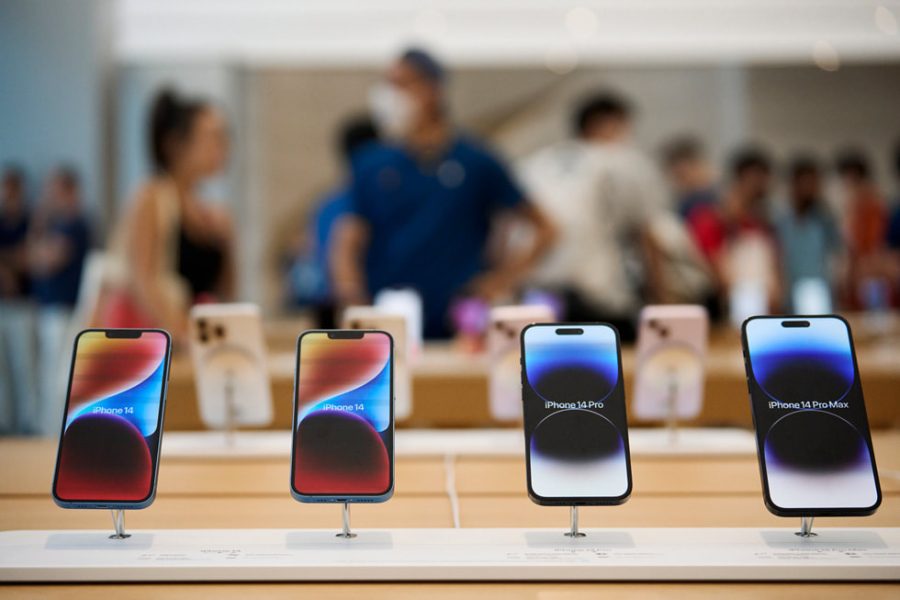 The iPhone 14 is a new, larger size, measuring at 6.7 inches.That is quite the difference from the typical 6.1 inch phones. This new device, coming out less than a year after its predecessor, has many features in common with the iPhone 13 and 13 Pro.

The new phone has a main and front TrueDepth camera. A TrueDepth camera captures accurate face data by projecting and analyzing thousands of invisible dots to create an in depth map of your face and also capture an infrared image of your face. For all the iPhone users out there, you have this camera to thank for the Face ID that makes your life much easier.

This new piece of tech also includes the A15 Bionic chip with a 5-core GPU, or Graphic Processing Unit. An A15 Bionic chip is a 64-bit ARM-based system on a chip. This chip allows for your phone to have an enhanced processing speed and a higher graphic power. With this chip, your phone will work faster and produce high quality graphics.

Another technological advantage of the iPhone 14 is its eSIM or “embedded sim card.” It’s an industry-standard technology that allows you to access your iPhone or add carriers digitally,” said Apple. Carriers are the cellular networks your phone connects to permanently such as Verizon, AT&T, or Boost.

The iPhone 14 also comes with highly innovative safety features. One feature being crash detection, which is a microphone programmed to detect the typical sounds of a car crash. If any of these sounds are detected and the user is unresponsive for a count of ten seconds, the phone dials for emergency services.

Another impressive safety feature is the Emergency SOS via satellite. This feature is a first for the cellphone industry. This system is designed to connect you to emergency personnel when traditional Wi-Fi and cellular services are not available.This feature allows for you to receive the help you need even in the most unreachable places. This feature has not been available in any of the previous iPhones.

It is clear that the creators of this new phone put a lot of thought into the safety of their users. Nevertheless, at $799 for 128GB and $899 for 256GB this device has a significant price increase compared to the iPhone 13. Reviews from current Apple users will determine if the new features are worth the price increase.

Sophomore Isis Smith who is currently using the iPhone 12, was extremely enthusiastic about the new safety features. As a new driver, they felt that “the Crash Detection feature is practical and a game changer for drivers’ safety.”

What sets this phone apart is not only its safety features and processing speed, but also its user convenience and look. This new device comes in five different colors including midnight, blue, starlight, purple, and red.

In addition to a wide range of colors, the phone also comes with the new iOS 16, which allows for a lock screen that is more personal than ever with a new multilayered effect. As well as, the front camera and speaker are now a small bar inside the screen. It also comes with many upgrades to some of the general apps that come with your iPhone. With Messages, users will now be able to edit or recall recently sent messages, and mark conversations as unread to visit them later. The improved iCloud Shared Photo Gallery makes it easier to share photos with friends and family.

All in all, the newest iPhone is one of convenience, safety and beauty. If you are looking for a personalized look or a safer phone for drivers, this phone is the way to go. If you haven’t already be sure to trade that old phone in for the new, sleek and safe iPhone 14.