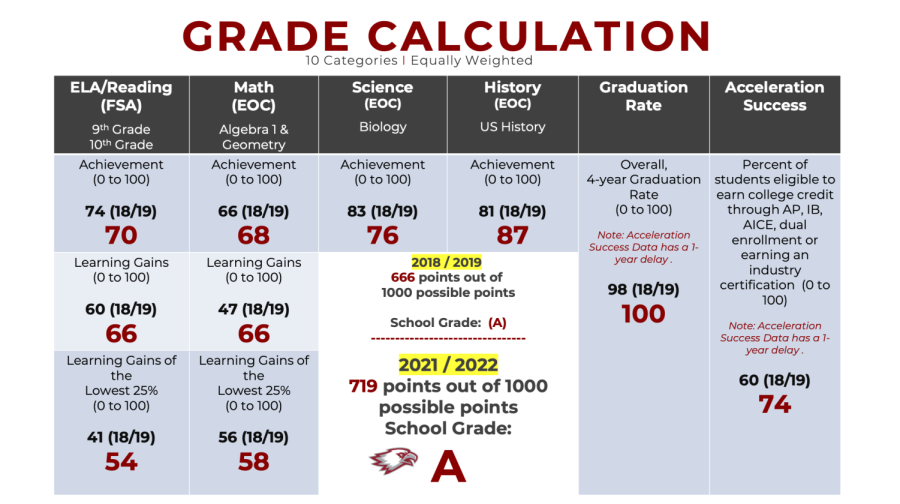 MSD is considered an “A” rated school in recent report, scoring a 719/1000 points. This is a slide in Principal Michelle Kefford’s presentation given at the SAC meeting.

School Advisory Council and School Advisory Forum (SAC/SAF) meetings are held monthly at Marjory Stoneman Douglas High School. It is a place for parents to give feedback on general topics affecting the school, express concerns for the school environment and present ideas to members of school administration and faculty.

The first SAC meeting at MSD took place on Wednesday, Sept. 14 in the media center. Parents, staff and students were all welcome to attend.

The agenda for this SAC meeting included a principal’s report- which usually occurs at the beginning of one of the one of the first SAC meeting of the year- approval of previous SAC meeting minutes, voting for parent and teacher slates, co-chair and secretary elections completed in May, positions for the 2022-23 year and by-laws.

Subjects usually discussed at these meetings include School Environmental Safety Incident Reporting (SESIR), which lists accounts of certain offenses and misbehaviors which occur on school campuses. Examples of these reports include drug or alcohol possession or use, fights, tobacco and physical attacks. An increase in incidents involving drug distribution and use was experienced after the homecoming dance held by MSD’s SGA on Sept. 10.

Along with these reports, the School Improvement Plan (SIP) was also reviewed. This plan provides ways to recognize essential needs at schools and ways to fulfill those needs at the school level.

Another subject matter is the School-wide Positive Behavior Plan (SPBP), which is part of the SIP along with the Office of School Performance and Accountability (OSPA). The SPBP was created as a way for schools to discuss certain mental, emotional and academic topics which MSD is included in.

Other topics brought to attention at SAC/SAF meetings cover MSD academic reports and the school’s ranking in subjects. A presentation was delivered by Principal Michelle Kefford discussing previous testing data acquired by the school between the 2018-19 school year and now.

MSD’s rating is currently an “A”. It has maintained that rating since the 2018-19 school year. However, due to the shooting that occured at MSD on Feb. 14, 2018, and the subsequent pandemic, no school rating was given the past few school years due to insufficient testing data. This score is determined based on cumulative results from standardized tests distributed to students throughout a certain school year.

In Advanced Placement testing, just over 75% of students got at least a score of 3 or above on AP exams. This includes classes such as AP World History, AP Human Geography and AP U.S. History.

“I’m very happy that 84% of my students passed the AP exam, which is 32% higher than the national average,” AP World History teacher Devin Schaller said. “I made sure that my expectations were very clearly laid out at the beginning of the year so I could know where the learning gaps were, even for kids coming from an AP Human Geography class to my class.”

MSD’s bell schedule changes were briefly brought up at the SAC meeting, explaining the shortened passing time to 6 minutes to allow 92 minutes per class period, as well as the reduced Professional Study Days (PSD) on this school year’s calendar.

A school-wide initiative is being addressed every month, using “The 7 Habits of Highly Effective Teens” by Sean Covey. September’s habit is to be proactive, which encompasses choosing your own decisions and being in control of your personal life.

F.A.S.T. assessments for ELA following the state of Florida’s B.E.S.T. standards were given to students at MSD in their English classes on Aug. 30-31. These tests will be taken by students three times a year to assess their reading comprehension skills.

After results from EOC testing taken from the 2021-22 school year, MSD administration made the decision to offer a double block Geometry class, where students are able to take two math classes of the subject on both Silver and Burgundy days. Previously, only a double block Algebra 1 class was available for students to have as a course.

A tentative upcoming testing calendar was also presented to confirm preliminary dates throughout the school year.

Staff members presented proposals to the committee, asking for funds to be approved for certain classroom needs including textbooks and licenses for online math programs.

SAF Representative Elisha Johnson provides a report at each meeting. Past reports have comprised of Broward County surveys, referendum renewals, school board member meetings and bus rider registration for the current school year.

A new business section of the meetings opens the floor to faculty, students and parents to bring topics for questions, comments and concerns to.

Upcoming matters to be discussed at future meetings include PSD waivers and the annual Day Of Service to commemorate the 17 lives lost in the Feb. 14, 2018 tragedy.