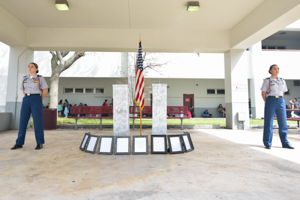 When school resumed, administration sought out Rho Kappa in order to brainstorm a 9/11 memorial to remind the students to never forget the tragedy.

Located in the center of the courtyard on Fri. Sept. 22, the memorial consists of a silver-painted, wooden three-dimensional model of the World Trade Center created by a local, independent carpenter, Carlos Vale. Frames surround the base, encasing the names of all the 9/11 victims with a message that reads “[t]his memorial is dedicated to all of the brave men, women and children, who lost their lives on September 11th, 2001. We thank them for their courage and valor. May their souls rest in peace forever.”

Rho Kappa teamed up with Junior Reserve Officers’ Training Corps (JROTC) in order to have an honor guard protect the display. Standing at attention or in parade, two JROTC members bordered the exhibit throughout the day.

“[9/11] reminds us that we’re part of a global community, both in a positive and negative way,” Rho Kappa advisor Ray Posada said.

The central location of the memorial attracted students to observe the display and encouraged them to take a moment of silence in honor of the victims of the 9/11 terror attack.

“It wasn’t just about the attack, it was about the unity and understanding that occurred after it,” Posada said.

As the world becomes increasingly interconnected, the memory of 9/11 reinforces the necessity of understanding and tolerance while proving the irreversibility of violence.