DACA was only a temporary fix 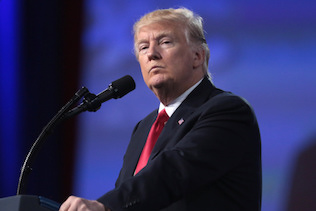 President Trump has a decision to make regarding DACA

Since President Donald Trump vowed to end the Deferred Action for Childhood Arrivals (DACA) program, a system devised by the Obama administration to protect immigrant youth from deportation, an outcry of protest has spread across the country.

Most of these protests, including one organized by the Court Appointed Special Advocate Association (CASA) in front of the White House earlier this month, have been made to prevent Trump from repealing DACA and instead make the program a permanent fixture in the United States immigration law.

A common theme that has emerged in the campaign for DACA is sympathy which has then been heightened by the media. People are so focused on the pictures of children who were smuggled illegally into the country by their parents, that they fail to comprehend the real life effects of granting amnesty to people who are ultimately criminals in the eyes of the law.

This context can be best exemplified by the analogy of the Super Bowl. The Super Bowl is one of the most important sporting events in the U.S. and, as such, tickets are difficult to get a hold of.  A family is not able to acquire a ticket and instead chooses to sneak into the game. They make it into the stadium as the game kicks off but cannot find seats.

They have to push past people in order to get a good view of the game and end up watching from the stairwells. Then a security guard walks up to the family and asks where their seats are. The father nervously admits that he does not have one. The guard rolls his eyes and throws the parents out of the stadium, but leaves their children behind.  Surely if the parents are forced to leave, shouldn’t the children be too?

Unfortunately, the United States’ current stance on immigration mirrors the situation described all too well in regards to the DACA program. When the Obama administration rolled out the program, they only intended it to be a temporary fix.

“Let us be clear; this is not amnesty, this is not immunity, this is not a path to citizenship,” former President Barrack Obama said in a speech at the White House. “It’s not a permanent fix. This is a temporary stopgap measure that lets us focus our resources wisely while giving a degree of relief and hope to talented, driven, patriotic young people.”

If even the administration that put it into effect knew that it would need to be revised or removed, then surely it serves as an indication that change is necessary for the program. One of the biggest problems to changing the system, however, is that the course Democrats want to take, including Sen. Chuck Schumer and Rep. Nancy Pelosi, is to embed DACA into law and continue to grant amnesty.

“We agreed to enshrine the protections of DACA into law quickly and to work out a package of border security, excluding the wall, that’s acceptable to both sides,” Schumer and Pelosi said in a joint-statement.

It seems like a nice idea on the surface to put into law that immigrant children in the U.S. will be protected, but that is before you analyze exactly what granting amnesty means. By legalizing almost a million new residents, there is no question that such an act would set off a chain reaction—one that would not stop until all of the 11.3 million illegal immigrants in the U.S., estimated by the Pew Research Centre in 2016, have been granted safety from deportation as a result of the current immigration laws that allow residents to bring in family members.

All of a sudden laws on chain migration will allow the families of those protected by DACA to enter the country. The same people that broke the law would then be rewarded for it. It would be the largest amnesty grant in the history of the U.S., making a mockery of the Constitution and American law as a whole. If millions of people who are, in essence, criminals are absolved of their crimes then what is to stop other unpopular laws from being subjected to the same scrutiny of immigration laws?

Sen. Tom Cotton from Arkansas warned about the potential damage from mass immigration after the codifying of DACA into law.

“The very first people that would be eligible are the parents of the DACA recipients, which is to say the very people who broke the law by bringing their kids here,” Cotten said. “[DACA] could be the largest amnesty in the history of the United States.”

The most significant dangers posed by DACA are not the short term issues, but the long term ones. The U.S. needs to stop dealing with immigration the way they did under the Obama administration, which merely created temporary solutions without facing the problem. People cannot change what they refuse to confront, and it is my hope that under the Trump administration prompt and effective action will be taken to change the immigration system for the better.

My thoughts do not stem from a hatred toward immigration, but rather from a prioritization of the welfare of the American public. There is nothing fair or legal in what Schumer and Pelosi are aiming to achieve by codifying DACA into law, and it is up to the American people to decide what they value more: being nice or being fair.

I have nothing against immigrants, in fact I am one. I traveled here eight years ago with my parents, who still believed in the “American dream” and had hopes of making a better life for my brother and me. They truly believed that the U.S. was the last place on Earth where men and women, through their own sweat and ingenuity, could be anything that they wanted to be. I will be forever thankful to my parents for allowing me the opportunity to pursue my hopes and dreams in the land of the free. But, more importantly, I am also proud that they came here fairly and legally under the law and I plead with anyone reading this to consider that before they conclude on their opinion in regards to DACA.