Why you should double-check before donating 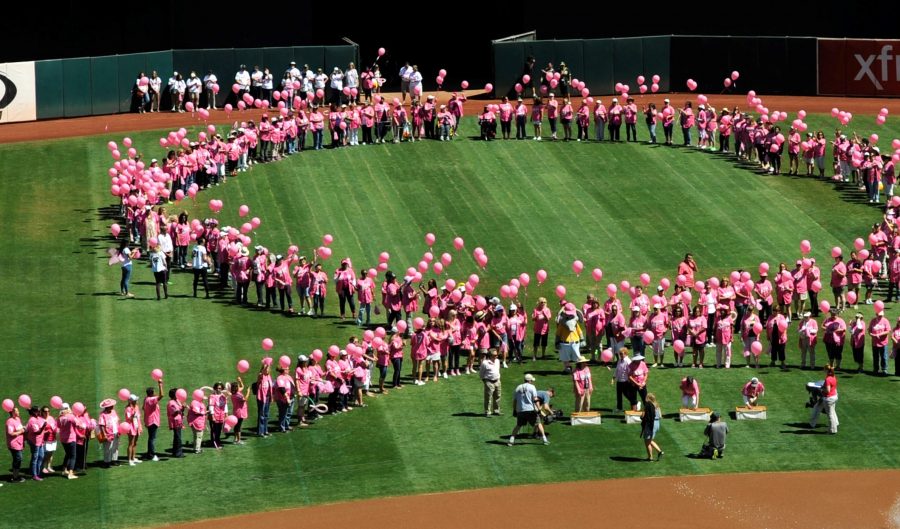 More than 350 Bay Area breast cancer survivors form a symbolic human pink ribbon on the field before the Oakland Athletics take on the Seattle Mariners at O.co Coliseum in Oakland, Calif., on Sunday, Sept. 6, 2015. The event was part of the 17th annual Oakland A's Breast Cancer Awareness Day. The A's announced that more than $75,000 was raised. (Susan Tripp Pollard/Bay Area News Group/TNS)

October is Breast Cancer Awareness Month—a month dedicated to fighting the most common cancer detected in women. According to the Mayo Clinic, death rates for breast cancer have been declining in recent years due to increased awareness, earlier detection and more funding for research. While no cure yet exists, breast cancer is treated through surgery and extensive chemotherapy and radiation, like many other cancers.

Susan G. Komen for the Cure, one of the largest foundations for breast cancer awareness in America, has been accused of only using 21 percent of its funds for cancer research and spending the rest on advertising. Critics have spawned the term “pinkwashing,” referring to the organization’s commercialization of the pink ribbon and its seemingly counterproductive promotions, such as selling perfumes with cancer-causing chemicals in them. In addition, the Komen organization has been known to pursue legal action against smaller nonprofits that use the phrase “for the cure” in their promotion.

Another example of misplaced donations is Locks of Love, an organization that claims to use donated hair to make wigs and hairpieces for people who have lost their hair through chemotherapy and radiation treatments. According to Forbes magazine, Locks of Love uses as much as 17 times more hair donations to make one hairpiece than other companies with the same objective, like Pantene Beautiful Lengths.

A notable case in fraudulent charities is that of the Cancer Fund of America, which was ordered to shut down by the Federal Trade Commission after it was uncovered that most funds did not go to treatment or research and instead were allocated to personal expenses by those working in the charity. The Cancer Fund of America has since been dissolved.

Before donating to any charity, make sure to investigate the organization and any previous controversy or scandal involving it. Charity “watchdogs” like Charity Navigator, CharityWatch and  Better Business Bureau Wise Giving Alliance grade and rate many charities by considering a number of factors like expenses, allocation of funds and transparency.

According to Consumer Reports, two of the highest-rated cancer charities are the Breast Cancer Research Foundation and the Cancer Research Institute, both based in New York. For donating hair, consider Pantene Beautiful Lengths or Wigs for Kids.

Before donning pink ribbons this October, take the time to ensure that a donation of good will will not end up in the pockets of corporate executives. By making sure that all funds possible are going to research, the cure will be one step closer.