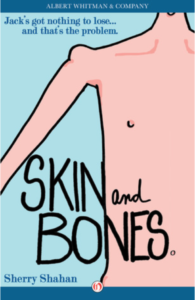 The story takes place in Los Angeles, California at a hospital eating disorder unit (EDU). It exhibits a coming of age journey through its characters by using the setting Shahan has created for them.

The main characters are all patients in the eating disorder program who are trying to repair their illness while developing bonds along the way. The main character, Jack Plumb, better known as “Bones,” is admitted when the effects of his anorexia begin to control his life, and he is no longer able to function like a normal teenager. Contradictory to Bones, his roommate in the hospital was diagnosed with binge eating disorder.

Bones’s roommate, David Kowlesky, also known as “Lard,” has been in the program longer and is pursuing his life-long dream of becoming a chef. Lard knows the EDU well considering how long he has been a patient.

Another main character, Alice Graham, is an anorexia patient who has been in and out of the program, but she can never stay away for long before turning back to her old ways. She dreams of becoming a dancer, the one thing she strives for in life. This passion is what makes her need to be skinny so strong because ballet dancers are traditionally very thin and graceful.

Bones fell in love with Alice the moment he met her. Throughout the book, Alice uses Bones’s love for her to compel him into doing deeds that that harm not only his recovery, but also hers. The author used a toxic relationship as an example of how a bad friend can affect someone’s life in such a negative way during their healing process.

Shahan gives the book a lively feeling of a real friendship. As a reader, I felt like I traveled with the group of friends to their hideouts in the hospital and became included in the inside jokes they share.

Shahan provides insight on life when admitted into such programs. She includes therapy sessions, group meetings and family visits to personalize the message of the story.

When publishing this story Shahan did not only focus on anorexia, she also displayed a realistic human experience of these innocent teens during their painful process of recovery.

For readers struggling with an eating disorder themselves, Shahan included a page full of help sites and numbers, as well as statistics about eating disorders.

“Skin and Bones” is rated four and a half stars on Amazon and received stellar reviews from Booklist, Bulletin of the Center for Children’s Books, Kirkus Reviews and many more.

Anorexia remains a huge issue in society, especially among youth. Works like “Skin and Bones” help to increase recognition in the matter through fictional literature.