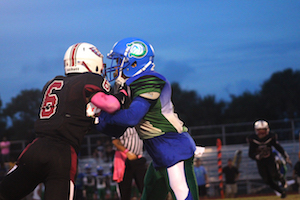 Latrell Sam-German (6) faces off against Coral Spring High at the 2017 Pig Bowl. Photo by Emma Dowd

The men’s varsity football team storm out of the tunnel to a deafening home crowd, ready to destroy anything and everything in their path. Looking for their third straight victory against bitter rival Coral Springs, they take the field with an insatiable thirst for that goal. With all the confidence in the world and a rowdy crowd behind him, Tyler Goodman (1) drops back and unleashes a deep pass on his second throw of the game, only to watch it land in the waiting arms of Colts defensive back David Brown (7) for an interception.

The air is sucked out of the lungs of the packed Eagles stands. In just a few moments, the Eagles bleachers went from deafening screams to an absolute silence. After an uneventful Colts drive ended in a quick punt, Goodman led the offense back onto the field.

When asked about the early interception, Goodman said, “As a quarterback you just have to forget about it, and keep that play in the past.”

Goodman did exactly that, leading a scoring drive that was capped off by a 23-yard rushing touchdown by Robby Rodriguez (20).

“One of the keys to football is to always focus on the next play,” said Goodman. “If you let one mistake take over your mind, you’re done mentally.”

It wasn’t pretty, but the Eagles did just enough to grind out an 18-8 victory against the Coral Springs Colts at Cumber Stadium, marking their third straight Pig Bowl win.

“It was by no means perfect on our part,” said Eagles head coach Willis May.

A successful two-point conversion put the Eagles ahead by a score of 8-0, extending their early lead.

After a few quiet drives, the Colts answered with a 61-yard touchdown run from Michael Jarrett (15). The Colts converted a successful two-point conversion of their own on a rush by Delvontae Bouie (6), tying the game at 8-8.

Aside from that 61-yard rush, the Eagles defense had an amazing performance on the gridiron, much to the appreciation of Coach May.

“We did an outstanding job defensively,” said May. “They had 137 total yards and 61 of those came on one play, I thought we did a better job of getting to the football.”

The Eagles passing game struggled once again. With three interceptions and zero passing touchdowns, the air attack of the Eagles has been non existent without star wide receiver Tai Lehtio (88) in the mix.

The Eagles offense was anchored by the run game as Christian Alcocer (7) scored a 31-yard touchdown run in the third quarter. This score gave the Eagles a 15-7 lead. With a 4th quarter field goal, the Eagles clinched their victory.

It was a full house at Cumber Stadium, the stands were filled to the brim, something the players were very appreciative of.

“It feels great to beat a rival at home, and when you have the noise from the crowd behind you it brings even more excitement to the game,” said Goodman. “It definitely helped out with the victory.”

Of course, a third straight Pig Bowl victory marks the third consecutive year that Stoneman Douglas principal Ty Thompson did not have to kiss a pig.

“I’m extremely excited about the win tonight. It was a team effort from the football team, cheerleaders, Eagle Regiment, and the fans,”  said Principal Thompson. “I’m very happy that I have not had to kiss the pig for 3 years now; that’s thanks to all the people mentioned!”

The Eagles (2-2) will look for their third straight victory of the season on Friday, Oct. 14th when the Deerfield Beach Bucks (3-2) come to town for a 7:00 matchup in Cumber Stadium.