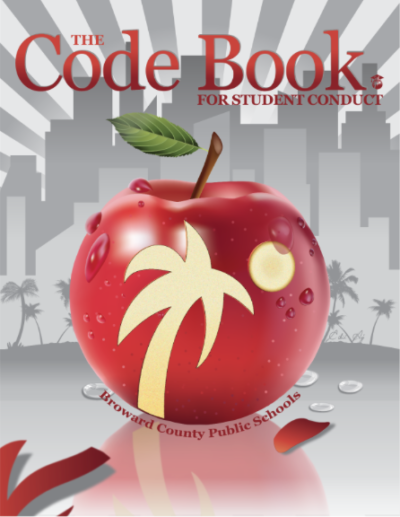 The Broward County code book holds the specific rules for dress code and student behavior, and is mandatory for students and parents to review at the beginning of each school year. Photo courtesy of Broward County Public Schools

High school prepares students for their future by encouraging acceptable learning techniques, attire and conduct. However, sometimes schools take it a little too far with dress codes, suppressing students from being themselves or dressing the way they want.

Administration uses the word “distracting” when addressing shoulders, showing off belly buttons and wearing short shorts, but teachers only are strict with shoulders, while there are girls doing the other two. Therefore, if that is permitted, then why shoulders should not?

How are shoulders distracting? That is what many females at Marjory Stoneman Douglas ask themselves everyday. Shorts should have a minimum length of mid-thigh, but girls wearing revealing shorts is often seen around school, and no one says anything to them. However, if a girl shows her shoulders, all teachers send her to Student Affairs, but if a boy wears a tank top, nothing is said.

The message that is being sent is that boys are exempted from this rule, but girls are not. There are boys walking around campus shirtless at times and nothing is being said. Shoulders are not inappropriate, nor do they exhibit violence, therefore there should not be any problems with them.

Whether shoulders are distracting or not depends on the person, and if boys get “distracted” by our shoulders, they should control themselves. Instead of body shaming girls and sexualizing shoulders, they should teach boys the correct behavior.
In a CNN article, a parent talked about how dress code had been affecting her daughter. She said that her 13 year old daughter had been told by a teacher that she could not wear yoga pants because the boys would get turned on and then be embarrassed. Schools should be teaching young male students how to handle these situations rather than restraining the innocent female students who are simply dressing accordingly for the weather and modern style trends.

There is no reason why females should cover themselves just because it can distract others. They just want to feel comfortable considering how early school starts and the weather outside.

Due to the hot, humid climate experience here in South Florida, it is unreasonable for students to be required to trap themselves in thick jeans and long sleeves when it is 90 degrees outside. This is especially pertinent for those students who walk to school, to the junior parking lot or even eat lunch outdoors, which comprises a large portion of the student body.

Some of these regulations are unnecessary. If someone does not want to pay attention in school they simply won’t, what they wear should not be targeted as the reason.

Everyone should be able to express themselves through the way they dress regardless their gender. However, if students dressing the way they prefer is distracting to anyone, they should learn how to control it.

All students should be able to dress comfortably for school and engage in the educational environment without fear of unnecessary discipline or body shaming. Making girls have to cover up parts of their body like shoulders can cause body shaming, and letting boys do so freely just shows that dress codes are sexist.

Girls want to go to school and learn without worrying if what they are wearing is distracting boys or not. However, they are preoccupied about if they show their shoulders or not due to body shaming, which is what the school dress code is causing. It is understandable the why chests have to be covered, but shoulders having to be covered just gives the wrong message.

Some say that this is a learning environment and that dress codes regulations should be applied for a more focused student body, but, if this was the case, the rules would be applied equally. The regulations would not only be enforced for girls, they would be for all of them.

Moreover, these rules do not allow students to wear what they want, which is suppressing their freedom of expression. This situation contributes to a growing negative attitude toward going to school, which has become commonplace among American students. Outdated dress codes, along with harsh penalties such as internal suspension, are not only counterintuitive to the fundamental purpose of education, but also reinforce a patriarchal attitude in modern schools.