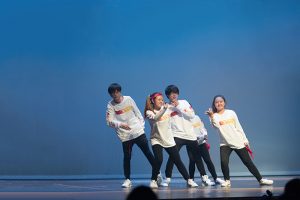 Despite the long lines to purchase tickets and the show’s late start at 7 p.m. when it was scheduled to begin at 6 p.m., hundreds of people attended the show, eager to see the diverse performances of their peers or children.

Interest in the show was high among students and parents alike, as the auditorium was filled to its maximum capacity of 864 people with even more people standing against the walls for the entire length of the performance.

“I really enjoyed the multicultural show because I could just tell that everyone who participated really loved what they were doing, and the dances were really entertaining,” junior Charlotte Dwyer said. “The show allowed people to embrace different cultures, which was so nice to see.”

Not only do the performances serve to evoke national pride and entertain its audience, but also to bring together a cast of multifaceted students with an appreciation for the world and its cultures.

“It’s my senior year, and doing the show with the people that I’ve grown with and gotten to know these past four years will be unforgettable,” Spanish Club president Diana Estrada said.

The student-led showcase took three months to choreograph and organize by the Spanish Club officers who began their progress in September. In addition, other organizations at the school take part in the production such as the Bollywood team, French Club, Haiti team, Jamaica team and step team.

No show is complete without its set and lighting; the artistic director Daniel Williams and the lighting director Adam Alhanti rounded off the production crew.

The showcase began with a poem from the Spoken Word Club entitled “Fireworks.”

Performed by sophomore Jorge Garrido, sophomore Anna Bayuk and junior Sara Giovanello, the poem spoke of tolerance among all cultures and its presence during the firework displays at Epcot theme park.

The show continued with a moment of silence in honor of countries currently in distress such as Mexico, Venezuela and Puerto Rico.

The dances were performed by the region they were from, starting with North America, Europe, Asia, Africa, Latin America and the Caribbean. The actors Alex Martinez, Ariana Lopez, Brian Martinez and Nicole Catania performed a skit to introduce each region’s section of dances in which the four pretended to be a family wandering around the attractions at the Epcot theme park.

At intermission, Franchesca Brunnetti sang “Imagine” by John Lennon with some of the lines translated into Spanish, reinforcing the showcase message of unity.

“While several different cultures are being displayed, music has a way of bringing everyone together, and that is the best part of our show,” Estrada said.

Many dances remained consistent with last year’s showcase, although some changes to the 2017-2018 lineup occurred. The lineup annexed several new cultures from destinations around the world such as Korea (K-pop), Germany (waltz), Egypt (bellydance), the Bahamas (soca and whine) and Hawaii (Hawaiian dance).

“I’m so excited for this year’s show because we have incorporated many more dances from around the world,” choreographer Oriana Rivas said.

In particular, the Korea dance modeled the choreography of the songs “Lie” and “Fire” by Beyond The Scene, a South Korean boy band. Familiar with the choreography, junior Alex Han assumed leadership for the dance.

“What makes me most excited is that because it will be the first time Douglas ever sees a K-pop dance at the multicultural show this year, I’m eager to see what kind of reactions will arise,” Han said prior to the performance.

While the production introduced new performances, the Chinese lion dance that has performed in the multicultural show in the past did not make a reappearance, disappointing some of the students. The audience was not alone, as dance coordinator Carmen Lo was also saddened by its absence from the show.

“This year, I was supposed to be the dance choreographer, [but] we unfortunately were unable to get the lion costumes for the dance,” Lo said.

Through the rallying of national pride and the exposure to an increased level of diversity, the Epcot Multicultural Showcase shared not only the heterogeneity of the many students at MSD, but also united those cultures under the umbrella of one world.

In a world where division has become so highly emphasized, gatherings like these prove that, deep down, we are the united people inhabiting the same world.