MSD mourns the loss of students and teachers at candlelight vigil 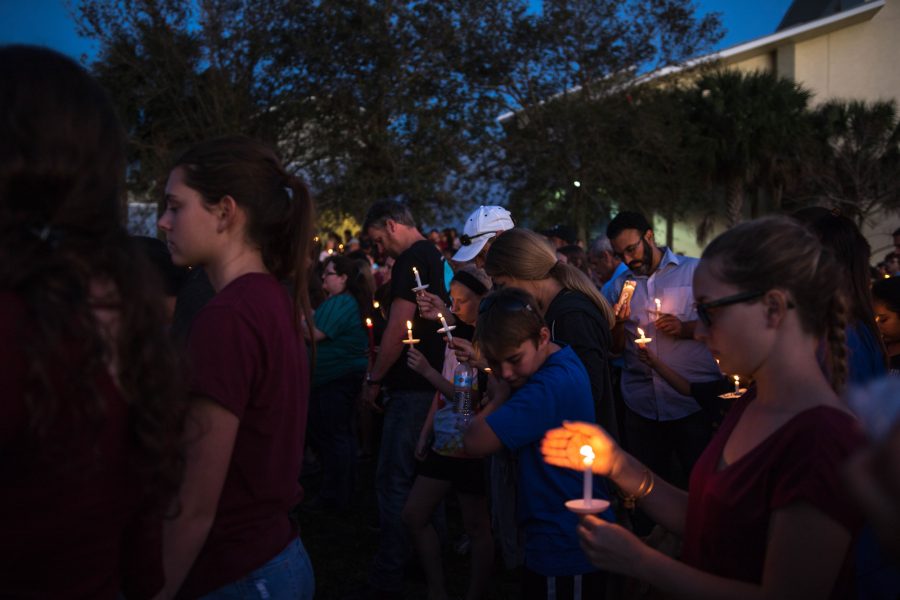 Students, teachers and families alike came to the sunset vigil to remember those directly affected by the shooting. Photo by Delaney Tarr

*Story is co-written by Nikhita Nookala and Christy Ma*

After the tragic events of Feb. 14, students spread the word through social media that there would be a candlelight vigil held at 2:30 p.m. in Pine Trails Park. Traffic on major Parkland roads such as Holmberg Road and Coral Ridge Drive was completely backed up, causing many to spend over 45 minutes on what used to be an uneventful 10 minute drive.

Starting from 2 p.m., the parking lot was completely filled as students reunited with each other, some for the first time since the shooting. Some students, like College Academy senior Remi Work, who has not attended MSD in two years, came anyway to support their friends.

“[I came] because I was a Douglas student and I knew many of the victims,” Work said. “Calling my mom 30 times after passing Douglas on the highway thinking she was dead was the scariest moment of my life. Even if I wasn’t as personally affected, everyone should try to be there for the people that were.”

Organizers from the Red Cross passed out blankets and Mickey Mouse plush dolls to students. On the stage, 17 angel

figurines were set up to honor each of the victims. The space in front of the amphitheater was also dotted with crosses for each victim.

The City of Parkland sponsored the official sunset vigil at 6 p.m. on Thursday. Speakers from the community as well as religious leaders from various groups were present. Speakers included Parkland Mayor Christine Hunschofsky, City Commissioner Ken Cutler, Sheriff Scott Israel and Fred Guttenberg, the father of freshman Jaime Guttenberg, who passed away on Feb. 14.

The city provided candles for attendees to light during the vigil in order to spread brightness into a field of darkness, symbolic of the community’s unity and light in the midst of trials and tribulations. The community raised their candles at the end of speeches, in remembrance of the 17 victims.

Media choppers continued to hover over the park, making some of the speeches inaudible. Media presence at the event all day was overwhelming, with some students reporting that they had even been approached for interviews or quotes.

“I think the media is doing a good job on taking the appropriate steps to being insensitive,” senior Daniel Williams said. “But there are multiple instances where journalists are writing things that are exaggerated or just straight up false, which makes us students mad.”

As speeches continued to come from the amphitheater, the cries and messages of support coming from the crowd were interspersed with messages of gun violence. Some chanted “Arm the schools,” while the audience retaliated with “No more guns.” Students caught in between could do nothing but cry and hold on to friends and family.

The event concluded with hundreds of people trying to exit the park area, which resulted in an immense traffic jam. However, police and local law enforcement were vigilant and very present around the area, allowing the evening to go by without major incident.