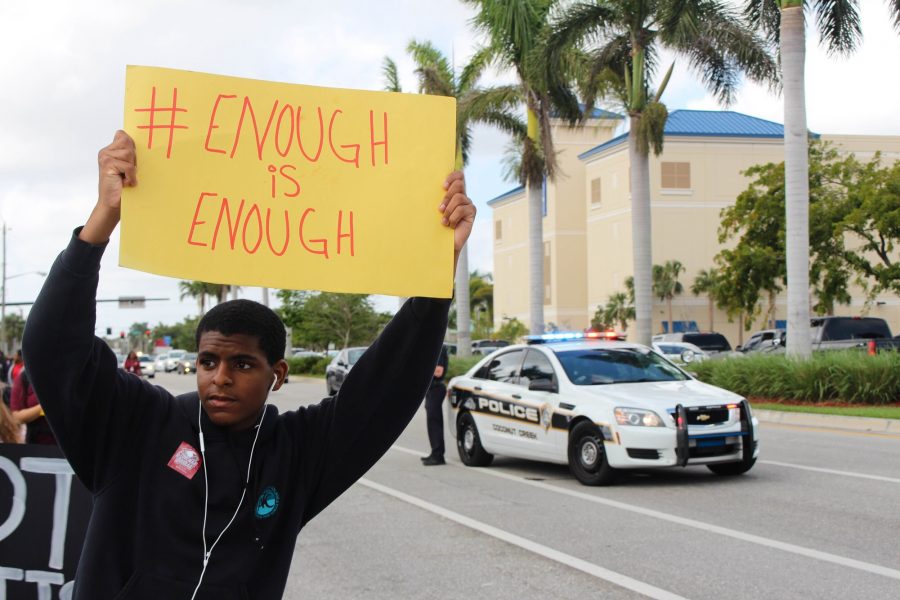 In the wake of the shooting at Marjory Stoneman Douglas High School, many schools in Broward County and other surrounding areas have taken it upon themselves to organize walkouts and other events to support both the #NeverAgain movement and the MSD student body.

On Tuesday, Feb. 20, students from West Boca Community High School in Boca Raton walked the 12 miles from their school to MSD, to be welcomed by a crowd of students. Some students were dehydrated and all of them were exhausted. However, they were there to make a statement. Their lives were worth more than NRA blood money.

While many schools are in favor of supporting their students’ right to free speech and protest, some schools around the nation, like Needville High School in Texas, are threatening to punish students if they disrupt classes by participating in a walkout.

The sight of the schools gathering at the border of MSD campus was a powerful one to watch. Chanting slogans such as “Lives Over Guns” and “Douglas Strong,” protesters effectively blocked traffic on the intersection of Holmberg Road and Pine Island Road during the time of their arrival. On Wednesday in particular, hundreds crowded in front of MSD. The group from West Boca also shut down parts of Loxahatchee Road on their journey down to campus.

For the students of MSD, like senior Aly Sheehy, the support of other students meant a lot.

“It was amazing, I have no words to describe how proud I am of our community,” Sheehy said. “The support we have is amazing and it kind of showed me that we can change this, that the students were not going to let this movement die.”

As the Parkland community recovers from the tragedy of Feb. 14, the support of fellow students keeps the MSD student body hopeful, hopeful that their words are not being thrown into the air unheard. Their support is living proof that this movement is resonating with the next generation. Change is coming, one walkout at a time.