Ernie Rospierski shields his students from the line of fire 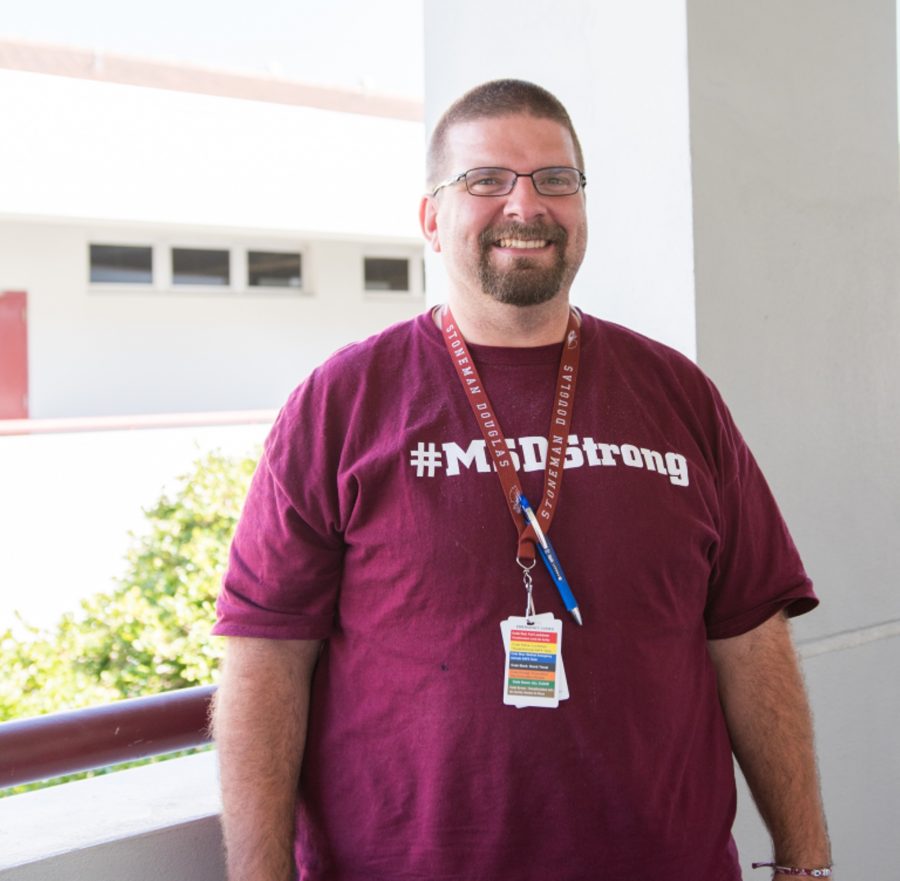 On Feb. 14, 2018, social studies teacher Ernie Rospierski was on the third floor of the freshman building in room 1249 when the fire alarm went off. His students began following procedure by packing their things and evacuating the room. As Rospierski reached the top of the stairs, he immediately recognized the sound of gunshots.

All the students in the stairwell began running back up the stairs, and Rospierski waited at the end of the hallway drawing as many kids as he could into classrooms to take cover. He walked behind the students, yelling loudly for them to reach safety and tried to get them into a room.

By the time Rospierski got back to his classroom door, the shooter had gone up the stairs and reached the end of the hallway. Upon seeing the shooter, Rospierski was unable to identify him because his face was covered by a gas mask and a vest.

“At the time I didn’t realize it was an active shooter, I thought it was the code red drill that we had been worried about,” Rospierski said. “That’s what I assumed it was, so i was trying to make sure our kids were going to the safest places they could. I wasn’t worried about me at the time.”

Rospierski finally came to terms with what was happening when one of his former students was shot and fell behind him. With students from his class still in the hallway, Rospierski frantically grabbed as many students as possible and put them into the alcove by his door to hide away from the bullets.

The shooter then started aiming at Rospierski, grazing him on the cheek and hip. After another four or five shots, there was suddenly silence. Rospierski peeked his head out to get sight of the shooter and saw that the shooter was fiddling with the weapon.

Recognizing the chance that this small window of time offered him, Rospierski told his kids to run towards the left stairwell and he followed behind them. He attempted covering as many kids as possible until they had all reached the stairwell.

After trying to pry the door open several times but to no avail due to Rospierski’s strength and determination to protect his students, the shooter finally gave up. No more students were injured as a result of Rospierski’s bravery.

“[The shooter] decided to push against the door and try and get through, but he couldn’t get through because my foot was there,” Rospierski said. “After that, I waited ‘one thousand one, one thousand two, one thousand three’ until he stopped trying to get through the door, and then I took down the stairs, to find my own form of hiding hole.”

The students who ran down the west stairwell were taken by a SWAT team when they reached the bottom of the building. Rospierski only knew that his students got outside at the time, but was later informed that they had been escorted by a SWAT team.

Three of Rospierski’s students were killed and another was injured. He explains that although he is processing it well, he will never feel the same again.

“I don’t think myself as anything besides just a normal person doing what they could to help others. That’s what I think anyone would do in that situation,” Rospierski said. “It’s not just my job, I expect any of my peers, people that I like, people who are my friends, to react the same way. And it’s not about being a hero, it’s about doing what’s right… it’s not listed in the job requirements, it’s something we just do.”

Trying to cope with the terrible tragedy and stay in a good headspace, Rospierski has been talking to people including friends and professionals. The support of his family, especially his wife, English and AP seminar teacher Andrea Kowalski-Rospierski, has become key for Rospierski adapting back into his previous norm.

Acts like Rospierski’s are what saved numerous lives at Marjory Stoneman Douglas High School on Valentine’s Day of 2018. He and many other staff and students are the reason many students returned to their families on that day. The students of MSD are beyond grateful for these people and their strong and extraordinary acts.