JROTC students help shield others behind Kevlar sheets inside classroom 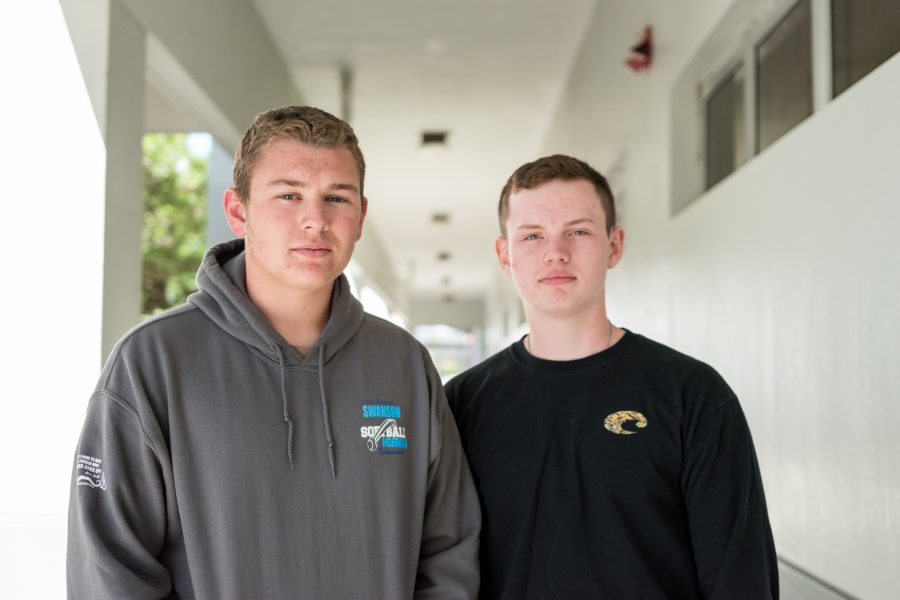 On Feb. 14, Marjory Stoneman Douglas High School and all its family were affected by a senseless massacre that ended with the deaths of 17 students and teachers. On that day, many students, faculty and teachers reacted in a variety of a different ways, with stories of heroism and selflessness arising from the dark day. Two students who acted amidst the shooting were JROTC Capt. Colton Haab and Capt. Zackary Walls, ordinary people who relied on their wits and environment to protect themselves and others.

As shots rang out, Haab and Walls helped guide 60 to 70 students into a JROTC classroom. While inside, they shielded students inside with Kevlar sheets in order to help slow bullets in case the shooter came to their classroom.

“Zackary Walls, myself and another JROTC student moved Kevlar sheets in front of everyone,” Haab said. “The reason we did so was not only to give cover, but to also give the kids a sense of security and creating less visibility of the entire classroom as well as the people inside.”

Kevlar is a strong material commonly used in bulletproof vests. The sheets inside the classroom were used as a backdrop for JROTC marksmanship practice. These sheets luckily were never needed to protect from the shooter. Nevertheless, being prepared could be the difference between life and death. If the shooter did happen to  enter the classroom, the students were prepared to fight.

“I went and found 2 to 4 inch pieces of wood and gave one to Zach. I tipped two wooden tables up and we waited. About a minute into me looking at the door I realized there was a fire extinguisher sitting in the wall and had another JROTC student come and sit behind the table with Zach,” Haab recalled. “My goal was if the door opened I was going to swing and hit whatever was opening the door while the fire extinguisher would be deployed as a confusion.”

Although the shooter did not go to their classroom, their quick thinking could have possibly saved lives. This experience has also changed Haab’s perspective of life.

“It made me realize how life can change in a second. I was driving home from dinner [a couple weeks after the shooting] and there was a car accident that happened one-fourth of a mile in front of me, and I stopped to check if everyone was ok and give whatever I could to try and help someone if there was something wrong, and thank God there wasn’t, but it just showed how everything can change so quickly,” Haab said. “I’ve lost friends that I won’t ever get to see again and had the honor to lay to rest two of them.”

Quick thinking by students, teachers and staff ended up saving many lives that day, with some risking and sacrificing their own. The actions of Haab and others continue to give the MSD family strength  and prove that Stoneman Douglas is #DouglasStrong. .