Give amnesty to the DREAMers but an axe to the program 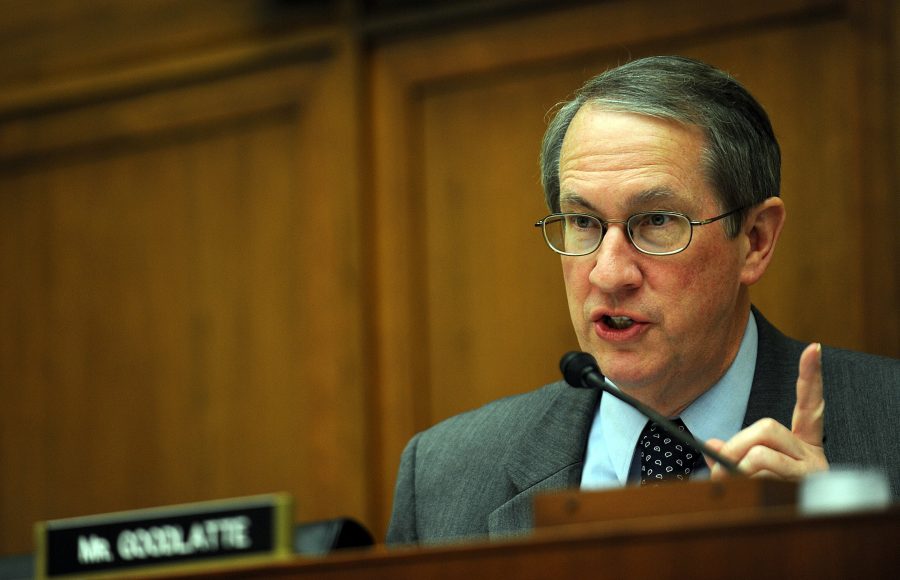 Congressman Bob Goodlatte (R-Va.) during a hearing of the judiciary subcommittee on February 27, 2014, in Washington, D.C. (Astrid Riecken/MCT/TNS)

Anything with the capacity to initiate a government shutdown tends to grab people’s attention.

The specific immigration issue on the mind of Senate minority leader Chuck Schumer, when he led the crusade for the government shutdown, was the lack of a comprehensive immigration deal that included provisions for the Deferred Action for Childhood Arrivals program.

Despite the president vowing to eliminate the program on the campaign trail, in the weeks before his first State of the Union address, the White House proposed a path to citizenship for DACA recipients in return for a limit on chain migration and $30 billion for the president’s southern border wall.

It seems to be the ultimate display of bipartisan compromise — a compromise summarised by Trump during his State of the Union address.

“In recent months, my administration has met extensively with both Democrats and Republicans to craft a bipartisan approach to immigration reform,” Trump said. “Based on these discussions, we presented the Congress with a detailed proposal that should be supported by both parties as a fair compromise — one where nobody gets everything they want, but where our country gets the critical reforms it needs.”

For hundreds of thousands of DREAMers, this is news that could not have come any sooner. Many of them, should they not be granted amnesty, will be deported back to countries they do not even remember. Punishing them is a legally justified moral evil, and their expulsion would be a sacrifice of American values.

The United States blazes a trail into the future, in regards to both the enforcement of its laws and the upholding of its moral values. The people who illegally brought their children into the country, the same ones that will be granted entrance based on chain migration, are the ones that need to be punished. It is they who should be held accountable for their crimes, not their children, and this awkward situation comes as a direct result of the executive overreach that is the DACA program.

It is not a privilege but a duty of the American people to match up to the same level of morality and legality they expect from the countries that follow in their wake. Punishment must be delivered to those who have broken American laws, but the DREAMers are not the ones who broke them. To punish them would be to leave behind a legacy of apathy and heartless calculatorory reasoning, and doing so is against the very nature of what defines humanity.

Do not be mistaken by the concept, however, that codifying DACA into law is the answer to the United States shaky stance on immigration and has the capacity to extinguish the flames of hatred elicited by many Americans regarding illegal immigration. If anything, DACA represents the very spark that ignited such flames.

As a sovereign nation, the United States has the right to decide who comes through their borders, and even if the current legal immigration quotas were doubled, there would still be people who would enter or remain in the U.S. illegally. By enforcing immigration laws, the government encourages people to come to the U.S. legally and discourages illegal immigration.

I am an immigrant who came here legally. I travelled here eight years ago with my parents, who still believed in the “American dream” and had hopes of making a better life for my brother and me. They truly believed that the U.S. was the last place on Earth where men and women, through their own sweat and ingenuity, could be anything that they wanted to be. By breaking American laws and coming into the country illegally, the concepts of freedom and democracy embodied in the constitution are being jeopardized.

Unfortunately, the U.S. government’s failure to enforce immigration laws has inevitably encouraged more and more illegal immigration. DACA is the pinnacle of non-enforcement, as not only does it protect illegal immigrants from deportation, but also it provides benefits that, by law, are reserved for American citizens and legal immigrants. Why come to the U.S. legally if you can acquire many of the same benefits by coming illegally?

A similar program to DACA, the Deferred Action for Parents of Americans and Lawful Permanent Residents, provided administrative amnesty for illegal aliens and gave them work authorizations and access to government benefits. That very same program was struck down by the Fifth Circuit Court of Appeals because interfering with immigration issues not expressly delegated to the president by Congress is a violation of the principle of separation of powers and against the Constitution from which both entities establish rule of law.

Failure to correct this overreach will only set a dangerous precedent that weakens the constitutional balance of powers that has enabled the establishment of the U.S. as the most powerful nation in the history of the world. Amnesty to the DREAMers is a necessity for American morality, but the removal of DACA is a necessity for the American legacy.