Memorial at Pine Trails Park is removed and preserved 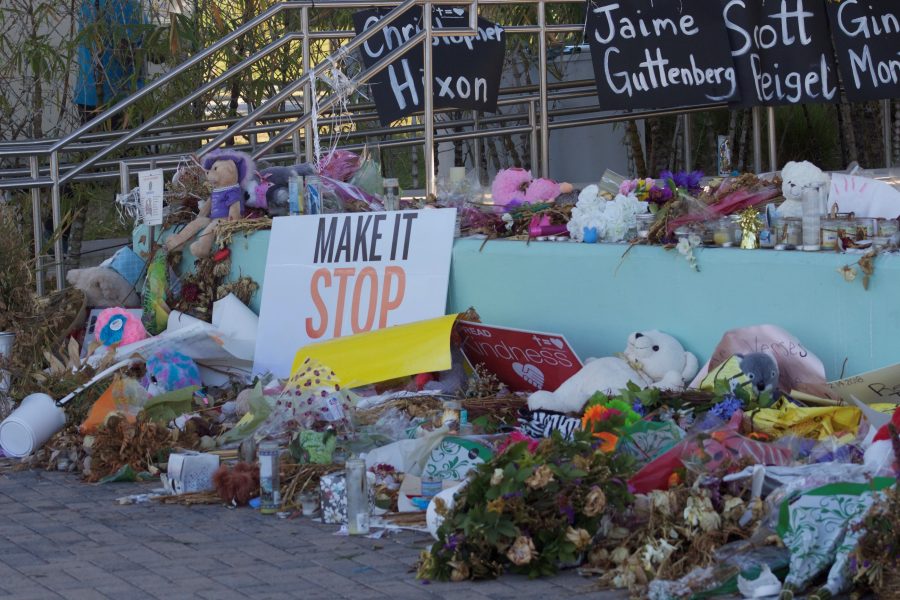 After the tragedy at Marjory Stoneman Douglas High School, memorials were placed in honor of the 17 lives lost at the school in front of the school and at Pine Trails Park. The love and mementos left at these sights were growing each day. On Thursday, March 15, the day after the one month anniversary of the tragedy, the city began the process of taking down these memorials at Pine Trails Park in order to preserve what was left behind.

The City of Parkland has formed a committee that is made up of a variety of people with different roles to handle this task. This includes people representing MSD, a member of the Florida Atlantic University faculty specializing in historical preservation, spiritual leaders and Parkland Historical Society president Jeff Schwartz.

“When you know the sensitivity of this project, we wanted to make sure we were doing this as appropriately and sensitively as possible,” Parkland Public Information Officer Todd Deangelis said. “So, we have a nice sampling of people who can put their heads together and make the decisions that are in the best interest of the community and the preservation of the items.”

Before beginning their project, the victim’s families were contacted and informed of the committees plans. All of the families were supportive agreed that the time was right to carry out these plans.

On Thursday morning, a meeting led by Schwartz and City Commissioner Ken Cutler was held with volunteers to direct the process of taking down and preserving the memorials.

There were multiple different items left at each memorial, even packages of the victims favorite food. Organic materials from the memorials such as flowers will be collected and incinerated. The ashes will then be used for spreading around 17 trees that will be planted at Pine Trails Park. However, not all of these items will be able to be saved or used to certain damages from mold or weather.

“Everything that we do today needs to be documented and photographed. The photo documentation is very important because we can say that items not saved were a part of the memorial,” Cutler said during the meeting. “The person that put that there will still have their memory captured by that digital image.”

The angels, provided by the City of Sunrise, will be given to the families if they decide to keep one. As for the rest of the items, they will be stored in an air conditioned and climate controlled room until it is decided where to display them. Schwartz hopes that next year there will be an official preservation or museum where the items can be displayed.

“The families and first responders will be the first invited through, and then it will be open to the public,” Schwartz said. “Those items — the signed basketballs, the signed baseballs, sneakers, pictures — those are the things that will bring the same tears a year from now, ten years from now, that they bring today.”

“The committee will be particularly sensitive when removing the items at Douglas because the students are walking past it everyday,” Deangelis said. “We want to make sure that is done with the students in mind and ideally with some student assistance.”

For senior Hanna Karcinell, it will be hard to see the memorials go so soon. They helped her to deal with their grief while also honoring the lives of the victims.

“It will be hard because going to the memorials sort of helped with the healing process,” Karcinell said. “A lot of my fellow classmates and I visited the memorials to commemorate the victims’ lives.”

Senior Lex Michael notices how many are still grieving and believes that a month is too little time to keep them up.

“I think a part of this movement was to not let anyone forget the victims names this time, and putting up some sort of museum so people can see the memorials might be a good way to do it,” Michael said.

After this tragedy, Parkland continues to stand strong and united. The future permanent memorials will be a reminder to all what Parkland has been through, fought for and accomplished for generations to come.