MSD receives mail from all over the world 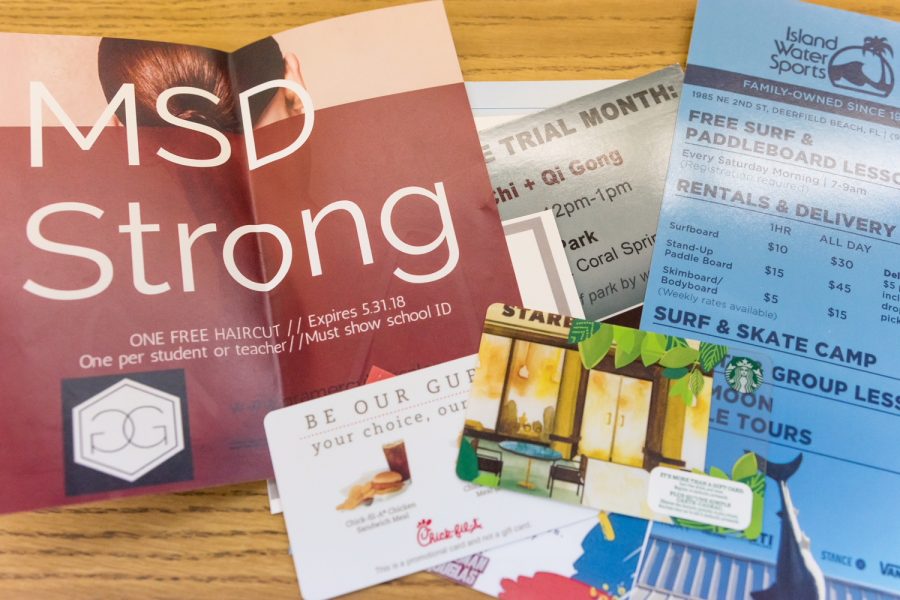 Since the tragedy that occured at Marjory Stoneman Douglas High School on Feb. 14, schools and individuals from around the globe have been showing support by sending in mail and banners to the school, teachers and students. Through this simple act, this mail has shown MSD students that they are not alone and have a whole nation supporting them through this rough time.

Banners that were given from schools across the U.S. surround MSD, displaying quotes like “peace for Parkland” and “we stand with MSD.”  In addition to letters with messages of support, students and teachers have received pins, coupons, bracelets, stickers and food.

“It makes me realize that all these other students across the world care about us,” sophomore Danielle Rittman said. “All of the signs and letters I have seen are really inspirational and send a positive message.”

Some teachers in particular have been receiving a plentiful amount of letters, packages and other gifts of kindness. AP World History teacher Diane Wolk-Rogers has gotten an abundant amount after reaching out on an AP World History Facebook page asking fellow teachers to have their students write letters to her students. Some of the teachers that saw the message from Wolk-Rogers sent it to other people they knew.

“Within two days, the message had gone viral,” Wolk-Rogers said. “Because of that, we have received letters as far away as New Zealand, Pakistan and Ethiopia. We were getting thousands of letters each day.”

Some students, like those who have worked on the Never Again movement, have also been receiving mail from people who sent them to the school. Junior Jaclyn Corin, who helped organize the March For Our Lives, appreciates support from others beyond her social media page.

“It’s nice for me to sit down and read the heartfelt messages that people took time out of their days to write,” Corin said. “You can see when it’s from sweet little kids, and they draw a picture of themselves or if its from veterans who actually give some good advice.”

However, all of this mail has become a whole other activity for front office workers like office manager Teresa Basilone. The post office gave the MSD front office machinery like slots and carts with large bags to help sort through all of the mail. Basilone along with other staff members have been working for 12-13 hours a day in an effort to sort through the continuous flow of mail.

“We have to open everything that we see,” Basilone said. “If it’s addressed to a specific teacher or student, then we don’t open it, but other than that we have to make sure that there’s nothing inappropriate written on the banners. With the letters and packages, we have to scan them for dangerous or triggering items and words, along with money and checks.”

The office has received nonstop mail since the tragedy. Though the mail is sent with love, care and concern, it is a hassle to get it sorted and stored each day, according to Basilone.

“There’s mixed emotions getting all of this mail,” Basilone said. “It’s crazy, it’s overwhelming at times, it feels nice, but there’s so much work to be done in such little time. The post office has been sorting a lot before it gets here, but we always have to look it over because we have found stuff that hasn’t been sorted correctly.”

Because of the large quantity, some mail is even stored at a local warehouse. Most staff and students did not expect to get the enormous amount that they did.

“My goal was for each of my students to get to read three letters each. I didn’t realize how much I was going to receive,” Wolk-Rogers said. “Even if we can’t read all of the letters, it’s very cathartic for the kids who wrote them. It gave other students who wanted to reach out an opportunity to do so because they got to put their thoughts and feelings into it.”

Though it would not be practical for everyone to get to see and read every single letter, banner and package, the overall message sent to MSD remains clear and positive. These messages have shown MSD that they are not alone in this tragedy, and they have the whole world thinking about them.