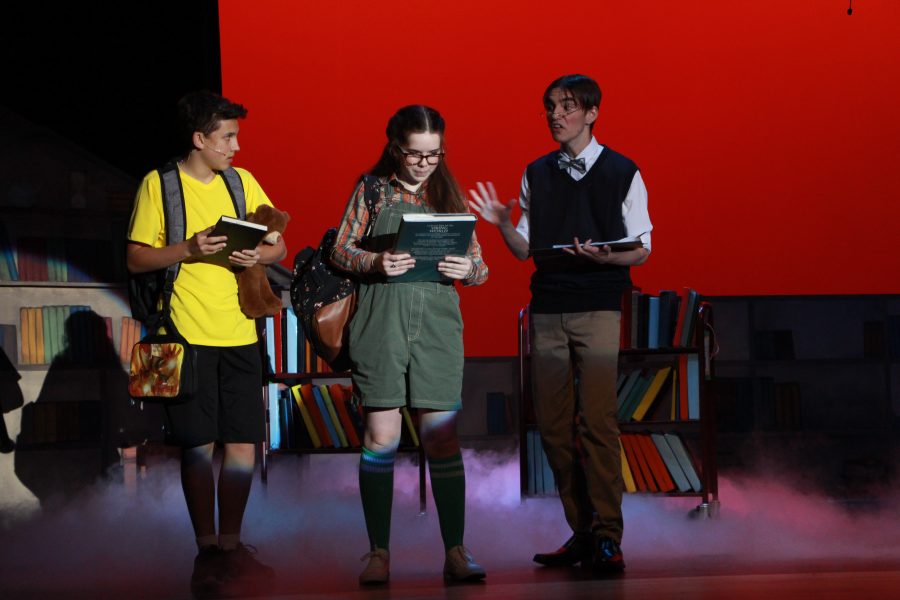 Drama students rehearse for the one-day performance of "Yo, Vikings!" Photo by Rebecca Schneid.

On April 13, Marjory Stoneman Douglas High School’s drama program performed “Yo Vikings!” The musical is an adaptation of a book by Judith Schachner and is appropriate for viewers of all ages. The show has major themes of self-acceptance and acceptance of others. The performance was a one-night-only show, but it still garnered a large audience.

“Yo Vikings!” is a story of a young girl, Emma, who doesn’t feel like she belongs. She and her wild imagination take her on different adventures based on what she is learning in school. Not knowing who she really is, Emma gets carried away by a school project. In the end, she has to learn to come together with her community and save the town library.

“It put how people think of themselves in perspective,” freshman Lily McGee said. “And it shows  you really shouldn’t really care about what people think. You should find who you really are and find what you are passionate about and really do something about it.”

The main character, Emma Katz, is played by freshman Ally Reichard, who captured the childish persona of the character. In the first song alone, Reichard had around seven costume changes.

Junior Alexander Athanasiou, playing the part of Mr. Sigurd, only had 10 days to memorize his lines, songs and dance moves due to other cast complications. Though it was very stressful, his motivation and love of theater helped him through it.

“The journey was really rough, but it was really fun,” Athanasiou said. “I’d do it again in a heartbeat.”

The director, senior Ariel Braunstein, helped to create a  magical ambiance to fit the theme, with fog machines that caused the set to look mysterious and mystical. She helped the cast and crew get back into the groove and get their motivation back after Feb. 14.

After the final bows, drama teacher Melody Herzfeld came out, standing with the rest of the cast as the crowd cheered. The cast and crew began to create a giant group hug around her. She then went on to give a very heartfelt and emotional speech. She also talked about the 12 seniors on the cast and crew, telling stories about their years with the drama department.

“I gave a vote to the kids and asked them if they wanted to continue what they started and they said yes.” Herzfeld said. “It was very difficult for kids to come and rehearse but once we started rehearsing, they started finding a lot of joy in coming and feeling safety again.”

This show was a great last performance for this year’s drama club and its seniors.