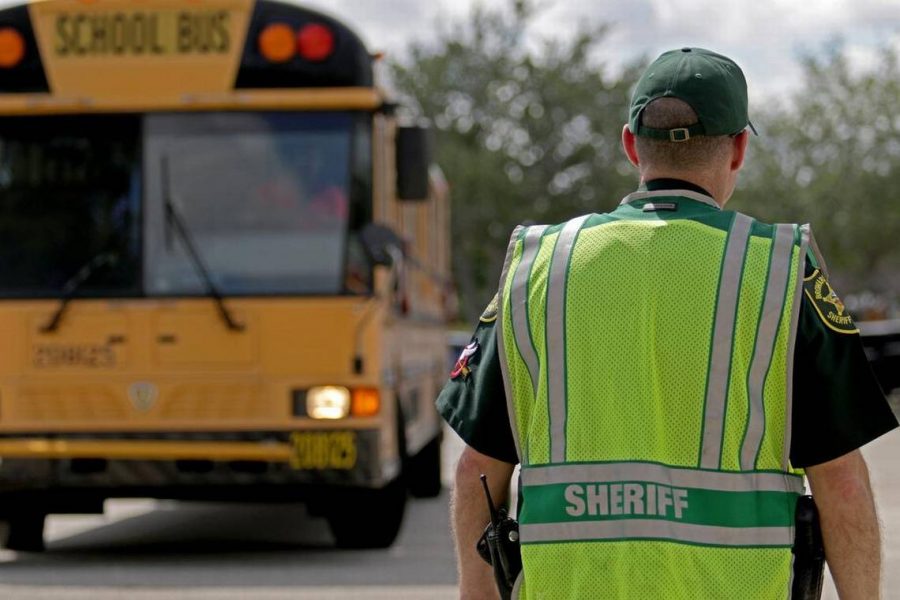 A deputy with the Broward County Sheriff's Office directs traffic outside of Marjory Stoneman Douglas High School in Parkland, Fla. on Monday, April 2, 2018. Extra security is one of a number of security measures the school district has enacted as a result of the Feb. 14 shooting at the school that killed 17. (John McCall/Sun Sentinel/TNS)

Time and time again American schools are struck with tragedies that have seemingly become a common occurrence. After each one of these terrible events, America is faced with a question: How do we stop this from happening again?.  When the events on Valentine’s Day unfolded and America had seemingly failed once again, a new debate on how to protect defenseless students in school sparked once more.

School shootings have occurred throughout the history of the U.S., but one in particular would define the new generation of mass shootings: the Columbine high school massacre. It was one of the first school shootings to reach mass status (with a few beforehand) leading to the deaths of 13 students and staff and the injury of 21 others. Although America sought to prevent this from happening again, it continues to happen.

The Columbine High School Massacre happened 19 years ago, yet school shootings are still a recurring issue. That derives from one major problem: People do not find a common ground when it comes to solutions. This stems from the gun control debate, which seemingly takes over every single discussion and usually leads to endless discussions that fizzle out with little progress made, regardless of one’s opinions on gun control this is something both sides have to admit.

People tend to focus more on advancing their political party’s agenda or idea instead of looking for a solution both sides can agree on. However, one potential solution that would be able to save lives and receive bipartisan support is school safety reform.

School safety is not only a bipartisan solution to the ongoing school violence problem, but an important one to simply help those in school be safe. Regardless of what gun control legislation is passed, evil still exists in the world and school shootings and school violence will still happen. Each and every school in America should be prepared for any situation.

How each and every school should be prepared is different on a case by case basis. However, there are some measures that could apply universally depending on costs. Those measures would include:

ID tags to prevent trespassers from entering on campus.
Ability to cover door windows easily in the event of a school lockdown to block the view from the outside.
Applying chicken wire glass (wire strands behind or between glass) on door windows to prevent entry if the door glass is broken.
Implement quick bag checks.
Making limited entryways in schools to efficiently check IDs and bags.
Adding more School Resource Officers in schools to be able to respond to any threats quickly.
Signing up for the Aaron Feis Guardian Program which allows school boards to decide whether or not they allow school staff who meet specific requirements and training to carry a firearm on campus.

Although the funding may currently not be there to fund these programs, there needs to be a push to allocate funds in order to save our schools.