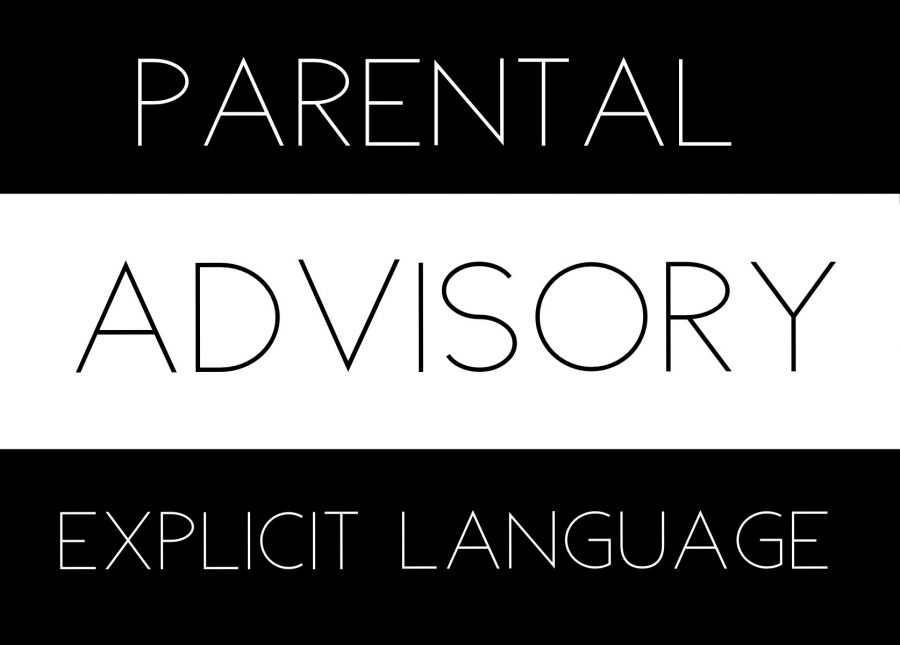 Listen up! Albums with explicit language are required to have this stamp on the cover.

Music lyrics have dramatically changed over the past four decades. This change has become a concern among some parents and doctors. Many artists, such as Post Malone, reference drugs, sex and violence in their music.

“This is why we have all the problems we do,” marketing teacher Diane Spence said. “Kids today are more affected by entertainers, so therefore they are going to act on the words they hear.”

In one of Post Malone’s popular songs, “Rockstar,” violent events are depicted.  He sings,“when my homies pull up on your block they make that thing go grata-ta-ta,” referencing the sounds of a gunshot. This alludes to the singer and his friends open firing in a neighborhood. Later in the song, he puts his own spin on sex, drugs, and rock and roll.

“All my brothers got the gas and they always be smoking like a rasta,” Malone sings.

These words can be attributed to the “rockstar lifestyle.” From songs like these, young boys may get the wrong idea that treating women poorly and engaging in drug use makes them popular.

“I don’t think it affects people at all,” junior Arianna Otero said. “It’s not brainwashing anyone, and any sane person realizes that it’s just lyrics.”

Ninety-seven out of 100 students report that they listen to music while engaging in other activities. While they listen to violent lyrics, their brains are occupied with other tasks. With this in mind, it is possible that lyrics are not as influential as the media or video games, according to the National Center for Health Research.

“I think lyrics have the ability to empower people or put them down,” sophomore Avril Englehart said. “But actions are choices we make ourselves.”

A study done by Sage Journals, an academic publishing company, sheds light on how music affects our perception of people. According to the study, after listening to songs with misogynous lyrics, men acted more aggressive towards women than those who did not listen to these songs.This reaction came from the power men feel they have after hearing misogynous songs. Women had a similar reaction. After listening to songs with misogynous words, women were more aggressive towards men.

One song that is degrading towards women is “Blame it On the Alcohol” by Jamie Foxx. Throughout the song, Foxx goes on to describe how he gets a girl drunk at a party. He keeps giving her drinks, hoping that when the night is over, she will be too drunk to comprehend what is happening. This negative behavior is that of a date rape.

“See what we can be if we press fast forward, just one more round and you’re down, I know it. Fill another cup up, feeling on yo butt, what? You don’t even care now,” Foxx sings.

The opinions between teens and teachers vastly differs. While teachers and other adults view these violent songs as harmful, kids enjoy these kinds of music and do not believe the words will affect their behaviors. Kids and adults will always disagree about what is appropriate in entertainment, but rappers and singers will create their music to please popular culture.