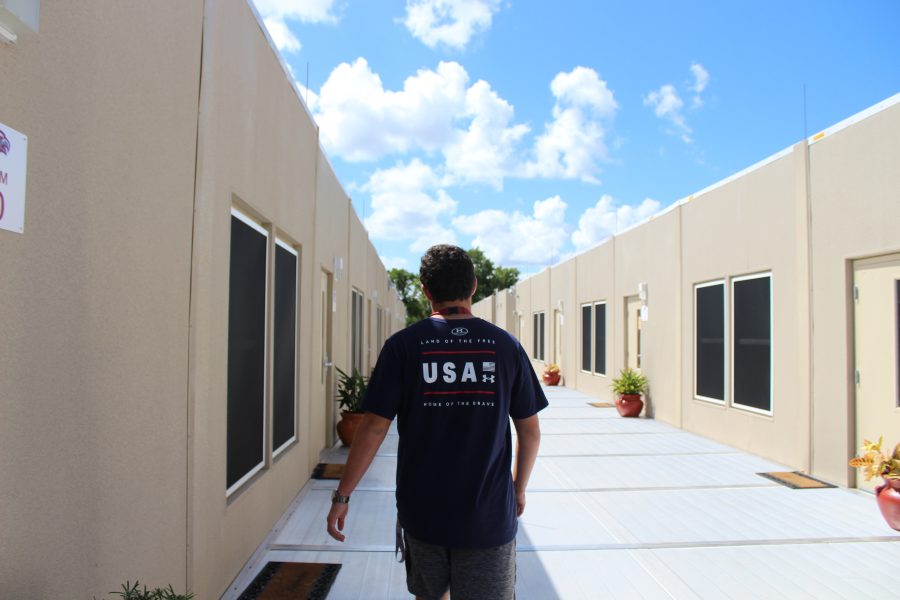 Many teachers found themselves without a classroom last year; some came from the 1200 building and others were moved around in order to accommodate those who lost their rooms. Teachers who had to change rooms frequently pushed carts full of supplies and technology around the school. In order to solve this issue, 34 portables were leased to Broward County Public Schools under a $2.5 million contract with California-based vendor Mobile Modular Management Corp.

Of the 34 total portables, 30 are classrooms, two are bathrooms and two others make up the school’s new wellness center, which is located in a separate location from the rest. The other 32 portables are situated together on top of the school’s former basketball courts.

These portables are just a temporary solution to Marjory Stoneman Douglas High School’s classroom shortage, as plans for the construction of a new building have already begun. Alongside Principal Ty Thompson, the new Principal on Task Assignment, Teresa Hall, oversaw the installation of the portables over the summer, which involved hours of work for the crew as they were working on an advanced timeline.

The portable installation began on Aug. 7. The process was completed when code inspectors gave the approval for teachers to begin moving in on Aug. 10.

“It happened quickly,” Hall said. “It was truly amazing to watch it go through the stages. The staff out there just put a lot into having it ready.”

The new portables save teachers the stress of floating from classroom to classroom after each period.

“I moved around at the end of the year last year, and I was just really happy to have a permanent home,” English II and creative writing teacher Stacey Lippel said. “Anything is better than floating around.”

The new temporary classrooms are modern compared to those from previous years. Features of these portables include a thermostat that teachers are able to control themselves, a space that is very open and clean and large windows that let in a lot of light.

“I like having my own space. It’s very private; it’s very bright,” Lippel said.

The community of portables has been dubbed Eagle Village by the teachers who now have a classroom there.

“Mrs. Hall first said Eagle Manor, but the teachers said manor sounds like an old folks home… We are a village and now we call it Eagle Village,” said Assistant Principal Denise Reed. “The teachers out there came up with that. They wanted it to be fun and something they could relate to.”

While the portables solve the classroom shortage problem, there have been some concerns from students and teachers about the need for a covering over the portables to protect them from the sun and rain.

According to administration, this problem will be met with a solution in the next few months, as a canopy that will cover the portables was ordered to shield the temporary buildings from harsh weather conditions.

Security and safety measures have increased significantly since last year, and some students and faculty have had concerns about whether or not the portable classrooms themselves are safe. While some of the features of the portables are discomforting to some, many teachers are still content in their new surroundings.

“Once you shut the lights off and close the blinds, you really can’t see in there at all. It’s just so dark. I was comforted to know that,” Hall said.

Lippel, who lost her classroom in the 1200 building, feels the same level of safety in her current classroom.

“We have to trust the security measures we have in place,” Lippel said. “I don’t feel any less safe than I would’ve felt in the main building.”

The main goal for Lippel and other teachers in Eagle Village was to create a comforting space for both themselves and their students, where the environment could be peaceful and productive.

“Because I spend a lot of time here, I want it to be a place I enjoy being,” health and fitness teacher Marilyn Rule said.

Much of the staff who now teach in Eagle Village have decorated their portables in a way that is unique to themselves.

Math teacher Cindi Halverson has decorated her room by hanging up a long tapestry with vibrant blue waves across her wall.

“It made it my serenity. I love the ocean and the beach,” Halverson said.

Lippel also has a variety of decor in order to create the same effect for herself and her students.

“I have created a zen environment, where I always have lavender flowing in my diffuser, I have nature inside as well, with some fairy lights… it was really important to me to make it feel warm and inviting,” Lippel said.

The portables, though smaller and farther away from the main buildings of the school, are described as bright, clean and spacious inside by teachers who have moved. While this is only a temporary plan before the new building finishes with construction, Eagle Village is working as a successful substitution, providing a necessary atmosphere suitable for both the teachers and students.